BMO Harris Will Back Ballet

In its first major corporate benefaction since it took over the M&I Bank, BMO Harris announced on Wednesday  that it would provide major sponsorship of the Milwaukee Ballet’s “Nutcracker,” a longtime staple of the Milwaukee holiday cultural scene. The announcement was made at Red Arrow Park, across the street from the Marcus Center for the Performing Arts, where the 43rd annual season of the ballet will take place December 14th – 27th, 2013.

It takes about 250 people on stage and behind the scenes to put on the Nutcracker, said ballet Artistic Director Michael Pink, now in his 10th season at the helm of the company that was founded in 1970. These include 130 students from the ballet’s school, 45 dancers, a live orchestra and a children’s chorus.

At the event, organized by Mueller Communications, boss H. Carl Mueller chatted with Pink and Kara Kaiser, the regional president of BMO Harris Bank who made the announcement. Several dozen other folks strolled through the space while young students dressed in costume handed out candy canes (“it’s not too early to think about snow,” Pink said) and 2-for-1 vouchers for the ballet. The ballet also offers a buy-one-get-one-half-off promotion from September 9th-11th. 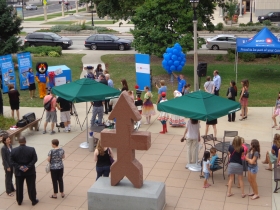 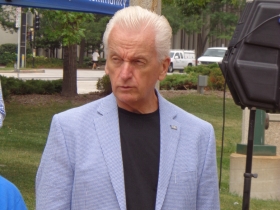 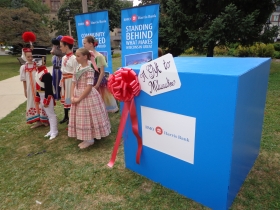 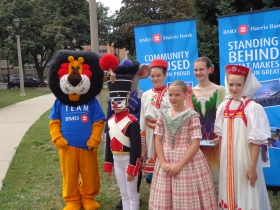 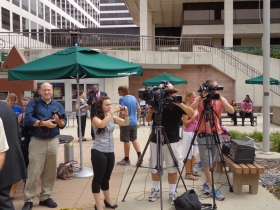 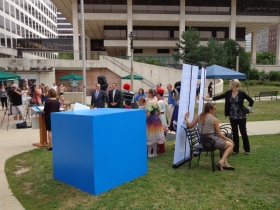 3 thoughts on “Photo Gallery: BMO Harris Will Back Ballet”