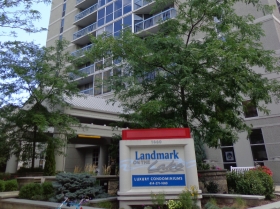 Landmark on the Lake. Photo by Michael Horne

WTMJ (Ch.4) evening news anchor Mike Jacobs celebrates 36 years at the station today, Friday, August 16th 1977. “I’ll never forget it,” he writes in his station biography, “It was the day Elvis died.” On Halloween, 2007, Jacobs and his wife Linda swapped a Mequon River view for a 14th floor condominium unit in the Landmark on the Lake, just steps away from the riches of the Brady Street neighborhood. He leaves behind his suburban colleagues like Susan Kim and Carole Meekins for the gritty reality of the Big City, and a much shorter commute to work.

The Jacobs condo crams 3 bedrooms and 2 full baths in its cozy, 1157 sq. ft. setting in the 277-unit, 27-story high-rise built as apartments in 1991. It was assessed at $462,000 when “Michael R. & Linda Jacobs Trustees of Michael & Linda Jacobs Living Trust” inked the deed. It has lost value every year since. Today the Jacobses own $12,900 worth of the land beneath them along with $316,900 in improvements, for a total valuation of $329,800. Taxes on the property are $9,798.46 and are paid in full. The Jacobs domain also includes two parking spots, as well as two storage units which are likely crammed full of the awards and trophies bestowed upon Jacobs over the course of his career. Should the fancy for tennis strike him, Jacobs can indulge it on the building’s court. Or perhaps he might care to join other residents like Dan and Judith Steininger for a splash in the pool. Sadly, though, there is no clubhouse in the building, so entertaining is strictly home-based.

It takes a certain amount of presumption to name a building “Landmark,” especially when it’s crammed in cheek-by-jowl with other similar structures. True, it is on The Lake [Michigan], but its landmark designation is not likely to occur anytime soon. The structure, with its stark precast corrugated panels and sky-blue balcony railings, has the good sense to be not-too-obtrusive on this grand one-way street. Architects Loewenberg Fitch of Chicago pretty much simply knocked off a copy of some of their undistinguished Chicago high-rises of the era.

Prospect Avenue had hit a rut around the time this building went up. I know this from personal experience, since I was the last tenant in each of the two buildings that were demolished to create the site — a decade apart. Around 1977 I visited a friend who lived in the south half of a side-by-side 19th century duplex on the north end of the site. It was winter, and there was water coursing through the vacant north half of the home. I went in, shut off the water supply and contacted the owner (in that order.) Shortly thereafter, I moved in, taking a lovely master bedroom with an elegant deck overlooking the Milwaukee Yacht Club. I resided a year or so in the place, happily transforming it into a sort of flophouse for other Mequon emigrees and the occasional passing stranger, including a couple of youths who came to Milwaukee from England strictly to raise hell. There was nothing much worth talking about on Brady Street then. An adventurous Mimma Megna had opened a tiny cafe at the southeast corner of N. Arlington Pl. and E. Brady St., since considerably expanded. Glorioso’s Italian Market and Sciortino’s Bakery were there; but not much else. But it was about that time when Julilly Kohler took the bold leap of moving to the neighborhood, spearheading its redevelopment with a few catalytic projects in the sadly neglected buildings of the day, and generally waking things up to the point that the neighborhood is a desirable home for TV Anchormen and other exalted children of fortune.

But in the 1970’s and 1980’s cars would drive over the sidewalk to park on the property. “Vacant lot unimproved mud on sidewalk remove vehicles from lot,” ordered the building inspector in 1971.

The estate of Louise S. Quarles was ordered to “discontinue parking” in 1975. By 1978 the home was owned by Jerry Cohen of Major Goolsby’s, and he as well was cited for conspicuous vehicular parking.

My next adventure with the site came around 1988, when I moved into the building on the south half of the property. By then the northern one was long gone. My new building consisted of 8 one-room apartments, and one 8-room apartment, which is the one I snagged. It consisted of a fair chunk of the original Heinemann mansion, along with a crazy 1950’s bachelor pad three level addition built onto the bluff on the east side of the building. It had 3 bedrooms, 3 bathrooms, Pecky Cypress paneling and a stone terrace overlooking the lake and my beloved yacht club. Although it had an automatic dishwasher (my first!), I had to rely on coin-operated laundry facilities. I solved my quarter shortage by installing a coin-operated pool table in the old dining room, floored in maple with cherrywood accents. It again took on the character of what you might call a “party house,” for which I have no regrets. Memories of the party there after the Pink Floyd concert at County Stadium remained acid-etched in my brain.

I especially enjoyed election day when living in either of my lakefront homes. My fellow residents and I would walk up the block to the Alonzo Cudworth American Legion Post to cast our ballots. We would then go downstairs to the bar and watch Mike Jacobs deliver the results live and on the air. I was thrilled to live in a city where ballot boxes coexisted with barstools under one roof.

In 1983, the property was owned by Richard Felker of the Colder appliance family, who proposed a surface parking lot for 60 cars on the site. The city turned down this absurd proposal for a lakeside parking lot.

There was some talk of getting a historic designation for the battered old mansion, but its days were done, and so was my lease. A proposal was floated to build a 27 story, 275 unit apartment building and 18 unit townhouse on the site. The latter part, never built, apparently was proposed for the site of the Milwaukee Eye Care Associates clinic, still standing. But the $31 million highrise was built by Lincoln Landmark Venture’s Dennis Klein, with partner Richard Felker.. The structure is fire-resistant, with 4085 sprinkler heads, 71 hose valves and a fire pump.

Mike Jacobs is the longest serving TV news anchor in Milwaukee, having joined the station on August 16th, 1977, back when stock in the Journal Company was employee-held and worth something. He became anchor in 1978 after a very brief apprenticeship. Jacobs hails from the farm town of Hubbard, Iowa, where he delivered copies of the Des Moines Register to subscribers in the 6th grade. He went to Drake University, becoming a cameraman on WHO-TV.

Established at WTMJ, Jacobs maintains a “non-stop pace,” anchoring Live at 5, Live at 6 and Live at 10 for those lucky enough to receive a signal from the station. (Sorry, Time-Warner subscribers, but you are out of luck if you want to catch the latest in Jacobs.)

According to his biography, Jacobs has conducted “captivating jailhouse interviews with convicted cop killers.” You know — the kinds of folks Jacobs calls “real people.”

Jacobs and his wife have two grown children. He cites his family and soccer as among his passions.

Jacobs Not the First TMJer at Landmark on the Lake

Mike Jacobs is not the first WTMJ reporter to live in the Landmark on the Lake. His colleague Lynise Weeks lived in unit 1207 until her untimely death at 41 on July 28th, 2005. Weeks had been in ill health for years with diabetes, lupus and kidney problems. She received a double kidney transplant in 2003, and worked as a consumer reporter when she could. She also was very public with her health issues. It was a truly tragic situation.

At the time of her death, Jacobs said, “People saw she was a regular person. She loved Milwaukee. And Milwaukee loved her.”

His words were not those of a colleague called upon to utter a touching sentiment, but those of a genuine friend.

The proof of this assertion can be found in the Weeks probate records. She nominated Jacobs to be her personal representative. It took a couple of years to distribute the estate to her heirs, minor nieces and nephews, and it appears from the record that Jacobs executed his duties faithfully.

This generous and voluntary act increased the children’s inheritance by a couple thousand dollars. Such a man is Mike Jacobs.

How Milwaukee is it? If he hoofs it, City Hall is just 1.45 miles away. 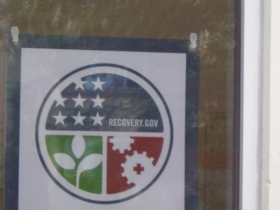 Why is this sign here? Photo by Michael Horne.

There is a sign for Recovery.gov in a lobby window of the building, but it could not immediately be determined if this was a show of patriotism or a sign of government investment in the condo. 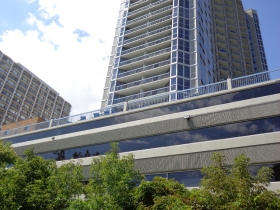 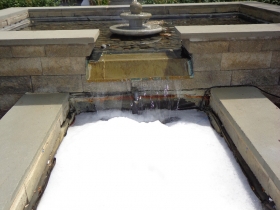 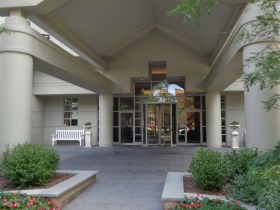 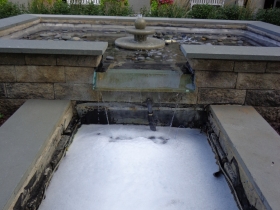