All the news on the GMC's new home, as well as odds and ends around the East Side and beyond (plus a bicycle tour).

The facility, known popularly as the Water Accelerator Building, is a project of the Milwaukee Water Council, and featured the renovation of a 7-story, 98,000 square foot, “brick and timber warehouse into a first-class office and research facility dedicated to our most precious natural resource:  water,” according to the council’s website.

The GMC, headed since 2002 by House Confidential honoree Julia Taylor, championed the Water Accelerator. The GMC “bootstrapped” the council for its first few years until it grew up and got its own 501(c)3 status.  Taylor is Treasurer of the Water Council, which should have helped in her negotiations with her new landlord.

Rich Meeusen, head of Badger Meter, Inc. is the Chairman of the Water Council, as well as the Vice-Chairman of the Greater Milwaukee Committee, so he probably gave his OK to this lease at some point. (This is a terribly efficient city when it comes to folks in power working cooperatively amongst themselves.) 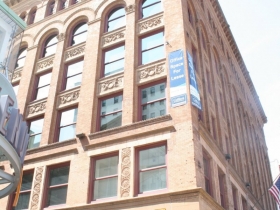 The Matthews Building on W. Wisconsin Avenue, the soon to be former home of the Greater Milwaukee Committee. Photo by Jeramey Jannene.

The GMC currently leases its space in the Matthews Building connected to the Shops of Grand Avenue, renting it from Wispark, the development subsidiary of WE Energies. The group plans to be in its new quarters beginning August 23rd, 2013, according to Leah Fiasca, who was profiled as “Newaukeean of the Week in Urban Milwaukee” this week.

There will be a grand dedication of the accelerator building Thursday, September 12th, 2013, from 4 p.m. to 9 p.m., according to Meghan Johnson, who was hired in July to be the spokesperson and membership coordinator for the council. Cost of the event is $50 and will include such entertainments as Mayor Tom Barrett cutting the red ribbon with his silver scissors, always a crowd-pleaser.

Directions to the place couldn’t be simpler — first, just find E. Pittsburgh Ave. and follow it west. Once it becomes W. Pittsburgh Ave., travel one more block west until you get to W. Freshwater Way, itself just one block long. New city street signs have been installed on this dead end street that is one day expected to traverse the adjacent Reed Street Yards, which have been largely idle in our lifetimes.

Skyline is the Limit

Tom Schneider, the head of COA, says that 650 people (a light crowd) attended the Skyline Music Series concert last evening, Tuesday, August 13th, 2013 at Kadish Park. Once again, Bud Selig was not one of the attendees at the Selig Joseph Folz amphitheater. Will he ever see the concrete results of his generosity? Schneider takes a headcount at each concert, and is really good at it. He says this season has seen 4300 attendees, just shy of last year’s record of 4500, so if 200 people show up next week for the final concert, it will set a new record. This is the seventh season for the outdoor music series, which as we see, has drawn thousands of people to the once-deserted park. There has not been a single reportable incident in all that time, he said. Not too many years ago, “if you had two people in the park you would have had an incident,” the retired U.S. Attorney said.

Schneider keeps up to date with his old profession, mentioning that he had seen that day news that Attorney General Eric Holder had finally announced that the federal government spends too many resources and money locking up nonviolent drug offenders. He said, “Eric was the U S Attorney for the District of Columbia when I was U.S. Attorney” for the Eastern District of Wisconsin under Bill Clinton. 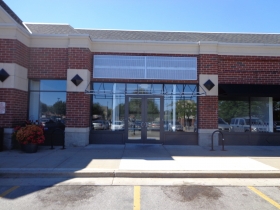 The 5 Guys Burgers and Fries is closed at East Pointe Marketplace. Photo by Michael Horne.

Sobelman’s Tallgrass Grill, which served high-class burgers at 1952 N. Farwell Ave., at the deadly intersection with E. Irving Place has been closed for a couple of weeks. The original Sobelman’s at 1900 W. St. Paul Ave. and its Marquette branch at 1601 W. Wells St. remain open. …  In other burger joint-closing news, the Five Guys Burgers and Fries at East Pointe Marketplace, 600 E. Ogden Ave. has closed, leaving only its red and white checkered tiles in place. Gone are the sacks of potatoes and the Coca-Cola dispensers. A worker there said corporate told them to shut down since they weren’t making the numbers. This might have shown some misunderstanding of the market on the part of corporate, since Five Guys relied rather heavily on MSOE students, who are scarce this time of year. Also, the Five Guys probably didn’t research the neighborhood well enough. AJ Bombers is just a few blocks away, and it is celebrated for its burgers and for the fact that you can get a beer with your sandwich. The Points East Pub, in sight of Five Guys, at 1501 N. Jackson St. likewise sells well-regarded burgers and beers. At either of those two locations, you could have a beer and a burger for less than the cost of a burger and Coke at Five Guys. We’ll see who is next at that spot. … The Sendiks on Oakland, owned by the Nehring family, now offers parking in the new structure built to the north of the Shorewood grocery. The structure and its associated building includes apartments and a new Walgreens store. … The Sendik’s in Bayside, 340 W. Brown Deer Road, reopened Tuesday, August 13th, 2013 after being closed for several months. It is now operated by the Balistreri Sendik folks, who bought it from the Downer Avenue Sendiks. The store was originally a PDQ convenience outlet / gas station, and has undergone a number of renovations over the years. Now that 80 percent of gasoline purchases are made at the pump, the shop lost most of the convenience store trappings like maps and travel items (nobody was going in to buy that stuff). There is an added checkout counter, greatly expanded liquor selection and other changes here. The most recent addition included a considerable expansion to the building to 7,500 square feet, and a “2 Go” concept featuring lots of prepared foods, which is just what is needed in that land of $100,000 unused kitchens.

My Bicycle Tour of Milwaukee History This Saturday

Let’s gather Saturday, August 17th, 2013 at Discovery World where I will lead a  bicycle tour I researched on the bicycle history of Milwaukee, a rich history, indeed. After consultation with old maps, city directories and other primary source documents, I was able to put together a neat 4.5 mile run that goes past a number of places pivotal to Milwaukee’s bicycle history, particularly that of the late 19th century, when biking was the rage. We will visit the site of the C. J. Smith and Sons plant on S. 1st St. where the first hollow front fork for a bicycle was invented. C. J. and his sons eventually became the largest manufacturers of bicycle parts in the world, before selling that business in the 19th century. The firm is now known as A O Smith, and will have a presence at the Water Accelerator Building, which is also on the tour. We will also see such spots at Andrae Electric, which sold bikes and gave us Terry Andrae, the famous racer, who was later reincarnated as a State Park. We will see where Lindsay brothers warehoused bikes from the Alpha to the Zephyr, and a couple of other places like the Bicycle Clothing Company, the Japan Enameling company and others. We will see the building (still standing) where Huseby Co. made its aluminum and bamboo bicycle in 1897 and wrap up the afternoon near where we began with drinks at the Swingin’ Door Exchange, 225 E. Michigan St. in the 1879 Chamber of Commerce building. In the 1890’s this was the Western Union Telegraph office in Milwaukee (the safe is still there) and was the birthplace of the bicycle messenger industry. An 1894 photograph of the messengers, led by Edward Steichen (yes, that Edward Steichen) hangs on the wall there, along with a more recent photograph of today’s messengers, who still call the Swingin’ Door home. The tour is sponsored by Historic Milwaukee, Inc. See you there!

Well, until next time, that’s plenty.

2 thoughts on “Plenty of Horne: Greater Milwaukee Committee to Move to Water Accelerator”