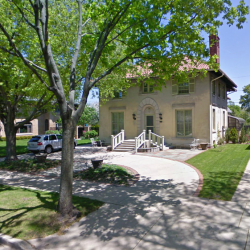 Greater Milwaukee Committee President Julia H. Taylor bought this East Side home for $625,000 from a very motivated seller in 2004. The previous owner, Fred Kessler, had to move to the far west side when he was elected to represent the residents of the 12th district in the assembly.

Kessler and his wife Joan, a state appeals court judge, had lived in the 4,750 square foot cinderblock and stucco home since at least 1985 and made many improvements to the structure, built in 1922 for C. Kron.

For example, in August 2000, the Kesslers took one huge bathroom and turned it into two large bathrooms at a cost of $15,000. In May, 2001, the Kesslers did a partial kitchen remodeling, followed later in the year by a $16,000 project that brought them a new kitchen with “green stained cabinets, granite counters, stainless steel sinks, Bosch dishwasher, stainless steel professional range with vent hood,” according to the assessor’s report.

A “solarium / sunroom is considered a living area,” the assessor noted, adding that the “solar room … has hot tub.”

In 1985 the Kesslers installed a new furnace to pump hot water through the building’s radiators, but they refused to allow the building inspector into the home to check on the condition of the work. This brought a stern rebuke from the inspector, who wrote, “the permit will be marked ‘closed — no final inspection due to owner’s failure to provide entry.’ Claims will be denied. … This letter will be made a permanent record in the department,” and indeed it remains on file to this day as a testament to one man’s defiance of the bureaucrats.

The home’s cinderblock / stucco construction is more typically found in cities like Chicago or Washington, D.C. where a premium is placed on premium construction, and fire codes prohibit frame construction, which even when coated with a frosting of stucco, is the norm here.

The home has 2,269 square feet of living area on the first floor, including the hot tub room, and 2,481 square feet on the second floor, all atop an unfinished 1,837 square foot full basement.  There are 11 rooms, including five bedrooms, a family room and two fireplaces to augment the hot water furnace. Four full bathrooms and one half-bathroom join the hot tub and stainless steel sink among the home’s plumbing amenities. There is no central  air-conditioning in the facility (hard to retrofit in a hot-water building) but there are front and back stairs to separate the residents from the domestic staff.

ABOUT JULIA H. TAYLOR AND THE GREATER MILWAUKEE COMMITTEE

Julia H. Taylor became President of the Greater Milwaukee Committee in 2002 after its longtime president, Robert Milbourne, left, in the wake of complaints that he was a “one-man band” and that the group rarely met. The GMC board, which now numbers 31, wanted to change and chose Taylor, who had a reputation as a consensus leader who excelled at doing meetings. She was hired after serving for 16 years as head of the YWCA in Milwaukee, where she attracted attention for her community outreach initiatives and controversy for financial issues the group encountered. The Greater Milwaukee Committee traces its origins to the 1940s, and has long been the business community’s advocate for brick-and-mortar projects including the arena, expressway system, public museum, zoo, Performing Arts Center and Medical College of Wisconsin. Among the group’s successes since 2010, according to its website, was the “creation of an elected county comptroller.” Its next steps include cultivation “of future leadership to grow the entrepreneurial ecosystem” of Milwaukee. To that end, Taylor is leading the recently re-branded Flying Car (formerly Milwaukee Innovation Week) to “inspire minds with the year’s brightest technological advances and empower them to launch their own world-changing ideas into the marketplace.” In addition, Taylor and the GMC helped form The Water Council.

Speaking to Judith Steinnger of GM Today in 2008, Taylor noted about her neighborhood “I can walk to the bookstore and grocery. People here form close, long-lasting friendships, and my friends are from a broad spectrum. I have always found that people here are concerned about the common good.”

The GMC, with its $1,418,115 budget in 2011 devoted about a quarter of that sum, or $335,402 to Taylor’s salary. Other expenses included $240,981 in “Effective Government” initiatives, aimed toward “fiscally solvent and efficiently structured governments.” The group supports a “truly regional transit system including bus and rail transit.”

Its “Quality of Life” initiatives include a plan to “strive for efficient county governance through changes to its current finances and structure.”

So much for the public face of the GMC. However, the group also works through the dark side via the agency of Smart Government, Inc., a lobbying organization established by Foley and Lardner attorneys and headed by Taylor. Other lobbyists for Smart Government include Ray Carey and Jason Childress of Foley and Lardner, who also do work for the Koch Brothers out of their Madison office, assisted by Katie Rezin. Smart Government also hired former Republican Sen. Mary Panzer to aid the lobbying effort.

Smart Government’s 2013 legislative program thus far only includes support of AB 85 and SB 95, which are the pending measures to change the term length and slash the salary of County Board members and to cut the board’s budget.

How Milwaukee Is It? Taylor’s home is just under four miles from City Hall. 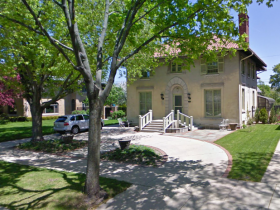 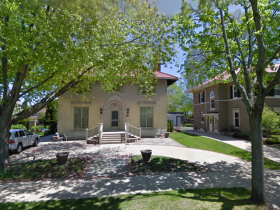 One thought on “House Confidential: Julia Taylor’s East Side Chateau”