Poverty, crime and retiree benefits all are issues for MPS, Thornton tells conference on schools.

By Edgar Mendez, Milwaukee Neighborhood News Service - Aug 9th, 2013 11:05 am
Get a daily rundown of the top stories on Urban Milwaukee 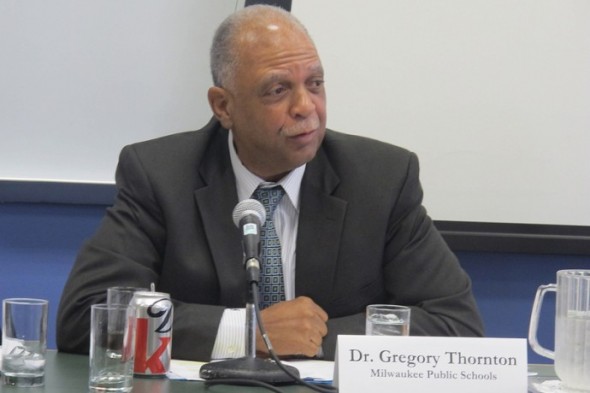 Dr. Gregory Thornton, superintendent of MPS, says he worries about students who don’t have the tools to succeed. (Photo by Edgar Mendez)

There’s no silver bullet when it comes to solving the woes of the Milwaukee Public School (MPS) system. That was the conclusion Public Policy Forum (PPF) researchers and education leaders arrived at during a recent panel discussion focusing on education reform in Milwaukee.

“Even if there were (a silver bullet), we wouldn’t be able to know it with all the overlapping reforms, governmental and fiscal,” said Anneliese Dickman, former research director for PPF, referring to changes in proficiency standards and funding cuts for education. Dickman called the long-term outlook for MPS very uncertain.

Most of the panelists agreed that the biggest challenges for MPS and for Milwaukee students in general are problems that plague the city as a whole — poverty and crime. 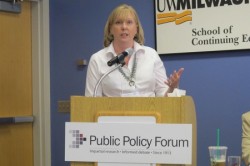 “How do you factor in violence to an education?” asked Thornton, who said MPS lost 39 students in 39 months in various incidents. He referred to several recent violent incidents in Milwaukee in which youth were shot and, in one case, killed.

Funding is another serious challenge. Dickman pointed out that there is not much room for MPS to add revenue or cut costs. MPS’s cost per pupil is more than $9,000, much of which comes from state and federal aid, according to a PPF report released earlier this year. Charter schools receive the same amount ($6,642) in state aid for each student, and spend an average of $7,670 per pupil.

But the additional spending on MPS students is not sufficient, according to Bullock. “That doesn’t make up for what these students don’t have access to at home,” he said.

Thornton added that the average spent per pupil doesn’t reflect the true cost of educating the more than 79,000 students enrolled at MPS. He said nearly 20 percent are special needs students who cost more to educate and support. Also, the cost of post-employment benefits for teachers has continued to grow, according to Thornton.

“That’s $20 million a year that could be going into schools,” he said. Thornton noted that progress is being made to change the benefit structure for teachers who retire in the future, which could help the school system.

Spector, who heads a system of charter schools in Milwaukee, said that many city students face society’s most serious problems on a daily basis. “They’re poor, homeless sometimes; I’m not sure what we do can always make a difference,” she said.

Thornton agreed that a large number of impoverished students have been ill prepared for academic success from, “the word go.”

According to 2010 U.S. Census data, 41 percent of children who reside within the Milwaukee Public Schools district lived in poverty. Data collected by the Wisconsin Department of Public Instruction showed that 81.5 percent of MPS students qualified for free or reduced lunch during the 2012-13 school year.

“The challenge is not that we don’t have great schools; some kids are getting a wonderful education,” Thornton said. However, he added that some public schools have been “dropout factories.”

“We have to come to grips with the fact that there are many low-performing schools in Milwaukee; I’ve closed 10 of them,” Thornton said.

He added that MPS graduation rates have been increasing in recent years, with 70-74 percent of students now graduating within four years. Thornton said that the public school system needs to provide young people who haven’t had a great start with support, so that they can be competitive and bridge the academic gap.

But it won’t be easy, the panelists agreed. As Bullock commented, “Teaching urban, poor students is really hard to do.”