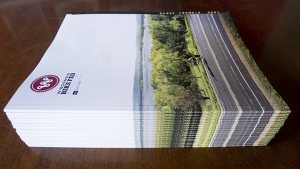 In January, 2013, the nation’s largest bicycle advocacy organization took a leap backward to the analog era and printed 6,000 copies of its inaugural issue of Wisconsin Bike Fed Magazine, a 36-page glossy.

The July issue is now out.

According to Dave Schlabowkse, the Bike Fed Interim Executive Director, known to Urban Milwaukee readers as the Bike Czar, “Based on the overwhelmingly positive response, we printed 8,000 copies of this edition, and increased the page count to 48. We were able to do so thanks to the support from our advertisers, all bike-friendly Wisconsin companies.”

Both are skilled photographers; readers know that Schlabowske is also an accomplished writer.

The magazine is an easy read, and its photographs serve as an armchair travelogue of the Dairy State.

In the current issue, Schlabowske, DiAntoni, Barry Mainwood of Midwest Bikeshare along with race impresario Tom Schuler and Julian Kegel (with his “Wheel and Sprocket genetics”) took the Midwest Hiawatha to St. Paul with the plan of bicycling 350 miles back to Milwaukee at a 100-130 mile per day clip.

They all made it back, but none of them on their bikes, due to the exigencies of fate, the weather, and their personal obligations, but it makes for an excellent travelogue. You can find it here.

The magazine is a service for members of the Bike Fed, according to Schlabowske, who writes Plenty of Horne:

We are not planning on putting the issue online yet. It is a members-only publication. We have not figured out a way to sell it on Amazon, but we plan to. We are also interested in doing a flip-book that members can access, but that also requires a subscription service.

The same issue is also the valedictory for Kevin Hardman, the executive director of the Bike Fed, who resigned July 8th 2013 to join Midwest BikeShare, where he works with Mainwood to expand Milwaukee’s bike-share program from its current pilot program outside Discovery World.

In his absence, Schlabowske has been named interim director, pending appointment of a successor, a process that is expected to take several months. Hardman leaves the organization “with stable finances and a talented staff,” according to a letter from the board of directors printed in the magazine.

In addition to print, the organization is also working to expand its online presence. This month it is rolling out rideonwisconsin.com. The improved website will allow users to “find trails, rides, events, or submit your own.”

Historic Milwaukee Wisconsin, which like the Bike Fed has a growing base of younger members and a vacancy in the executive director position, has launched a “Knock Knock” campaign to promote its Third Annual Doors Open Milwaukee, set for September 23rd-24th, 2013.

“Knock, Knock” has already appeared on the doorstep of the Urban Milwaukee Shop on N. Milwaukee St. in the form of a spray-painted graffitum on the sidewalk. Mayor Tom Barrett also does his photogenic best appearing in a “Knock Knock” T-shirt on posters promoting the event in which over 100 Milwaukee buildings open their doors for free public tours.

Historic Milwaukee has also launched the “Envisioning the Seen” series of panel discussions and has regular guided and self-guided foot tours of downtown and Milwaukee neighborhoods.

Now, the group is ready to launch a bicycle tour, and I’ve been asked to design it.

The inaugural event is styled as the “Bicycle Tour of Milwaukee Bicycle History,” and it will kick off Saturday, August 17th, 2013 at 1 p.m. The tour group, limited to 30, will meet at the bike share kiosk at the lakefront Discovery World Museum and proceed from there on a three mile or so route.

About 125 years ago or so, the bicycle craze hit Milwaukee hard. The city rapidly rose to prominence (and sometimes dominance) in the nascent sport in several ways.

The tour will go past the former site of Andrae Electric Co., where Terry Andrae convinced his father to manufacture and sell the newfangled machines. Andrae Jr. became one of the nation’s elite racers before retiring at age 24. He was instrumental in founding the American Wheelmen, a group that still exists. Andrae and the Wheelmen lobbied for decent bicycle paths in Wisconsin, among other civic and cultural improvements.

Milwaukee’s leadership role in the history of American bicycling is not limited to personnel. The city was a major manufacturer of bicycle components. C J Smith & Sons., the predecessor of A. O. Smith, produced the first hollow front fork for bicycles, an innovation borrowed from its baby carriage business. It eventually grew to become the largest supplier of bicycle parts in the world, and we will visit the site of its enterprise.

We will also roll past the former headquarters of Huseby Bicycle Company, “Mfrs. Of Wood and Aluminum Bicycles & Parts,” in a building still standing within sight of newly renamed Freshwater Way. Huseby manufactured a bamboo bicycle in the building in 1897; it could be the centerpiece of the Milwaukee Public Museum bicycle collection, if the collection is ever displayed. [See, “The Greatest Exhibit You’ve Never Seen,” my 2011 Milwaukee Magazine article.]

After a bit more wandering around Milwaukee’s perfectly flat 19th century factory zone, the tour will head to the Swingin’ Door Exchange, 225 E. Michigan St. This saloon, in the ground floor of the 1879 Chamber of Commerce Building, was once the Western Union office in Milwaukee, and was the birthplace of the bicycle messenger industry in the United States.  If you would like to join us on this tour, please RSVP here. 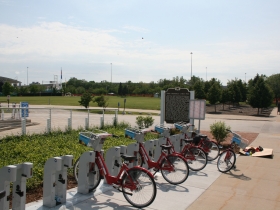 Milwaukee’s nascent Bike Share program has hit its 500th ride, partner Barry Mainwood says. The service operates out of a single kiosk at Discovery World, but is set to expand. Proposed sites include Brady Street, other downtown locations, along with the city’s colleges and universities, which might pay for them via their student segregated fees, he says.

To promote the rideshare program, Mainwood is handing out cards offering one hour of free bicycling on a shared bike. In case you don’t run into him, use promo code 201378, but don’t tell him where you got it.

Dozens of friends paid their respects to Al Culbreath, a downtown figure for many years who died last month at 90. Al was a pioneer model and charm school operator, and was one of the few African-American males to be featured in beer and department store advertisements in the late 1960’s – early 1970’s. 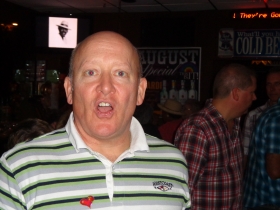 Lumber Baron Larry Krueger at the memorial party for Al Culbreath at This Is It, 418 E. Wells St. Photo by Michael Horne.

Al had a little money left over, and wanted to hold a party, said Larry Krueger, former operator of Cafe Melange, where Al worked nights after his day shift at Johnnie Walker’s, just around the corner from the club in the Hotel Wisconsin. So, Larry put it on, and decorated the place with many pictures of Al, including one of him with Johnny Mathis that was in his Journal Sentinel obituary. (It took some doing in the 1960s to be in a photo with Johnny Mathis and be the good-looking one, but Al was up to the task.)

Melange has been gone for over a decade; Krueger shuttered the place when he moved back to Valders, Wisconsin, where he manages his family’s Krueger Lumber Company, a massive hardwood enterprise.

But Larry is nothing if not devoted to his friends; and he organized the event at This Is It on Saturday, August 3rd, drawing dozens of people, including stylish women of a certain age and then some.

What Happens When Buildings Go Down?

Among the guests at the Culbreath memorial was Stella Ivory, who worked with Larry and Al at Melange, and now does the day shift at Jim’s Time Out, just across the street from the Fire Department headquarters on N. James Lovell Drive.

That tavern, which has “dive” in its genetic code, is a tiny frame structure with a half-floor attic, and will soon undergo its first remodeling in decades, having been sold to the Sabattic / Standard folks.

It is largely hidden from sight by a massive concrete parking deck just to the east. Stella says she is not looking forward to the impending demolition of the parking structure, slated to begin any day now. Why not? After all, it will bring the place some greatly needed visibility.

She says it’s because it brings back memories of the demolition of the Belmont Hotel, which came down to accommodate the expansion of the convention center back when she worked at Melange.

The demolition scattered thousands of mice downtown, she said, uprooted from their comfortable home in the Belmont, and most of them seemed to scamper toward the nearest hotel and its Cafe Melange. One customer put three mice in a cocktail glass as a trophy, she remembers. Let’s hope the parking deck was not as suitable a home for rodents as the Belmont was. But that would take some doing.

Bikes and Beer at the Urban Island Beach Party

The Third Annual Urban Island Beach Party brought thousands to Lakeshore State Park on Saturday, August 2nd for a 400-lb pig roast and other diversions. Bicyclists were treated to a ticket for a free beer, and valet parking was provided. The event, sponsored by NEWaukee, may be a model for future urban parties here and elsewhere. There was a strong element of sustainability and locally-produced goods in the mix of activities and vendors. The setting is incomparable, and thanks to this year’s abundant rainfall, the prairie restoration is considerably advanced from last year’s droughty conditions.

One thought on “Plenty of Horne: Bike Fed’s Glossy Mag a Success”