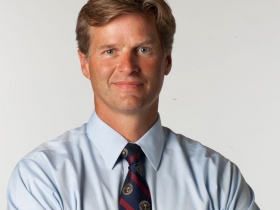 This week Milwaukee orthopedic doctor Rory Wright got his 15 minutes of fame, getting quoted in a New York Times story on the high cost of medical care. The story noted the list price of a hip implant increased nearly 300 percent from 1998 to 2011, and quoted Wright, who said the price hike had nothing to do with costs. “They price this way because they can,” he said.

Wright thus helped buttress yet another story dramatizing the high cost of medical care in the United States compared to other countries. The Times led with the incredible tale of an Indiana architectural photographer who traveled to Belgium to have hip replacement surgery because it cost $13,660, compared to the $78,000 price tag in the U.S.

The “ludicrous” cost of American medical care was recently assailed in a column by the Washington Post’s Ezra Klein offering graph after graph demonstrating how much more it cost for any kind of procedure here versus in other countries. The U.S. now devotes 18 percent of its GDP to medical care, compared to an average of 10 percent in other developed countries.

If the U.S. offers the highest-cost care on the planet, Milwaukee has long been one of this country’s most expensive cities. Just a decade ago, medical care costs here exceeded those in many other parts of the country by 20 percent, suggesting we paid more here than almost anywhere in the world.

As recently as a few years ago, a study for the Center for Studying Health System Change looked at 8 health care markets in the nation and found Milwaukee ranked second in rates private insurers paid hospitals, at an average of 205 percent of the Medicare rate, compared to 210 percent in San Francisco. The lowest was LA, paying 149 percent.

Physician payments as a percent of Medicare were by far the highest in this state — at 176 percent of Medicare payments in rural Wisconsin and 166 percent in Milwaukee — and far lower everywhere else, with Miami at the bottom, paying just 82 percent of the Medicare rate. (Had the study been done five years earlier the results would have probably been even worse for Milwaukee.)

But the most recent survey by HCTrends found that Milwaukee’s health care costs had dropped to just two percent above the national average. And the Times story noted that Orthopedic Hospital of Wisconsin, the Milwaukee facility that Wright works for, “has driven down payments for joints by more than 30 percent by resolving to use only two types of hip implants and requiring blind bids directly from the manufacturers.”

Dr. Brian Cramer, CEO for the hospital, tells me the hospital has also used this approach to lower the cost of the total knee implants it does. It has a committee of physicians who screen providers for quality and then narrow it down to two or three companies it asks to submit a bid.

“We do 500 knees and 250 hips a year and they know they will get at least 90 percent of our business if they are chosen,” he explains. So there’s an incentive to offer a good price.

It would be nice if this approach takes off in the entire metro area. Meanwhile, having Milwaukee as a national example of any kind of effort to lower medical costs is heartening, and another sign of local progress on this critical issue.

Good News For the Journal Sentinel?

But as Slate.com has noted, the deal saddled the Times with the $110 million in pension liabilities of the Globe, so the actual price tag was a negative $40 million.

As recently as April 2012, Philadelphia’s two-largest newspapers sold for just $55 million, a massive discount from the $515 million sales price in 2006. Still, that was a far more positive outcome than the Globe’s sale, suggesting the value of newspapers continues to plummet.

In that dismal context, Milwaukee’s newspaper looks like a shining star. Its value as measured by the stock market is soaring. A share of Journal Communications stock plummeted  from about $20 in February 2004 to just 49 cents in March 2009, but has since rebounded and now stands at a remarkable $8.79.  On all the key financial statistics (except debt), Morningstar ranks the company as performing above the average for its industry.

That price — and company revenue – is driven far more by the 50 radio and TV broadcasting operations it owns than by its key print publication, the Journal Sentinel.  Still, the newspaper has been doing relatively well, buoyed by all the political advertising in a state that has been ground zero for bitterly contested partisan elections.

Yes, the newspaper has been decimated by round after round of layoffs, but it has meanwhile been adding some younger, lower-paid staffers. I count about 95 reporters and editors (including 19 in sports), way down from the golden days, but still a huge contingent. And the paper has been winning countless awards for its watchdog stories.

I still don’t quite understand the paper’s emphasis on investigative reporting. If you go to the Most Popular page of JSOnline, its mostly sports, of course, but the rest tend to be straight news stories rather than watchdog reports: Walker compares himself to FDR, the mother’s testimony at the Spooner trial, 9 restaurants suspended for health reasons, Paul Ryan lays out his immigration proposals.

But you have to salute the ambition of the newspaper, which is probably doing more investigative reporting than at any time in its history. I suspect there are leaner days yet to come for the Journal Sentinel, but right now it looks in far better shape than many newspapers in America.