The artist’s scarves and other hand-made items have a contemporary beauty but also honor her family’s past. 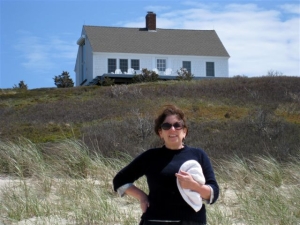 I first met Laura Goldstein in 1998 when she exhibited an eight-foot high installation of silk organza strips, an elegant-but-abstract garment for a show at the Walker’s Point Center for the Arts. The show, “Sweeping And Cleaning: Order and Chaos in Domestic Life,” focused on the role of women in daily living. Goldstein’s piece was a knockout (she still has it, albeit in storage) and curator Debra Brehmer had this to say in the exhibit’s brochure:

“Goldstein recalled the countless hours of pleasure she had as a child, reading bits and pieces of the mysterious letters the family had found in an old desk. Dating from the 1800s, the 50-some letters are a correspondence between a man and a woman, covering all topics from the personal and romantic to business dealings and conflicts….in making a work of art about these letters, Goldstein had no interest in maintaining the actual narrative or language….she instead invoked, through a highly abstracted and formal purity, the age, beauty and mystery of this correspondence.”

Goldstein has become a successful artist who lives and works in the Third Ward, where she has a studio, and her family roots are reflected, rather powerfully, in the work she does.

The first-born child (in 1956) of Diana and Leonard Goldstein, Laura lived in New Jersey until the Goldstein clan moved to the Milwaukee suburb Fox Point. Laura’s paternal grandparents, Sara and Arthur Goldstein, entered our shores via Ellis Island when they were but tender thirteen-year-old Russian kids. Arthur grew up to begin a storefront in Yonkers, New York. He bought old furniture, fixed it up and re-sold it. By the time Laura was born in 1956, it was a store featuring furniture for juveniles. 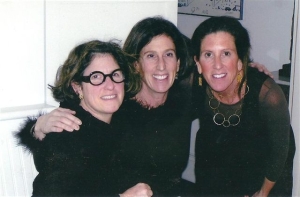 A family of strong sisters. Laura is on the left.

On her mother’s side, she says,“I had very strong role models. My grandmother, Lucile (Vogel) Grotta, graduated from Barnard. Her daughter, Rose-Joan Grotta attended Smith and had her own employment agency in New York City, and her other daughter, Diana, earned her Masters from Cardinal Stritch as a reading specialist.”

Her mother’s maiden name was Diana Grotta, whose Italian family went all the way back to the 16th century and the Blue Grotto in Capri, Italy. During a trip to New York City, Laura once stumbled upon a book in a “museum-quality” bookstore, she recalls. Perusing the text about gardens in Italy, she noticed an etching of an estate garden with a lovely garden house. Above the door, carved into the stone was one word: Grotta. 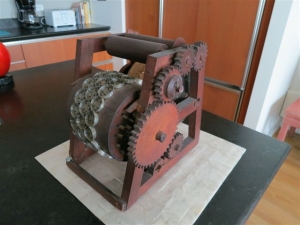 The machine that made oyster (soda) crackers.

As a child, Laura was attracted to her grandfather Joseph Grotta’s portrait photography, and his travels to Washington, D.C., where he went to auction houses and bought prototype old machines and objects. For example, a machine of dark mahogany, replete with two rollers once covered in deep purplish velvet. And its purpose? It made those tiny hexagonal “oyster” crackers, a.k.a. soda crackers. It seems her grandpa was a gadget guy.

He worked for many years for his father Jacob, who started Grotta & Company in the garment district of NYC in 1890. Among other things, the company provided the collars cuffs and scarves(decorative only) for women’s shirts. In the 1940s, Joseph Grotta, the gadget guy, came up with the concept of collars that would fit under shirts, and thus was born the wildly popular “dickey.” Two decades later, in 1960, Joseph Grotta had a massive heart attack at his Grotta & Company desk. The company closed because there was no one to take it over.

But his grand daughter Laura would eventually revive the company name. She completed high school at Nicolet, graduating in 1974 and then headed to UW-Madison to study art, specifically photography. What she really wanted to study was textiles, but that department was, and still is, associated with the School of Home Economics. She didn’t like how “Home Ec” compartmentalized women. After all, she had those strong women role models in her family.

After graduating from UW-Madison, Laura gave it about five minutes of thought before moving to Chicago to work for the Art Institute. They had one of the first “blockbuster” exhibits (Pompeii), so they put her to work in the museum’s store. Two weeks later, a senior staff member quit, and Laura got the staffer’s job. Her duties included corresponding with people all over the world about the Art Institute’s collection. 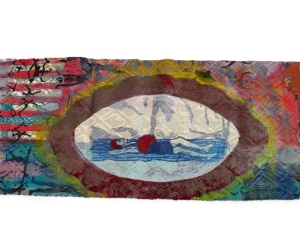 Laura eventually moved to back to Milwaukee to pursue her work as an artist and soon opened a studio on 4th St. in the Enterprise Center, in 2000. She settled on the name Grotta & Co., to honor her family tradition, and moved to the Third Ward’s Marshall Building, 207 E. Buffalo St. Barely bigger (at 100 square feet) than a small cave, it’s easy to think of it as a grotto of items both beautiful and utilitarian.

Laura has combined industry (silk screening, hand-dyeing) with artful touches on products designed primarily for the home and the women who run those homes. It’s “home economics” in a new form, though it’s not so different from the handiwork of those who produced decorative collars and cuffs for Grotta & Company, way back when. Her scarf collection has included patterns like Tulip Garden, with lovely flowers superimposed on delicate text; Paris Street Map, with images of French architecture; and one with the Milwaukee skyline. She discusses her artistry charmingly on youtube. 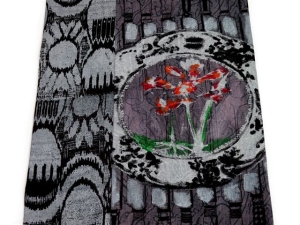 And so the world turns. When Laura bikes or walks from the E. Erie river view condo she shares with her designer husband, Carl Landgren and Lucy, a Portuguese Water Dog, she passes multiple buildings where industry once reigned in the era when her grandfather ran his shop in NYC. Today, all the that has changed, yet the spirit lives on in buildings that have been repurposed for creative artisans like Laura Goldstein.