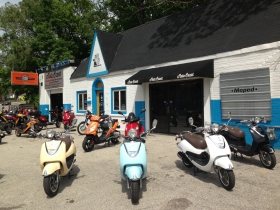 I started noticing mopeds when I was in high school and my neighbor got one.  I thought it was silly.  It was not until college that I realized the convenience and fun mopeds could offer. That’s also when I learned that what looked like a moped was often a scooter. I ended up buying a scooter. I found there are key differences.

Mopeds are more similar to bicycles and scooters are more similar to motorcycles.  Mopeds have pedals, bigger wheels, and handlebars. The motor is not as advanced as that of a scooter. For the most part, mopeds have a two-stroke engine, rather than a four-stroke engine, which means the piston moves in one forward and backward motion, compressing the fuel and then refueling. A four-stroke engine, typical of a scooter, is a bit more complicated but also lasts longer. It has a compression stroke and an exhaust stroke. Each of these strokes is followed by a return stroke.

Mopeds do not have the batteries that scooters like mine have. Almost always, mopeds are only 50cc, whereas, scooters can have 150cc. This gives scooters the potential to go much faster than mopeds.

The speed of the scooter is something I enjoy. It’s nice to be able to keep up with traffic even on a road with a 55 MPH speed limit, and to get to destinations quickly. Some may see mopeds as being slow and an obstacle to traffic, but scooters do not hinder the traffic flow.

For a college kid like myself, getting a car was out of the question. It was too expensive to purchase, maintain and fill with gas. But for around $2,000, a scooter offered me the same ride and got around 75 miles per gallon. With gas prices at about $3.50 per gallon, these vehicles are economically superior to most cars. This is a key reason scooters are enjoying strong sales both in Milwaukee and nationally.

Before the 1970s, mopeds were virtually non-existent in America. It was not until the oil embargo in the 1970s that gas prices skyrocketed and mopeds became popular in this country. Dealers sold millions of mopeds in that decade. 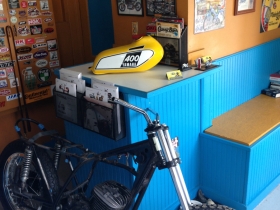 Inside Moto-Scoot. Photo by William Bott.

In the 1970s, Chinese mopeds were the most popular on America’s market. MotoFino, DongFang and many more manufacturers pumped out mopeds and scooters. The price rather than the quality was the main draw. They were the cheapest on the market, averaging around $500, but the typically of poor quality, with continual problems.

They had every kind of problem, says Andy Mauk, co-owner of Moto-Scoot, a Milwaukee scooter shop. “Everything from just valve stems to a tire breaking off or even needing full engine replacements after less than one hundred miles.”

After the poor quality caught up with these companies, most went out of business. But Chinese companies were not the only ones to go under. The poor reputation this gave mopeds hurt other companies like Puch, Motobecane, and Jawa—high quality moped companies that served European riders.

After the burst and bust of mopeds in America, scooters began to take over the market, particularly those made by Honda, Suzuki and Yamaha.  These companies made scooters that were more reliable and faster than mopeds.  This drove the popularity of scooters past that of mopeds, but scooters were still in the shadows of America’s “bigger and better” culture—which looked down on petite vehicles and celebrated large, fancy cars.

“They were considered for girls,” says Mauk.  “It was not considered manly.” But today, larger scooters are available, and the popularity of scooters in Europe has also influenced the U.S., Mauk notes.  “We are losing the stigma and people are more and more comfortable riding scooters now.” 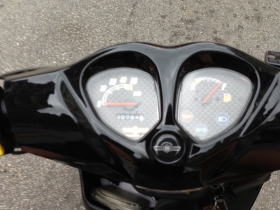 Close-up of the Genuine Roughhouse. Photo by William Bott.

On my Genuine Rough House, I can get through traffic easily, ride in the bicycle lane, make easy U-turns and get into some places that cars are not able to go.  This is not just convenient; it also makes riding fun.

Parking is also quite easy.  Instead of finding a parking spot, I can park my scooter on the sidewalk as long as it does not impede pedestrian traffic. In most states, including Wisconsin, it is legal to park a moped where a bicycle can go. The more bicycle friendly a city is, the more moped- and scooter-friendly it will be.

As with bicycles, a culture is emerging around scooters and mopeds. Two-stroke moped groups ride occasionally around Milwaukee as well as riders with three-speed mopeds. Vintage mopeds are also making a comeback. These mopeds are not the new ones created by well-known companies. They are the classic mopeds that were popular in the mid 1900s. Mopeds made by Puch, Motobecane, and Jawa, are making a comeback. 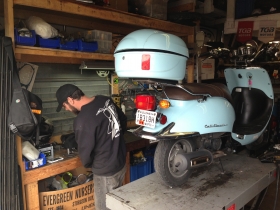 Dez Trow works on one of the scooters brought to Moto-Scoot. Photo by William Bott.

Dez Trow is moped fan who is part of the Cream City Cranks, a chapter of the Moped Army, a nation wide moped “gang” that celebrates and rides classic mopeds. Ninety percent of moped riders, he says, just see it as a way to get somewhere. But “there’s ten percent of enthusiasts who are passionate about it and it will ruin your life in the best way possible.”

The Cranks get together once a week to ride. They ride around Milwaukee on mopeds, go to rallies around other U.S. cities, and meet and trade mopeds and parts with each other. Their mopeds have rare parts and are usually assembled by the riders. 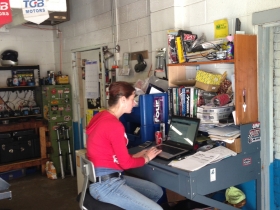 “It’s fun to do it yourself,” says Paula Heus, a Cream City Crank and an employee at Moto-Scoot. “There is a pride in that.  You are not going to really like mopeds, until you hate them first.” At first, it can seem slow and unreliable, until you begin to “really appreciate it,” she notes.

As the moped and scooter worlds start to pick up speed, that’s good news for the dealers.  Moto-Scoot hopes to sell 200 scooters this year, and is one of several scooter dealers in town. The scooter culture is growing in Milwaukee.