The Decline of Bike Crashes

The ratio of bicyclists killed by motorists is actually declining. But more safety measures could still improve the numbers.

By Dave Schlabowske, Bike Federation of Wisconsin - Aug 2nd, 2013 11:20 am
Get a daily rundown of the top stories on Urban Milwaukee

Motorist cited in crash that killed bicyclist in Sheboygan County

The Sheboygan County Sheriff’s Department cited a 55-year-old man for inattentive driving after a crash that killed a bicyclist on County Highway A in the Town of Sheboygan on Wednesday.

A release from the sheriff’s department identified the victim as Allen Redensek, 55, of Sheboygan. Read more here...

Despite all my recent reports, fatal bike crashes are really rare in Wisconsin. If you look at the statistics, riding a bike is actually incredibly safe, and keeps getting safer. The chart below shows the bicycle crash statistics for Wisconsin. Note the downward trend in the red line that shows all bicycle crashes.

This makes the 8th person riding a bicycle killed in a crash with a motor vehicle this year. Last year at this time there were six fatalities. According to most studies, more than two million people ride bikes in Wisconsin, riding hundreds of thousands of miles every year. As you can see by the blue line in the chart above, the number of people riding bicycles who are killed in crashes fluctuates a bit from year to year, but the average has remained around ten.  Certainly, even one innocent person killed is cause for concern, but since the number of people riding has gone up over the years, and the number of fatal crashes has gone down, the fatal crash rate has actually decreased.

Leading Causes of Accidental Death in the US (As compiled from data reported by the National Vital Statistics Report, Vol. 50, No. 15, September 16, 2002) 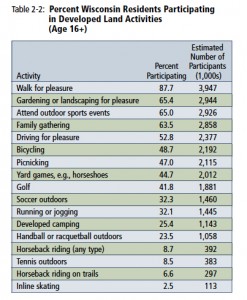 This report only counts people 16 and older, but still shows more than 2 million people ride bicycles every year in Wisconsin.

If there are only about 10 fatal crashes and 1,000 crashes annually out of the more than 2 million people who have safe and enjoyable experiences riding bicycles, why do I report about the rare instances where someone is killed? Are these reports just more fodder for fear mongers always warning people to be safe when they ride a bike?

Perhaps, but the Bike Fed staff is working to make Wisconsin an even better place to ride a bike. To us that means make it easier, more pleasant and safer. Many people still feel uncomfortable riding bicycles on roads where they have to share the road with cars. We can only make it safer if we look at the instances where crashes happen and try to implement countermeasures to reduce the chance of future crashes.

What countermeasures might we recommend to avoid future crashes at this location in Sheboygan? Given the man driving the car was cited for inattentive driving, the first thing we would suggest is more education and encouragement programs to get people to pay full attention when they are behind the wheel of a car. Far too many people use their time behind the wheel to multitask. They eat, text, talk on the phone, put on make-up, and I even have a friend who was ticketed for reading a book while driving! We need more education, more encouragement programs and stricter enforcement. 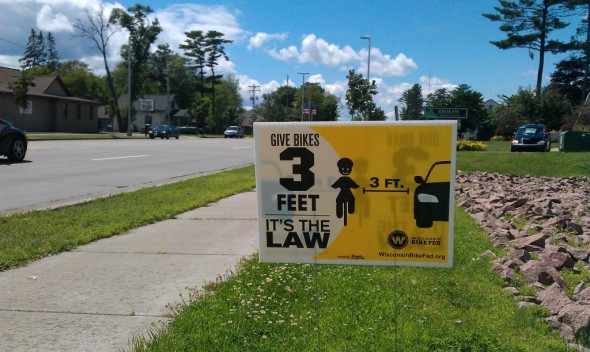 One of our Share and Be Aware yard signs encouraging people to obey the law that requires cars to pass bicycles by 3ft or more.

The other obvious component to improve safety involves engineering. The speed limit on Highway A, where this accident occurred, is posted 55 mph, and there is no paved shoulder. Best traffic engineering practices would suggest this road should have a 5 foot shoulder at a minimum to provide a reasonably safe place for people to walk, run and ride bicycles. Since there are so few cross streets, a fully separated side path would be even better and would likely result in many more people walking and bicycling along this stretch of road. 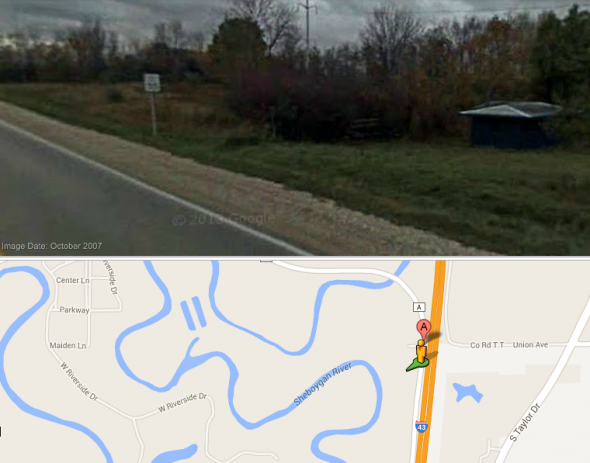 Posted 55mph and no shoulder, this Google maps image highlights a poorly engineered road. The engineers forgot to design for people walking and riding bicycles.

We want the take-away from our reports to inspire you to ride legally, be aware of where crashes happen and advocate for better education and better bicycle facilities in your communities. So please, don’t let our reports about fatal bicycle crashes scare you or keep you from riding you bike. Many statistics show riding a bicycle to be safer than walking down stairs, taking a shower and driving a car. When you factor in the health benefits and the reduced risk of obesogenic illnesses, your risk of dying goes down with every revolution you pedal.

4 thoughts on “Bike Czar: The Decline of Bike Crashes”