By Maggie Quick, Milwaukee Neighborhood News Service - Jul 30th, 2013 10:00 am
Get a daily rundown of the top stories on Urban Milwaukee 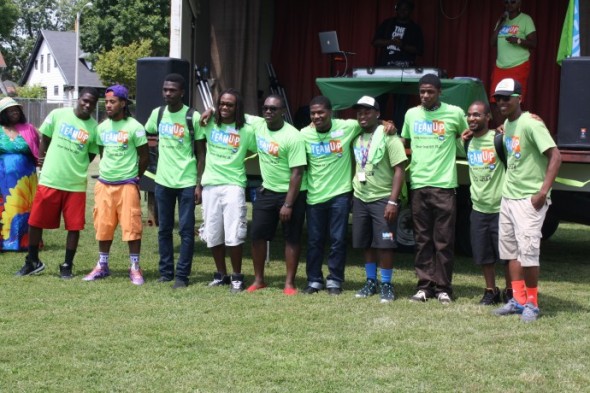 These TeamUp students will be attending Morehouse College in Atlanta, where they will each receive $25,000 a year in scholarships. (Photo by Maggie Quick)

For two years, the staff at TeamUp College Access Center helped Atiya Muhammad apply to more than 15 colleges and for numerous scholarships. Muhammad graduated in the spring from Rufus King High School, and is already pursuing women’s and gender studies at Marquette University.

“If it wasn’t for them I wouldn’t be at Marquette right now,” said Muhammad, who received all the scholarships she applied for. “I didn’t think I would have scholarships. This is a dream come true.”

Muhammad was one of about 60 students, parents and TeamUp staff members who attended the Milwaukee Public Schools’ TeamUp Senior Send-Off at Washington High School of Information Technology, 2525 N. Sherman Blvd. She was honored as TeamUp Senior of the Year for her diligence throughout the college application process.

“I think Milwaukee hasn’t been a city that has supported our college-bound students,” said Sharnissa Dunlap-Parker, MPS College Access coordinator. “We want them to know that we’re here … MPS and TeamUp want to support our seniors.” 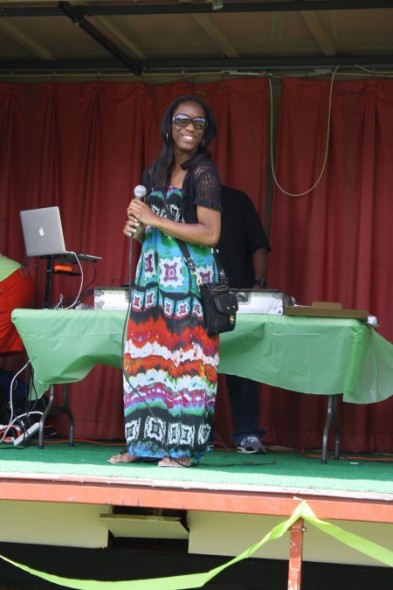 TeamUp Senior of the Year Atiya Muhammad thanks her advisors and her mother. (Photo by Maggie Quick)

Dunlap-Parker runs the two TeamUp College Access Centers, at 2730 W. Fond Du Lac Ave. and 3333 S. 27th St. The centers provide free college counseling to all public, private or charter school students who reside in Milwaukee. This year, the centers helped more than 3,500 students prepare for entrance exams, fill out financial aid forms, find scholarships and apply to schools. They served 900 high school seniors, all of whom were accepted to at least one college. Seventy-five of those seniors are receiving a combined $1.9 million in scholarships.

“They are our future,” said MPS School Board District 1 Director Mark Sain. “People say a lot of bad things happen in our community … What we see here is a testimony of the great things that go on in our community.”

TeamUp works closely with the Department of Public Instruction on in-state scholarships and with the Milwaukee Urban League, 435 W. North Ave., which has provided scholarships. Gee’s Clippers & Hair Design, a barbershop at 4323 W. Fond Du Lac Ave., also ran a “Pennies from Heaven” campaign that raised $250 for the TeamUp Senior of the Year.

Muhammad’s mother, Charlotte Muhammad, now works at TeamUp because of her daughter’s participation. “TeamUp opened up a whole realm of opportunities I didn’t know about,” she said. “It provided a lot of networking opportunities, a lot of guidance.”

Many families in central city neighborhoods don’t focus on college because they can’t afford it, Charlotte Muhammad said. “A lot of lower-income inner-city families aren’t aware of the resources there for their children.” She added the celebration is important because it demonstrates community support for the college-bound students.

“Every senior deserves this for making it to a milestone that the community doesn’t expect us to make it to sometimes,” Atiya said.

The students will be attending schools including UW-Oshkosh, UW-Stevens Point, Morehouse College, Marquette University, Concordia University Wisconsin, Milwaukee Area Technical College and UW-Whitewater. Those going to Morehouse are part of a special scholarship initiative that gives them each $25,000 a year.

“We’re really excited about them and their success,” Dunlap-Parker said.

Many TeamUp College Access Center employees are college students who used the program themselves. Shaquana Porder, one of the first students TeamUp helped go to college in 2012, is studying nursing at Concordia and is also on the outreach team for TeamUp. A major surgery her senior year set her college planning back.

“When I got out of surgery, I didn’t know what I was going to do,” Porder said. “I worked with TeamUp and within 10 months I was at Concordia.” TeamUp helped her find a scholarship that pays for 40 percent of her education.

TeamUp College Access Center South’s lead advisor, Kate Cunningham, said the organization had a smaller celebration last year and wanted to go bigger for the kids this time around. “They’ve worked so hard to get where they’re going in the fall,” Cunningham said. “It’s a really special time for them … This is our future. As a community, it’s really important to recognize our future.”

“I think it’s great,” agreed Phillip Scott, a 2012 North Division High School (1011 W. Center St.) graduate who participated in TeamUp for three years and is starting college this fall at UW-Stevens Point. “It feels good to make it to the beginning of the best [time of my life],” he said.