“The same company has been running the Milwaukee County Transit System since 1975,” says Brendan Conway, Abele’s spokesperson. “This is just the way County Executive Abele does things, he wants to see what kind of deal the county can get. It’s the same as a homeowner who needs repairs, you check to get the best deal.”

At least one county supervisor, John Weishan, questions the switch in operators. “I find it hard to believe they (MV Transportation) would provide a better service at a lower cost. Our current contractor has won awards in the past for its operation of the transit system.”

Conway says the switch in operators “wasn’t a judgement on MTS,” but the MTS recently came under fire for its mismanagement of the county paratransit contract, which cost county taxpayers $8 million, and Abele made it clear this was a factor in his decision-making. “That was not a small problem,” he says, “that was a loss of millions of dollars that didn’t need to happen and it’s the taxpayers’ money.”

The not-for profit operator would be replaced by MV Transportation, a privately held corporation based in Texas, whose website says it “provides passenger transportation management, operations, and related services to jurisdictional and private entities around the world.”

This represents a major change for the county, which would replace the non-profit Milwaukee Transit System with the for-profit MV Transportation. MV Transportation, a privately held corporation based in Texas, whose website says it “provides passenger transportation management, operations, and related services to jurisdictional and private entities around the world.”Conway, however, downplayed its significance, noting that the county has been “privatized,” out-sourcing the bus system to a non-governmental entity, since 1975. 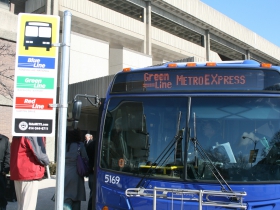 But Conway notes that “the county decides on the system’s routes and fares, etc. That’s not changing.” As for the bus drivers, they are unionized under a federal law that requires any system getting federal funding to allow collective bargaining. For this reason, Act 10, the 2011 law that ended most collective bargaining rights for governmental employees in this state, made an exception for bus drivers.

“The bus drivers have separate pension and separate health care benefits,” Conway notes, and are not treated as county employees.

However, once a new entity takes over, the contracts for all union workers would have to be renegotiated, and the new company may push for more efficiencies. Anticipating that, the bus drivers’ union, ATU 998, has been circulating a PowerPoint presentation opposing the move to a for-profit management firm.

When asked if he expected wage or benefit givebacks, Abele said “I honestly don’t know. I can tell you that was not the goal. The goal was better services and to keep fares down.”

Jackie Janz, a spokeswoman for MTS, says the bus system has more than 1,000 employees, most of whom are bus drivers, but also includes some unionized mechanics and clerical workers. All negotiate contracts with MTS rather than with the county.

Janz is among a small group (less than 100) of non-union employees in the MTS administrative office. Mike Giugno, serves as managing director of MTS and his predecessor Lloyd Grant Jr. earned $173,700. Grant recently resigned after the paratransit contract controversy arose, and Giugno, who was then the MTS deputy director, stepped up to managing director, and now earns about $156,000.

Conway cautions that the awarding of a bid is only the first step in the switch. From here, the county must negotiate a contract with the winning bidder. That leaves the possibility that the deal may fall through (and rumors had been swirling that the French company Veolia, which does work as a private contractor for the Milwaukee Metropolitan Sewerage District, was going to get the county bus contract), but Conway stressed that Abele expected to finalize a contract with MV Transportation.

In a statement released to the press on behalf of MTS, Janz said “We are disappointed in the recent decision made by the County and will continue to provide efficient and effective transportation services throughout the rest of the RFP process.” She noted that MTS had saved the taxpayers money in certain years when its operations turned out to cost less than the contracted amount.

The system today includes approximately 415 buses, traveling over 17 million miles a year. Over 300 buses are in operation during rush hour service.

Who is MV Transportation, Inc

The for-profit company began in San Francisco in 1975, with three vans providing transportation for those with disabilities under a contract with the city. Then called California MediaVan, it has since grown to become the largest American-owned, privately-held transportation firm, with executive offices in Dallas.

In June 2013, MV Transportation posted a job opening for a Transit Bus Operations Manager of a unionized fixed route/paratransit system. The application window ended July 2nd, and it seems a safe bet that the selected applicant will take over day-to-day operations of Milwaukee’s transit system.

The Future of County Transit System

MCTS faces a difficult future, regardless of who operates the system. The system is heavily reliant on state aid, which was cut ten percent in Gov. Scott Walker‘s 2012-2013 state budget. The latest state budget provided an increase in aid of four percent, still leaving a large shortfall. Milwaukee County made up the short fall over the past two years by re-allocating federal grants for the proposed Kenosha-Racine-Milwaukee commuter rail system. The federal grants, however, will expire in 2014 making future service cuts likely, unless Milwaukee County is able to persuade the federal government to grant an additional year of funding.

Despite the looming budget cuts, a number of system upgrades are in the works. A new farebox system, paid for in part by a stimulus grant, should arrive within the next calendar year, replacing an obsolete system of paper transfers that have been a source of controversy. Real-time bus location data will be made available by the end of the year, allowing a whole new suite of private applications to be developed that countdown bus arrival times. Most recently, a order of 55 new buses is arriving to replace buses that are over 10 years old (with more than 500,000 miles of service). The new buses will be part of a fleet of over 400 buses.

The Future of Milwaukee Transport Services

This non-profit company was created in partnership with Milwaukee County and does not operate in any other cities, so the loss of its contract with the county should mean MTS will fold. What happens to employees who work for the administrative office of MTS is in the hands of winning bidder MV Transportation, which could elect to hire back some employees, or employ a completely new staff.

Under the management of MTS, the system has won accolades for efficiency relative to peer systems, including the American Public Transportation Association Outstanding Achievement Award in 1987 and 1999. The non-profit recently came under fire (and ultimately triggered a highly visible bidding process) when the allocation of a paratransit contract was mismanaged due to scheduling issues, causing Milwaukee County to miss out on an estimated $8 million in savings.

Riders should not experience drastic changes as a result of the new management contract. The already-privatized system is ultimately under the control of Milwaukee County, which sets the routes, fares, and operating times.

The group most likely to experience change are the drivers, who are likely to be pushed for more efficiency under a for-profit operator. Anticipating that, the bus drivers’ union, ATU 998, has been circulating a PowerPoint presentation opposing the move to a for-profit management firm. Members of the elected ATU 998 leadership team have recently been dismissed by the national organization following emerging details on the misappropriation of funds during the Gov. Scott Walker recall.