By Bill Lueders, Wisconsin Center for Investigative Journalism - Jul 22nd, 2013 11:38 am
Get a daily rundown of the top stories on Urban Milwaukee 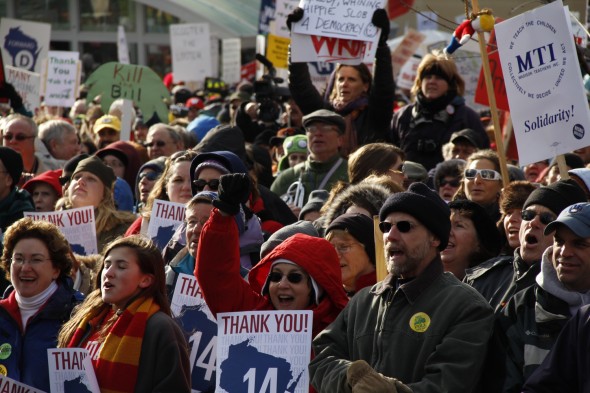 Wisconsin Gov. Scott Walker is wrapping up his contract with a politically connected law firm to help fight legal challenges over changes to collective bargaining for public employees, with payments from state coffers nearing the $1 million mark.

A recent amendment to the state’s special counsel contract with the law firm of Michael Best & Friedrich said the pact will expire “upon payment of the final invoice.” The amendment, filed with the Secretary of State’s office on July 9, gives the contract’s final total as $961,035.61.

Walker spokesman Tom Evenson said Michael Best was hired at the request of the Department of Justice and helped it handle “multiple strains of litigation” challenging the collective bargaining changes, passed into law as 2011 Act 10.

Evenson said the state has, with Michael Best’s help, prevailed in all five challenges that have been litigated to a final resolution. There are three pending cases, all brought by labor unions. One is awaiting a ruling in federal court, one is in Dane County Circuit Court, and one is now before the state Supreme Court.

The case before the Supreme Court will review a lower court ruling that struck down parts of the law as unconstitutional.

Executive Assistant Attorney General Steven Means said the Department of Justice feels it can handle the remaining cases without additional outside help.

“The total mass of the workload is getting less,” Means said. “Hopefully we’re getting to the end of the Act 10 litigation.”

Means said outside counsel could be rehired if “something unexpected were to happen.”

The decision to hire outside counsel was made in part because most Department of Justice attorneys are represented by a union, and thus are affected by the Act 10 changes. Means said the litigation has been and will continue to be handled by two nonunion assistant attorneys general.

Michael Best was originally hired by Walker on Feb. 7, 2011, four days before he announced plans to impose sweeping changes to the collective bargaining rights of public employees. The original contract was for $50,000, and set a rate of reimbursement of up to $300 per hour.

The contract has since been amended several times to increase its duration and maximum payment amount. Prior to the recent amendment, the last revision was in March 2012, when the amount was raised to $850,000. The per hour fee has not changed.

Michael Best has long been state Republicans’ go-to law firm for outside representation. The firm has  represented Republican lawmakers on legislative redistricting and has received $368,879 for legal services from Walker’s campaign, state records show.

Taffora referred a reporter to the governor’s office, saying “comments on these matters are for the client rather than for the lawyers.”

Evenson blamed the law’s opponents for the costs incurred in defending against the challenges.

“All of this effort and state expense wouldn’t have been necessary if it weren’t for the repeated attempts to overturn a law enacted by the people’s representatives and upheld in every case where we’ve had a final decision,” he said.

And while the determination was made that the state no longer needs outside legal help, Evenson said: “We are confident Act 10 will ultimately be upheld in all remaining cases.”

2 thoughts on “Walker Spent Almost $1 Million on Outside Counsel”