How an overweight corporate administrative manager transformed herself into a svelte fitness guru. 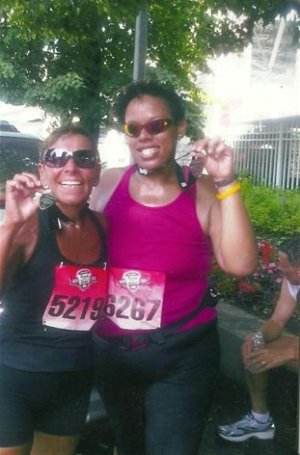 Fit as a fiddle, she arrives wearing workout clothes, which makes sense since she is a personal trainer and pretty much spends her day in spandex and running shoes. You’d never guess that Judy Solochek Jacobson was born in 1949. At 5’4”, she’s toned, tanned and trim.

Under her guidance, Tabitha Alise, lost 121 pounds in the first five months of training, and both were featured in a segment on the Channel 12 news promoting the 2011 Lakefront Marathon in which Tabitha ran. Yet Solochek spent most of her life doing office work and only became a personal trainer in the last decade.

Born in Milwaukee at St. Josephs hospital, Judith Lee Solochek checked into this world at over 8 lbs. where she joined two brothers, and was followed sixteen years later, by her sister, Cari (Kuehmichel), currently a physical therapist who runs the Alliant Physical Therapy clinic on King Drive. One of her brothers (Sheldon Solochek) is a retired general surgeon who worked at Mt. Sinai-St.Lukes Hospital, and has been active in Habitat for Humanity for many years. Her brother Marc lives in West Virginia and is an independent consultant in the coal industry.

Judy was a tomboy who played football and baseball with her older brothers and their friends, and in the summers, she always rode her bike and played baseball in The Pony Tail League in grade school. “I was captain, pitcher and clean up hitter,” she recalls. The family home was near 59th & Locust, so she attended Sherman elementary school. She walked to classes.

Her paternal grandparents were Russian Jews who who fled Russia’s pogroms in 1921, when her father, Nathan was two years old. Her mother, Shirley, came from strong Russian-Jewish stock too, though she was born in Markesan, Wisconsin. She did whatever was necessary to help make ends meet for her growing family, working at Gimbel-Schusters and Red Owl.

With a dad who was a civil engineer in structural steel design, one who helped plan the old County Stadium, the Mitchell Field airport tower, and several bridges in our city, Judith had a solid role model, who played hard too. Dozens of trophies came his way from his bowling skills. He boxed while in the military during WWII and well into his 80s, was an avid golfer.

Judy Solochek attended John Marshall High School in 1967 and was a member of the National Honor Society. She and her siblings all worked part time jobs after school, and full time during the summers. Their parents expected this. One of her early after-school jobs was in retail dyeing shoes for Bakers Shoes.

She started at UW-Madison in 1967, when the campus was rife with political activity, and soon became a diehard liberal and hippie. With thousands of other students, she marched to protest the war, and in support of civil rights. By mid-1970, all of her political heroes had been gunned down and she became disillusioned with the university system and politics. She lost her earlier direction, and not wishing to spend any more of her parents’ hard-earned cash on tuition, she dropped out later that year to take a job in the Wisconsin Center, an adult education facility on Langdon Street.

“Next came the Sterling Hall bombing,” she says. “A UW professor was killed and hard drug use on the campus had soared. Madison was no longer the place for me.”

With $400 and one suitcase, she headed to Chicago in January 1972. Within a week she had a job and was able to leave the boarding house in the Newtown neighborhood, and move to a studio apartment in Irving Park, on the lake. She rode the bus downtown to her job in the accounting department of an engineering firm. 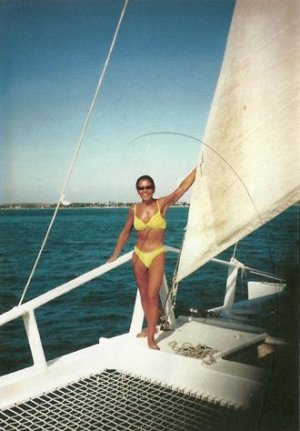 It wasn’t long before Price Waterhouse stole her away from her accounting job, and hired her as a secretary. She began to take on more and more administrative responsibilities and was promoted to administrative manager in 1984, eventually rising up to become a national director in technology support.

With a family history of heart disease and osteoporosis, she took action and started eating smarter and working out five times a week, combining cardio and strength training. She lost 30 lbs and two dress sizes in four months, and has never looked back.

In 2001, after 30 years with Price Waterhouse, and then PwC (PricewaterhouseCoopers), she was laid off, one of many reductions resulting from the merger. After 9/11, she watched as corporate giants crumbled, and thousands joined the unemployed. “There were no jobs,” she says, “so I decided to leverage my corporate training and people skills with my passion for fitness.” In effect, she recreated herself as a personal trainer. 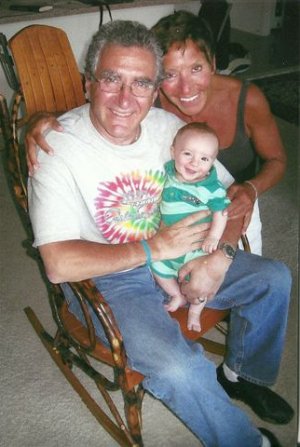 Bruce, Judy, and their grandson.

While building her new career, she met her future husband, Attorney Bruce Jacobson, a Milwaukeean. The two long-distance dated for four years until she relocated to her hometown. They were married in 2008 and live in an East Side condo.

In Milwaukee, she became a Ballys (now “Blast Fitness”) personal trainer, where she sweats six days each week. Her specialty is to assist persons with rheumatoid arthritis or osteoporosis, those suffering with back/knee/shoulder pain and the elderly. One of her clients is a 92-year-old gentleman who she’s been training three times per week for the past three years. Judy Solochek Jacobson works “solo,” or so her elegant blue-grey business card (jsolo_2000@hotmail.com) seems to indicate.

She is I.S.S.A. certified and practices what she preaches: daily exercise for 45-60 minutes (running, walking, elliptical), and healthy eating. It’s not about perfection or deprivation. she says, but more about consistent behavior and balancing eating/drinking indulgences with more activity. She rejects fad diets; suggesting the word “diet” connotes something short-term, bound to fail. If you’re wondering if she ever eats ice-cream, she does. 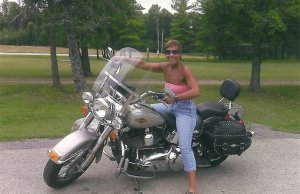 Ready to ride in the Harley parade.

And she’s a lifeline for the morbidly obese, like Tabitha Alise, who lost enough weight to enter the marathon. “Tabitha is proof that you don’t have to be on the “Biggest Loser” ranch to get dramatic results,” Solochek says. From August 29-September 1, she and Bruce will be out and about on their Heritage Softail motorcycle, parading with the thousands of other Harley-Davidson bikers in town for the company’s 110th anniversary. Odds are most of participants won’t be as trim as Judy, who will celebrate her 64th birthday in September.