The history, costs and benefits of the police department's horse patrol. 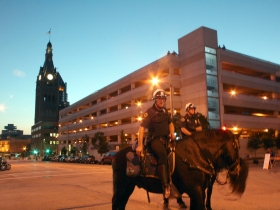 Milwaukee’s original Mounted Police Patrol began service in 1929 with four used horses from the U. S. Army Cavalry. The unit was disbanded in 1948. In 1996 two Milwaukee Police officers reassembled a horse unit, and used it at high-profile events in the city. Since March, 1999, it has been an official unit of the Milwaukee Police Department.

It is not easy to see how much the horse unit costs the city, so it may be hard to calculate its benefits. But there is little doubt that horse patrols may be the single most effective crowd-control tool available in tight urban settings, and the police clearly get some good public relations atop a horse. Units can be found at many events, including Jazz in the Park, an event so sedate the crowd could be policed by crossing guards.

The City leases nine horses from Milwaukee Coach and Carriage Co. at a cost of $11,416.67 per month. The $137,000.04 annual horse lease is funded with $12,000 in federal asset forfeitures; the remaining $125,000.04 comes from city operating funds. These sums do not include police time and equipment related to the horses like trucks and trailers. The company is owned by Grant Chromy, a banker. He decided to buy a warehouse building in 2003 and settled on this one, at 228 E. National Ave.. It came with the horses, and cost him $650,000. 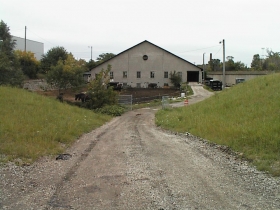 The horses have a lovely outdoor paddock with views of the downtown skyline. The 28,000 square foot horse barn, located between two elevated railroad lines, is a blast from the past in a gentrifying neighborhood. The manure produced by the horses, which consume 800 pounds of hay per day, is prized by gardeners and amateur mycologists. The barn also holds surprises, like many more police cars than you would expect to see parked there day after day.

The barn and the horses are also used by Milwaukee Coach and Carriage which operates popular equine rides in the city. 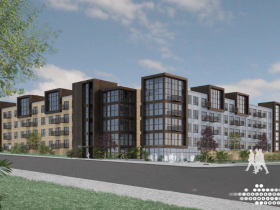 The Common Council Zoning, Neighborhoods & Development Committee approved redesigned plans for 1150 North Apartments, which is a 122-unit apartment building to be built at the northeast corner of E. North Ave. and N. Humboldt Blvd. The original design called for an advertising sign to be incorporated into the building. This sign is an existing structure, and due to the unique positioning of the outdoor advertising industry at the confluence of property and first amendment rights, developer Todd Davies was obliged to include it in his plans.

That was because sign owner Clear Channel Communications had insisted on its rights. However, Davies since negotiated a buy-out of the sign lease for an undisclosed sum, and the building will go up without this prominent disfigurement. Also approved was the 53-unit Ingram Place, which is destined to be the second-largest apartment building on N. Holton St., after the Milwaukee Housing Authority’s Holton Terrace, located at the intersection with E. Locust St.

Ingram Place will be built at the southern end of Holton, at the site of the long-closed Love Funeral Home, at the northwest corner at W. Brown St.. This property was used for a while as a church, but has otherwise remained fallow. The area to the west and south has been filling in over the years as an outgrowth of the Beerline “B” and Brewers Hills neighborhoods, and the expansion of new construction in the area is a good sign of area stability. Many blocks to the west and north of the property had numerous vacant lots, but these have largely been filled in with single family and duplex housing. To the north of the property is Pueblo Foods, a longtime Puerto Rican grocery store that has remodeled, added a very large liquor selection, and had the good sense to retain its butcher and deli departments under its new, non-Puerto Rican ownership. … Mayor Tom Barrett signed an ordinance renaming one block of W. Pittsburgh Ave. as “W. Freshwater Way.” The Water Accelerator building at 247 W. Freshwater Way is expected to open in September.

In April this year, with a grant from the American Recovery and Reinvestment Act of 2009, the Milwaukee Brewing Company erected some solar panels on the roof of its building, along with a sign announcing Milwaukee’s first solar-powered brewery. We asked owner Jim McCabe how the system is working, and if it provided him with any energy savings.

McCabe said he was expecting a modest decline in his energy bill, but discovered it to be a considerable savings. “I looked at the bill and it said I only used $500 of gas last month. That is a great decline, and considerable savings. It is summer, and the sun is high, and the days are long, so we will have to see how this plays out for the rest of the year, but I am pleased.”

McCabe uses the solar panels to pre-heat his water to 120 degrees. His savings came from only having to add about 60 degrees of heat to the water from conventional sources to get it up to brewing temperature. Meanwhile, the federal government is cutting appropriations for alternative energy projects like this one. … Milwaukee Brewing Company will be among the participants at the Milwaukee Firkin Craft Beer Festival at Cathedral Square Saturday, July 20th. The event, sponsored by the East Town Association and BrewFest Partners (Curt Foreman), has 2,500 tickets available at $45; the $79 VIP tickets are sold out. The festival runs from 4-8 p.m. (3 p.m. for the VIPs). What with Bastille Days and Firkin Fest, perhaps the East Town Association will finally scrape together enough money to improve the park that provides it with so much of its revenue.The matter has been discussed for decades. In 2011, the most recent year for which information is available, East Town events brought in revenue of $796,705, leaving a profit of $82,867 after expenses, or a rate of return better than 10 percent.