Citing lack of "information," county committee in essence reopens the process of selecting a developer for Park East Block 22. 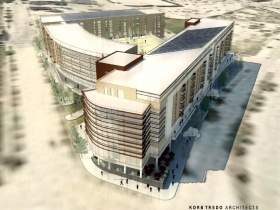 On Monday morning another development project hit a hurdle going through the never-easy land sale process with Milwaukee County.

The resolution before Milwaukee County Economic and Community Development Committee would have approved an option to purchase Block 22 in the Park East Corridor.  There were three responses to a request for proposals issued by Milwaukee County for this land and an RFP committee had eliminated two from consideration and selected the joint proposal from Opus Development Company LLC and Mercy Housing Lakefront to bring to the committee for approval. (The two companies did a joint proposal since Opus specializes in office/retail development and Mercy specializes in affordable housing, and the proposed project would combine both kinds of development.)

Teig Whaley-Smith, Milwaukee County economic development director explained that the RFP committee that reviewed the proposals was made up of Welford Sanders, executive director of Martin Luther King Economic Development Corporation, Jim Barry, president of Milwaukee-based Cassidy Turley Barry Inc., Rocky Marcoux, Commissioner, Dept. of City Development at City of Milwaukee, Gladys Manzanet, principal at !Pa’lante! Creative, and himself, and that they had determined that the other two proposals had key issues that disqualified them from being selected. Whaley-Smith added that as part of an effort to streamline the process “the Department of City Development had looked at the zoning requirements.” (In the past this would have happened after the County negotiated a land sale).

The other proposals were not officially presented during the meeting. Whaley-Smith explained that one failed to meet zoning requirements while the other requested a TIF or Tax Incremental Financing plan, and these were sufficient reasons to deny the proposals. As the meeting went on it became clear that Wangard Properties Inc. had made the proposal requesting a TIF from the City of Milwaukee. And it was reported by Sean Ryan in the Business Journal that HSI Properties LLC made the proposal that reportedly failed to meet City’s zoning requirements.

While the Opus and Mercy proposal only offers $2.5 million for the land (less than the appraised value of $3.2 million), their proposal agreed to a Residential Preferred Program requirement of 40 percent, meaning 40 percent of those working on the project would be county residents, considerably higher than the required 25 percent in the project guidelines. Additionally, the project does not require a city TIF. Tax credits will be sought to finance the project, but it was noted during the meeting that this will help the county meet its own goal that 20 percent of the units in the Park East be built as affordable housing.

The Opus and Mercy proposal includes 190 apartment units, 33,000 square feet of retail, 21,000 square feet of office space, and 340 parking spots. Jason Korb, architect for the project, described it as “a big doughnut” with parking buried in the center with the buildings “hugging all of the street edges.” The site has a 30 foot grade change so the building heights will vary from five to eight stories. A focal point restaurant is planned for the corner of Water St. and Broadway. If approved, the “goal is to have a shovel in the ground by next fall (in 2014),” said Julie Ledger, vice general manager of Opus Development, adding that for the first phase there will be a construction schedule of 18 to 24 months.

During the discussion of the proposals, Sup. Michael Mayo, Sr. fired a shot at Whaley-Smith, saying, “I prefer you to not be on the committee,” because you’re “biased,” presumably referring to the fact that Whaley-Smith works for Milwaukee County Executive Chris Abele. This exchange set the tone for the meeting. Throughout the meeting Mayo repeatedly complained of a lack of “information,” and raised the issue of not being presented the other two proposals. Sup. Steve Taylor added fuel to the fire saying, “but we haven’t even seen what the other two projects look like.”

Brian Randall, of Friebert, Finerty & St. John, appeared, with Stewart Wangard, of Wangard Partners Inc., before the committee to speak against the Opus and Mercy proposal. Randall revealed that “we are one of the other proposers” — the one looking for a TIF. He pointed out that Wangard’s proposal would pay the full appraised price and would pay $15 million more in property taxes over 30 years than the Opus/Mercy proposal. Adding to the list of reasons to support the Wangard proposal, he claimed, “we’d be able to start construction in Spring 2014,” and “we can meet a more aggressive construction schedule.”  He also stated they could prepare an alternate plan without TIF assistance, but failed to explain how this would impact their project or their projections. Addressing concerns over “reopening” the RFP, he noted that the submittal deadline had previously been changed from 2pm to 5pm on June 24th, 2013, implying this was a precedent for reopening the process again, albeit several weeks later.

Sup. James “Luigi” Schmitt stated, “I’m concerned about re-opening the RFP,” but “would reluctantly go along with a special meeting” to discuss the other proposals.

Speaking before the committee, Ken Kraemer, executive director of the Construction Labor Management Council of Southeast Wisconsin, supported moving ahead with the Opus and Mercy project and complained of the committee’s actions saying, “here we are again delaying it.” Sups. Mayo and Taylor fired back with Mayo complaining, “he’s wrong to say we want to delay the project,” and Taylor charging, “before you get up here and run your mouth…the Wangard project would start first.”

“There’s no way this is going past next Thursday,” assured Schmitt.  The committee voted 4 to 2, with Sups. Taylor and Khalif Rainey in opposition, to hold off approving the Opus and Mercy proposal until a closed session meeting, to be held on July 18th, 2013, could take place to present information about the two other proposals.

Following the meeting Stewart Wangard responded to a question from Urban Milwaukee regarding Randall’s claim that their project would start earlier than the Opus and Mercy proposal given the fact that Wangard’s Park East Square project continues to sit unbuilt just across the street from this site.  Wangard assured Urban Milwaukee that construction on Park East Square will begin “before the snow flies,” and was held up due to issues with the brownfield grant. 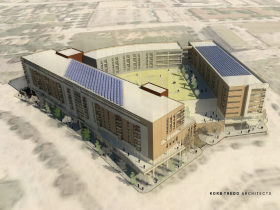 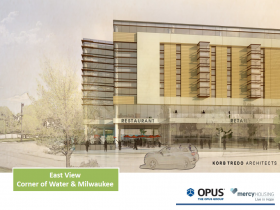 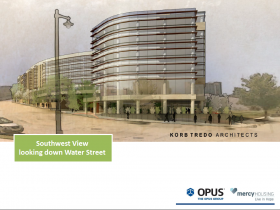 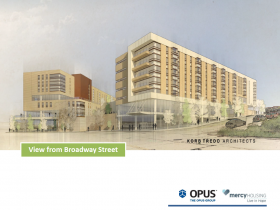 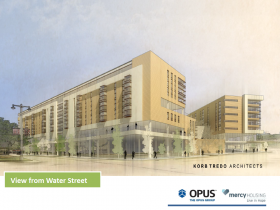 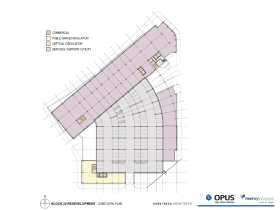 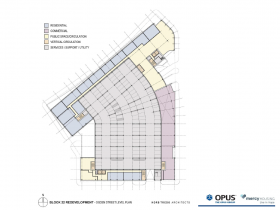 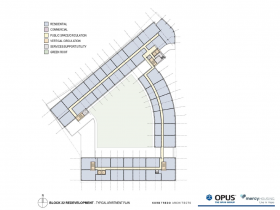 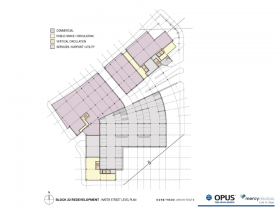