The free lance film reviewer fell in love with movies as a teen and pursued his passion.

In May of this year, Mack Bates took home two silver Milwaukee Press Club Awards: for best critical review and best single headline for Milwaukee Magazine’s online film blog, “Moviegoers.” This gave him the distinction of being the first person to win in both the professional and collegiate divisions. 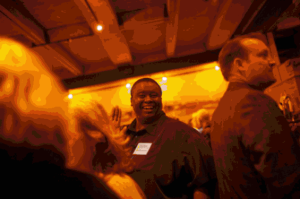 Here is a photo of him taken in the lobby of the Intercontinental Hotel, outside of the Gridiron Awards Dinner banquet room, where 18-years-ago, on May 19, 1995, he attended his Milwaukee High School of the Arts senior prom. For Bates, it was a surreal coincidence.

For the first 13 years of his life, Bates was a self-described “Air Force brat,” which isn’t to say he was a Tom Cruise Top Gun type. As the oldest of three boys whose father had 20 years service with the Air Force, he lived on three different Air Force bases in three different states. From 1980-85, his home was Wursmith A.F.B. in Oscoda, Michigan, a town with a main street appropriately named Main. The cultural event of the decade Bates says, was the grand opening of a K-Mart. That’s life in Oscoda for you. 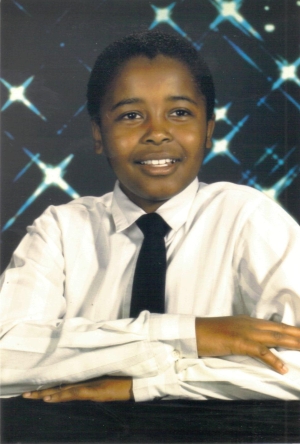 He fared somewhat better at Pease A.F.B. in Portsmouth, New Hampshire (he cautions that the city is pronounced “Port-smith”) and wow, they had three malls. And because Portsmouth was just an hour’s drive from Boston, lucky Bates got to spend quite a bit of time there. Discovering the Boy Scouts, little league and junior league baseball, while scoring top grades, he made a niche for himself, despite his earlier remedial reading classes back in Oscoda.

Little did he know, that while delivering papers for the Boston Globe, Portsmouth Herald, and later for the Portsmouth Press (in the summer of ’89, he was “Carrier of the Month” and he has the plaque to prove it), that somewhere out there over the far horizon, he’d write film reviews in a city to the west….Milwaukee.

In 1990 his father retired from the military and moved the family to Milwaukee, where a number of Bates’ relatives have resided for years. Bates the III has lived here ever since, and frankly, hasn’t strayed far from the northwest side, in the area near 76th and Good Hope Rd. Transitioning to life in Milwaukee had some rough moments. Shortly after the 1990 move, and while he was delivering papers for the Milwaukee Journal, he says he experienced his “first, unmistakable racist encounter with one of his delivery route customers, who became aggressive and called Bates a ‘nigger’ when he tried to collect money due for deliveries.

“It made me more aware of personal boundaries and what I would and would not tolerate from others,” he says.

Enter the middle school years and Mrs. Golden, his English teacher at Burroughs Middle School, who recognized his talent for writing, and at year’s end, presented him with a trophy for “Outstanding English Performance,” which looked right nice next to his paper carrier plaque. An even bigger break came when he was in 9th grade and was asked to pen film reviews for Vincent High School’s newspaper. He dimly recalls his first review was Martin Scorsese’s 1991 remake of “Cape Fear,” with Robert DeNiro, Nick Nolte, and Jessica Lange. We feel obligated to insert our opinion here, having much preferred Robert Mitchum’s slimy alligator-like performance in the earlier version of the movie.

He was only at Vincent for a year because he was advised his interest in film would fit well with the program at the Milwaukee High School of the Arts, where he went on to graduate with a major in theater in 1995. Prior to graduating, he also got to write for the now-defunct JUMP section (for teens by teens), featured in each Friday edition of the Journal.

Bates is generous with praise for those early teachers who encouraged him, but also for his writing mentors at the paper….Gary Rummler, Chris Foran and Nick Carter.

The four Milwaukee movie theaters he haunted at an early age were the Northtown Cinemas on 76th near Good Hope, Mill Road United Artist Theater near 76th and Mill Rd., the northside Budget on Good Hope and the United Artist theater at Northridge Mall — all now closed, he notes. When he reviews film, he prefers prefers the big screen format, but not necessarily at a multi-plex. He speaks fondly of the Oriental.

Bates still lives on the northwest side not far from the closed theaters. He’s single and feels no rush to settle down and have kids. For now he’s trying to find time to finish his UW-Milwaukee film and film studies degree, with a minor in journalism/mass communications. He’s quick to remind note he’s not a failed filmmaker who happens to write about film

His job as a part time Personal Care Worker pays the bills so he can spend time watching flicks.

His first love is film. “Seeing something projected larger than life on the big screen is magic,” he says.

And his favorite film of all time? “Thelma & Louise.” When he saw Susan Sarandon light up the screen in July 1991, at the old Budget theater on Good Hope, he was a green 14-year-old contemplating a career in film. Down the road he had an exclusive interview with the Oscar-winning actress that tickled his teen sensibilities. It ran in a 1999 story in of UWM’s student newspaper The Leader. And in 2007,  he interviewed another Oscar-winner, Geena Davis, also of Thelma & Louise fame. 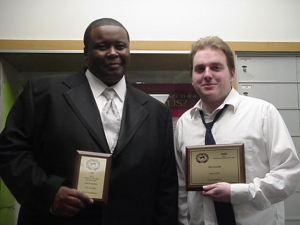 In the world of media, awards come and go, trophies lose their shine, but as any veteran of the scene will tell you, it’s often the grizzled oldsters who cheer the loudest when young writers take home prizes, remembering what it felt like to be young and fresh and full of yourself. At one such event, we heard it testily sniped, that the young and enthused would “get over it.” We hope not.

After all, just like in the movies, when the end credits roll, you’re left with an empty popcorn box and all those memories. For young persons interested in filmmaking, it’s nice to know that Milwaukee is the only city that includes a video competition in their Global Youth Service Day program. Bates was asked to judge this year’s competition, and in doing so, he happily watched ten videos produced by local kids and teens working in conjunction with schools or programs to promote volunteerism and environmental/community awareness.

Dare we exit without asking Mack Curtis Bates III which film he ranks as the absolute worst? “Jeepers Creepers 2,” he says. “That’s 100 minutes I’ll never get back.”