The Joys of Jogging?

For the first time in 15 years, I jogged to work rather than biking. It made me see how tough on the muscles it must be for first-time bikers.

By Dave Schlabowske, Bike Federation of Wisconsin - Jun 28th, 2013 10:17 am
Get a daily rundown of the top stories on Urban Milwaukee 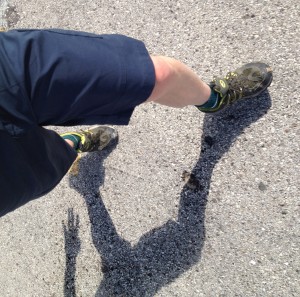 Experienced runners can probably tell by this image that I am not genetically predisposed to running. Bow legged, pronated, and flat-footed, even custom orthotic inserts can only do so much. Still, I can manage for short runs if I get my legs back in shape.

For the first time in 15 years, I did not bike to work. In a decade and a half, through hail, wind storms, lightning, and 15 inches of snow, I have managed to get to work on two wheels every day I worked at the office. Recently, I broke my streak and had to run the 4 miles from home to work.

Well, run might be stretching the truth a bit. Slow jogging might be a better way to describe what I was doing. My close friends and long time readers (not necessarily mutually exclusive groups) are familiar with my “walking is for suckers” mantra. I have been known to bike two blocks rather than walk. I have not run since high-school track, and the only reason I ran then, was to get to the pole vault pit so I could enjoy the feeling of springing up into the air. Nope, I am not a runner. 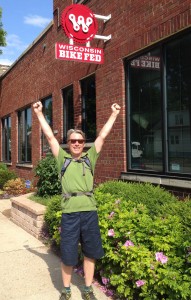 I felt like Rocky when I finally made it to the Bike Fed office.

So why did I ditch the spinning wheels for Adidas kicks? Last week I biked to work, and then had to ride a SixFifty Nekoosa that we had at our office down to leave with a photographer in the Riverwest neighborhood for a photo shoot. I took the MCTS 21 bus home, but this left me with my bike at work. So I put my laptop and lunch in a backpack, slipped on the running shoes, kissed my wife goodbye (“Why do you have a backpack on? You’re doing what?”) and put one foot in front of the other as fast as I could.

Which wasn’t too fast. It took me 32 minutes to run 3.8 miles. Not only was I slow, but it felt like I had sandbags around my ankles most of the way. I’m in reasonably good shape from riding, but apparently running uses different muscles, muscles I have been neglecting.

This gave me a really good perspective on what it must be like for people to start biking again after they gave it up. Even for fit people, hopping on a bike for the first time in years and riding 4 miles probably feels similarly unpleasant to my first run in a long time. There are no calluses to ease the butt on the new saddle and legs fit for walking or running might not quite be up to snuff for spinning circles. I could imagine many people newly returned to cycling saying “This is supposed to be more fun than driving? Forget it!” and never riding again.

Even with the unpleasant experience today, I think I will try to fit running into my short commute on a somewhat regular basis, maybe once or twice a week. I want to maintain the new-found relationship I have with these neglected leg muscles. I will also try to offer more long-term support to my friends interested in riding again. It is not good enough to give someone a push and wave as they pedal away. They might need a little encouragement to get past the awkward and uncomfortable first few trips. When I start running with the same smile I have riding my bike, I’ll know I’m there.