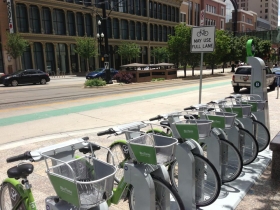 Last week I had the opportunity to attend the Congress for the New Urbanism’s 21st annual conference in Salt Lake City. If you’re not yet familiar with the work of the CNU, you may nevertheless have an excellent grasp of the principals it advocates: compact communities, walkable and attractive streets and transit-oriented development. Indeed, Milwaukee embodies many of the ideas advocated by the CNU. This is no coincidence, since the New Urbanists pride themselves on objective observation of the elements of cities that have stood the test of time, elements that were the prevailing traditional development standards throughout much of Milwaukee’s evolution. These strong principles can be seen at work not only in Milwaukee’s older, more well-preserved neighborhoods, such as the Lower East Side, but also in areas of new development, such as the North End, the expanding Third Ward, MLK Drive, and so on. It’s worth noting, and perhaps no surprise, that former Milwaukee mayor John Norquist happens to be the president and CEO of the CNU.

In addition to a number of informational sessions, ranging from finance to sketching lessons, the conference featured speeches by notable CNU founders and heavy hitters, perhaps most notably Andrés Duany, whose humorous and thought-provoking plenary speech was peppered with a mix of urbanist philosophy and calls for a more practical New Urbanism. To emphasize the importance of green infrastructure that is cheaper and easier to maintain, he quipped: “leave the heavy metals to [LEED]. Let’s be light green.” He also took a wry shot at Landscape Urbanism, which mostly focuses on green infrastructure, saying “Landscape Urbanism never achieved pedestrian activity except through Photoshop.” 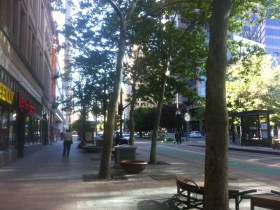 The latter quote arose from the extreme ideological chasm that separates some CNU visionaries from those in Landscape Urbanism. After the awards ceremony, Duany jokingly noted how each camp thinks the world will end: for the New Urbanists it will come by fire (global warming, rising acidity in seas, or just carbon really), which can be avoided by collecting ourselves into efficient, walkable, mixed-use developments; for the Landscape Urbanists, it will come by flood, thus the push for better rainwater management practices. Of course, neither view need be mutually exclusive and both schools in practice clearly address them as highly interrelated, but the dichotomy nevertheless has important design implications. For the Landscape Urbanists, the introduction and interweaving of green infrastructure into the fabric of the city is absolutely vital to making it sustainable and exerting a restorative effect within our “ecological sacrifice zones” (i.e., cities). For local examples, think Pabst Brewery and its gaping bioswales or the handsome green roofs that have been cropping up from Columbia St. Mary’s Hospital to the Milwaukee Public Library’s Central Library; for the New Urbanists, the overly aggressive introduction of certain green features, particularly the hard line on preserving steep slopes and riparian buffers, only serve to disperse and de-densify cities, thereby facilitating more suburban patterns of development, or worse yet, returning to the prevailing towers-in-the-park ethos of the mid-twentieth century. In Duany’s characteristically distilled way: “If I can’t build Charleston, I’m not interested.” 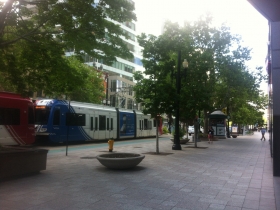 Main Street Salt Lake City with the TRAX stopped at a station. Photo by Michael Kavalar.

Highlights of the Salt Lake story were discussed at the conference and included a number of discussions on the Mormon street grid – the Plat of Zion – and its role in the development of the West. The plat is no mere historical relic, serving as the guiding spatial element in more than 700 Mormon settlements. In Duany’s words: “Brigham Young was the Henry Ford of Urbanism.”

Conveniently, the plat and its generous 132ft right-of-ways positioned Salt Lake City nicely for the reintroduction of light-rail in the last decade, as was noted in a number of sessions. The push to build that system began with protesters bearing signs reading “Streetcars kill babies” and ended with year-over-year ridership growth in the 10,000 range (also not mutually exclusive, I suppose). But I will say that the recently opened Green Line made for the smoothest transition I have ever experienced from an airport to a city. 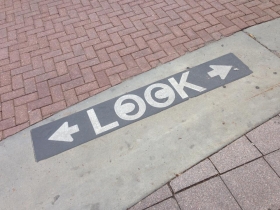 Perhaps just as transformative of my understanding of Salt Lake City were the five blocks of Main St. immediately south of Temple Square. They exude a confident, layered urbanity any big city could be proud of: quality stone pavers on sidewalks some 25-30 feet in width (another benefit of that generous right-of-way), an abundance of trees and places to sit, bike share stations, sidewalk cafés, etc. That the street and the light-rail complement each other is no coincidence, although if I had to choose I must admit I would take the street over the light-rail any day. As Jeff Speck, author of Walkable Downtowns and a co-founder and prolific contributor to the body of New Urbanist literature notes in his book, transit may complement walkability, but walkability is absolutely essential to good transit. Some cities are just lucky enough not to have to choose.

The feeling of Main Street’s improbability and splendor is only accentuated by the fact that, wandering only slightly east or west, one is immediately cast from this pedestrian oasis of Salt Lake City into a desert of…well, I really can’t quite recall. This might ring critical, but it should be read as highly optimistic. After all, a mere decade ago this street did not exist as such. It is, in short, the optimistic story of what we can make of cities – and the results might be amazing! – rather than the defeatist obsession with what we left behind half a century ago before the highway building and the drifting amnesia expanse of suburbia. The call for optimism as we look out into the coming decades, rather than resignation to our own slow demise, was echoed in some form or another throughout the speeches of Louv, Susanka, and Duany.

We spend so much time focusing on the thresholds of doom, from parts per billion of CO2 to past transit lost, that we allow ourselves to become crippled by despair and in the process relinquish a powerful transformative tool —  the belief that things can get better. For Louv this meant changing the concept of a carbon footprint to an ecological one (it’s not how much carbon we leave behind, but how much new, functioning ecology we create). It’s about improving the ascendant metropolis, not shoring up the ruins of lost ideals. It’s about the confidence of knowing that the arc of history is on our side (and it is — demographically, economically and environmentally). We may be rolling through the slip tide of an awkward, wasteful, and exuberantly destructive period in human history, but the tail of it is washing beneath us now, sliding off into the receding gloom of those years that did not seem like they’d ever end. That’s the feeling I was left with, in the after-glow of the conference. 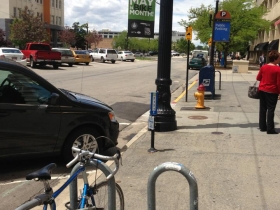 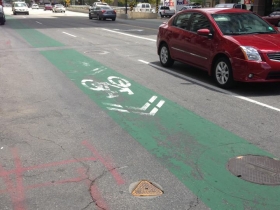 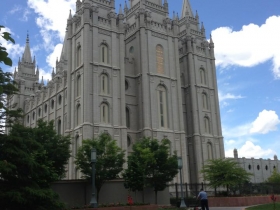 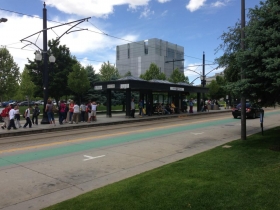 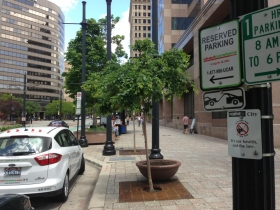