After David Koch withdrew his offer to donate to public TV, a public TV group withdrew support for documentary film about him.

By Bill Lueders, Wisconsin Center for Investigative Journalism - Jun 5th, 2013 10:53 am
Get a daily rundown of the top stories on Urban Milwaukee 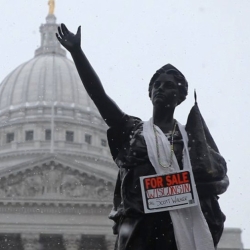 Carl Deal was thrilled to think his documentary on the role of corporate bigwigs in Wisconsin’s crackdown on public employee unions would air on public television.

“It was a really appropriate venue for how the money of a few can drown out the voices of the many,” says Deal, co-director of “Citizen Koch,” a film that critically examines the profusion of corporate cash in the political process, with an accompanying website that encourages an activist response.

But a funny thing happened on the way to the forum that public television provides. The Independent Television Service (ITVS), the arm of PBS that funds documentaries, withdrew its initial support.

That’s unleashed a whirlwind of controversy, including a recent article in The New Yorker and a skewering by the nation’s jester-in-chief, Stephen Colbert.

ITVS allegedly dropped “Citizen Koch” to avoid further aggravating billionaire industrialist David Koch, a major backer of both conservative causes and public TV. David and brother Charles Koch founded the advocacy group Americans for Prosperity, which along with the Kochs’ company is a major backer of Wisconsin Gov. Scott Walker.

David Koch has also given $23 million over the years to public television, The New Yorker reported. He served on the board of New York’s public television affiliate, WNET, to which he was planning to make, a source told the magazine, “a seven-figure donation — maybe more.”

Deal says ITVS reacted enthusiastically to a rough cut of the film, offering up to $215,000 in funding, a substantial share of its cost. But things went south after PBS last November aired another documentary, “Park Avenue,” that cast David Koch in an unflattering light. Koch ultimately quit the WNET board and spiked his planned donation, The New Yorker reported.

WNET president Neal Shapiro contacted ITVS to voice his concerns, at one point threatening to stop airing its films, which The New Yorker called “a potentially mortal blow to ITVS” because New York is its largest market. Deal and co-director Tia Lessin say ITVS officials pressured them to drop “Koch” from their film’s title and de-emphasize the brothers’ role.

In April, ITVS told the filmmakers it was no longer backing the project. Deal calls it a lesson on “the influence that private donors can have on public television.” Lessin notes that the chairman of the ITVS board is Garry Denny, director of programming for Wisconsin Public Television.

“I think the folks in Wisconsin should call him into account,” Lessin said.

ITVS spokeswoman Amna Mirza says the board played no role in the decision to end negotiations over “Citizen Koch,” but has been kept closely informed on the fallout. Amplifying on a statement from her group, she asserts that the filmmakers made “a major shift in editorial direction” from their original concept.

Deal and Lessin insist the final film is “identical in premise and execution to the written and video proposals that ITVS green-lit” last year.

Michael Harryman, spokesman for Wisconsin Public Television, says it would consider airing “Citizen Koch,” which he agrees would have audience interest because it deals with Wisconsin characters and events. (It played to packed houses at the Wisconsin Film Festival in April.)

‘“We’ve never shied away from showing anything controversial, unless we pick up on a strong sense of bias or editorialization,” Harryman says. “If they send us the film, we’ll look at it.”

Deal says the filmmakers are exploring other options for national release.

According to Harryman, state lawmakers who control about a third of WPT’s $12 million annual budget and major donors have not tried to dictate content. But ordinary viewers do sometimes vow to stop donating over something that airs.

“While we welcome feedback, we can’t allow it to dictate our programming choices,” Harryman says. “We’re stewards of the public airwaves.”

It’s an awesome responsibility that no one should take lightly.

One thought on “Did Public TV Censor Koch Film?”