By Dave Schlabowske, Bike Federation of Wisconsin - May 24th, 2013 10:17 am
Get a daily rundown of the top stories on Urban Milwaukee

The League of American Bicyclists recently released their ranking of Bicycle Friendly States, and Wisconsin fell from 6th in 2012 to 8th place this year. As recently as 2010 we were second in a neck-and-neck race with Washington for the best state in the country for bicycling. So what has caused our rapid fall from grace? More importantly, if you’re a person who loves bicycling, what can you do about it? 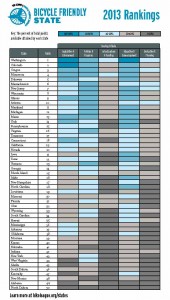 It will come as little surprise that the number one reason we have dropped in the rankings is the continued cuts to bicycle funding. Want us to go back up in the rankings? The LAB offers this as their number one tip for Wisconsin:

“Utilize all MAP-21 funding programs – including TAP, HSIP, CMAQ, STP, and Section 402 – to include biking and walking in all transportation projects.”

If you read no further and want to keep Wisconsin a great place to ride a bike, here is all you need to do:

Call or email your state representative and state senator and tell them you want to stop Wisconsin from falling behind other states as a great place to ride a bike. Ask your elected representatives in Madison to restore the federal funding for bicycling in the budget. It is that simple to be a part of the solution.

Click here to find out who your elected officials are.

Want more background information to help you be more specific and answer questions? Read on…

The 2013-2015 budget (AB 40) Governor Scott Walker submitted to the State Legislature on February 20, 2013 proposes to increase the biennial transportation budget from $5.7 billion to $6.4 billion. Despite this $700 million increase in Wisconsin’s transportation budget, the Governor’s draft budget proposes a nearly 50% reduction in investment towards Wisconsin’s bicycle infrastructure.

Beyond the impact to our national ranking, these cuts will have a very real impact on the millions of  residents and visitors who ride bicycles in Wisconsin. The cuts to bicycle funding proposed in the Governor’s budget would, if passed, pose a significant threat to the viability of Wisconsin’s bicycle industry, the state’s standing as a top-tier bicycle destination and to the mobility of the millions of Wisconsin residents who chose to travel by bicycle. Wisconsin’s bicycle industry, which includes the two largest bicycle companies in the country (Trek Bicycle Corporation and Pacific Cycles), dozens of other smaller companies that make everything from complete frame sets to spokes and saddles, nearly 200 independent bicycle dealers, and over 350 bicycle-related events and rides. Wisconsin bicycling generates an annual economic return of over $1.5 billion and nearly 14,000 jobs.

How to stop the slide: The Bike Fed proposes that the legislature amend the biennial budget for the Transportation Alternatives program to $26,403,400.

The League had some other tips to help us compete with other states that have passed us by in the last few years. If you want to add a couple other asks of the people you sent to Madison to represent your interests, we suggest you highlight these two other recommendations from the LAB this year:

Click here to read a preliminary draft of the Bike Fed’s proposed Vulnerable User Law. The Law provides for greater penalties for motorists injuring or killing vulnerable users of the road. States that already have similar laws are: Illinois (allows for Class 3 felony), Oregon, New York (A07917-C S5292-B) and Delaware.

If you need to explain the return on investment of a state trail system, read the article about it in the January edition of the Bike Fed magazine.

Nearly 50% of people in Wisconsin age 16 and older own bicycles. Imagine the impact it would have if you and the rest of those people took a couple minutes to send an email or make a phone call in support of bicycling in Wisconsin. We could easily stop the slide and keep Wisconsin a great place to ride a bike.

Click here to find out who your elected officials are.

If you care, all you have to do is call.