Landlord-tenant rights will be rewritten by this bill, and not to the benefit of tenants.

A bill in the assembly introduced at the end of last month to strengthen landlord rights is advancing along party-lines. It would provide for evictions-by-mail, loosening of notification for property deficiencies and would constrain municipalities from enacting certain landlord/tenant laws.

The Wisconsin Alliance for Tenants’ Rights calls AB 183, the “third anti-tenants’ rights law since Republicans took over the state government in 2010.”According to Colin Gillis of the alliance, “Large property management companies and organizations that represent their interests are taking advantage of a Republican-controlled state legislature to rewrite tenant-landlord law in Wisconsin, and they are hoping nobody will notice.”

Yesterday, Tuesday, May 14th, the matter was debated on the floor of the assembly and approved for its third reading as a special order of business June 6th, 2013.

The law would provide for a number of changes, including mailed eviction notices, instead of served summonses of eviction. No sheriff needed! The law would also make it easier for landlords to sell items left behind by evicted tenants, even if the item happens to be a mobile home.

One way a landlord would have “actual knowledge” of the violation is through the currently required standardized check-in sheet that all landlords must provide when a tenant commences occupancy of a premises. The bill changes that, and now only requires the landlord to provide a check-in sheet (a blank piece of paper will do) “that the tenant may use to make comments about the condition of the premises.”

The tenant then has 7 days to determine all deficiencies in the apartment and to send the check-in sheet back to the landlord. (Don’t forget to keep a copy!)

For example, if a tenant fails to note insect or rodent infestation or damage to the property within the first week of occupancy, the landlord could assume the damage to have been caused by the tenant’s “action or inaction,” allowing the landlord to charge the tenant for its remediation.

The landlord, under current law, must provide tenants with a list of deficiencies of which he has “actual knowledge.” This provision has been changed to require tenant notification only if the landlord had received “written notice of the violation from a local housing code enforcement agency.”

The bill additionally prohibits a municipality from “enacting or enforcing ordinances limiting tenant’s responsibility, or the landlord’s recovery right, for damage to or neglect of premises, or requiring landlords to communicate information not required by state or federal law, or to provide any information a municipality has about a landlord, unless required under federal or state law, or is required of all residential property owners.”

This would seem to limit the power of an alderman or other official from compiling and disseminating a list of “Dirty Dozen” landlords, for example. Such lists have been very effective in Milwaukee in the past.

The bill also provides for do-it-yourself evictions, in which no Sheriff Deputy need be present, which, inspector Edward Bailey of the Milwaukee County Sheriff’s Department said in a letter to legislators, “would not fit well with our experiences in a major urban city.”

Mayor Paul Soglin of Madison questions whether a one-size-fits-all landlord-tenant law is suitable for a state like Wisconsin, where there is a tremendous disparity in communities, their housing stock, and the percentage of mercantile apartments. Urbanized areas like Milwaukee and Madison, with a high percentage of rental housing, would suffer disproportionately, he argues.

There is also concern that the matter is being “rammed through” the legislature. It was first introduced on April 29th, 2013.

The bill is supported by the Apartment Association of South Central Wisconsin, representing the urbanized area of Madison, with a high percentage of rental housing, the Wisconsin Housing Alliance (housing manufacturers, that is) and the Wisconsin Realtors Association.

Opposition to the bill comes from the cities of Madison and Milwaukee, Dane County, Disability Rights Wisconsin, Legal Action Wisconsin, the United Council of UW Students, and the Wisconsin Coalition Against Domestic Violence.

FUN FACT: The legislature has been in a partisan frenzy to enact all sorts of legislation meddling with the powers and finances of municipal governments — and county governments, too, if the county happens to be Milwaukee.

However, you would never expect this to be the case according to the “Principles of the Republican Party of Wisconsin,” (which I didn’t know they had, given how the GOP has been behaving lately.)

But, since the government closest to the people in Milwaukee and Madison happens to be filled with Democrats, the government furthest from the people, controlled by Republicans, will have to do. 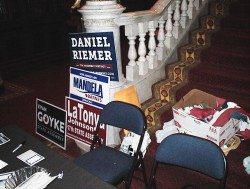 Campaign signs from the area’s Four Freshmen are behind the welcome table at the Assembly Democratic Campaign Committee fundraiser “Pabst, Present and Future,” held at the Pabst Theater, Friday, May 10th, 2013. Photo by Michael Horne

The Wisconsin Assembly Democratic Campaign Committee has a simple mission: “to help elect Democrats to the assembly.” It is also a vehicle for political supporters to pump money into campaigns beyond the contribution limits set for individual candidates. Similar entities exist in the Senate; Democrats and Republicans both play this game.  The group held an event Friday, May 10th, 2013 at Cudahy’s Irish Pub in the Pabst Theater to meet the four freshmen assembly Democrat representatives from Milwaukee:  Evan Goyke [18th], Daniel Riemer [7th] Mandela Barnes [11th] and LaTonya Johnson, [17th].

There were speeches, including from Chet Gerlach, a former assemblyman who now lobbies and runs bicycle tours in Door County.  He was followed on the podium by others, including Rep. Gwen Moore, who has been doing her duty raising funds for fellow Democrats this season. 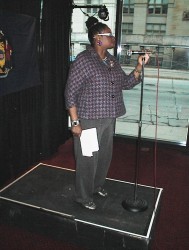 The City Hall scaffold provides a lasting background for Rep. Gwen Moore, as she exhorts the Assembly Democrats. Photo by Michael Horne.

The legislators had their say, with the principal speech being given by Goyke, who said that the statewide freshman class has “got people who beat incumbents,” despite “the worst gerrymandering” of any legislature in the nation, rivaling that of North Carolina, also “at the top of the food chain.” He supported this by saying that 200,000 more people voted for assembly Democrats than for Republicans, yet they are far from controlling the assembly.

What to do? “We have to work block-by-block, precinct-by-precinct, door-by-door” in the upcoming election cycle, he said. Among the attendees were David Riemer, who lost a race for County Executive to Scott Walker, there to support his son Daniel, former Sen. Gary Goyke, providing similar services for his son Evan, and former Sen. Barb Notestein, out for the evening. Milwaukee aldermen Bob Bauman and Nik Kovac were also in attendance, as were former Rep. (U.S.) and current Rep. (WI) Peter Barca, joined by colleague Jon Richards. Dr. Robert Starchak was also there.

TRAIN DAY IGNORED BY WISDOT – Does Gov. Scott Walker have his fingers in everything? 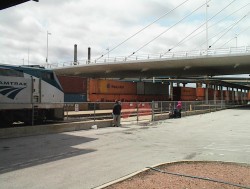 A freight train, Chicago bound, passes the Amtrak Hiawatha outside the Milwaukee Intermodal station. This was the highlight of Train Day, 2013. [Note spectators.] Photo by Michael Horne.

Saturday, May 11th, 2013 was National Train Day, even in Milwaukee. The event was held at the Milwaukee Intermodal Station downtown, and drew such exhibitors as Lionel Club of Milwaukee, Kalmbach Publishing, Operation Lifesaver, Wisconsin Chapter of the National Railway Historical Society, Talgo Inc., Amtrak and more.The highlight of the event, regrettably, was watching Amtrak and CP freight trains pass through the station, which made for a sight. There were no historic (or futuristic) trainsets on the sidings, as in past events, or as in other, more progressive cities.Absent from the event, unlike during similar Train Days during the administration of Republican Gov. Tommy Thompson, was any presence of the Wisconsin Department of Transportation. Apparently the Scott Walker administration’s anti-passenger rail policies extend to the absurd level of denying that the state has real responsibilities in rail — whether passenger or freight. For example, WisDOT owns the intermodal station, and you’d figure somebodywould show up to represent the landlord. 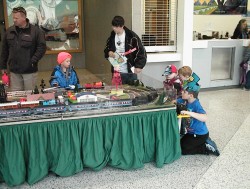 Children are propagandized into accepting passenger rail as a legitimate transportation option during Train Day, held in a government-owned building. Where is the outrage? Photo by Michael Horne.

There were some delightful moments — children playing conductor on model trains, for example. But nothing was more precious than the presence of the folks from Talgo, proud of the trains they manufactured in this city, and abashed that there are two complete sets sitting in a warehouse that Walker refuses to accept for his shortsighted ideological reasons. All aboard!

I will be giving my monthly speech this evening, Wednesday, May 15th, at 6:30 p.m. at Shakers, 422 S. 2nd Street. I plan to discuss swindlers, big and small, public and private, in this city during (mostly) the 19th century. There is an abundance of material, starting from the very first days of settlement.

And as part of Bike To Work Week 2013, Vulture Space, the Community Bicycle Project, has arranged a number of events in town. I will be part of the Antique and Vintage Bicycle Show, which is free to the public Thursday, May 16th, from 4 – 8 p.m. at the Milwaukee Public Museum.

The Milwaukee Wheelmen and South Shore Cyclery will be bringing in a collection of antique bicycles, while the Bicycle Federation of Wisconsin and others will have displays at the event. Around 6 p.m. I will deliver a brief address on the history of bicycling in Milwaukee. The speech is based on new research at the Public Library and elsewhere, and will be augmented with other previously published material. I look forward to seeing you there!