Mayor Barrett kicked off Bike to Work Week with his annual bike ride, and announced new city funding for bike-sharing.

Mayor Tom Barrett kicked off the 2013 Bike To Work Week with his annual group bicycle ride.  The ride started at N. 51st St. and Washington Blvd., near his home, and finished downtown at the Zeidler Municipal Building. Barrett was riding a Trek B-Cycle bike-sharing bicycle, forshadowing the announcement to be made later in the morning.  A number of bicycle advocates, politicians, residents, and city staffers were spotted along the way, including Barry Mainwood, Midwest BikeShare Inc., Alds. Nik Kovac and Jose Perez, city staffers Jeff Polenske, Jeff Fleming, Bunky Miller and the City of Milwaukee’s new Bicycle and Pedestrian Coordinator Kristin Bennett. Also on hand from the Bicycle and Pedestrian Task Force were Pat Murphy and Keith Holt, while representing the Bike Federation of Wisconsin were Kevin Hardman, and Dave Schlabowske.

The ride itself was quick and easy (mostly downhill) and uneventful, though seeing Milwaukee Police Department bicycle officers “corking” interesections was enjoyable for this bicyclist. But it wasn’t until the group made it to the Municipal Building that Mayor Barrett broke the big news of the day.  The City of Milwaukee is committing $288,000 to a new bike-sharing system, with much of these funds coming from existing Tax Increment Districts including the recently created TID for Northwestern Mutual’s new headquarters. The non-profit Midwest BikeShare Inc. has been working to raise $1.6 million to launch a system that will have 250 bikes at 25 locations in and around downtown Milwaukee, so with today’s announcement the group is more than half-way to its goal. 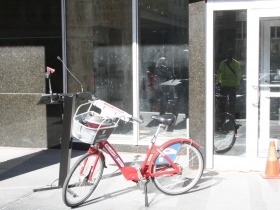 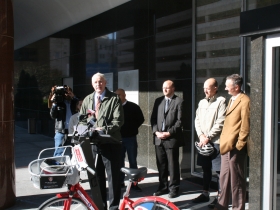 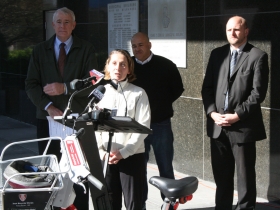 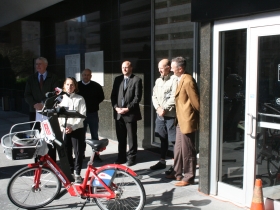 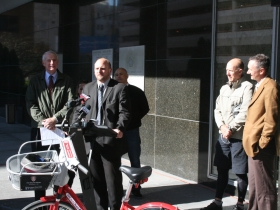 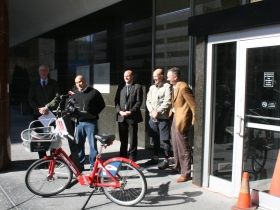 One thought on “Photo Gallery: Mayor Barrett Bikes to Work!”