Countless changes on the lower East Side, the end of an art gallery, and the pols gather for Willie Hines' fundraiser.

Well, this wouldn’t be much of a city without buildings, would it? The mere thought is too silly to contemplate. But the city evolves, and projects big and small continue apace. On the Lower East side there is ample evidence that a few catalytic projects have encouraged rehabilitation of nearby buildings. A good example can be found in the 1500 block of N. Jefferson St. This short block, between E. Lyon and E. Pleasant streets, is near the Park East freeway corridor, where the Milwaukee School of Engineering athletic field / parking structure, designed by Uihlein Wilson Architects, is under construction. The college calls the structure “an important catalyst for additional development in the Park East area.” The 1500 block of N. Jefferson St. is also a block away from The North End, “a neighborhood by design” brought to us by the Mandel Group, and is within orbs of the Blackwatch ’68 Properties building under construction at 1530 N. Jackson St., a five-story building at 1601 N. Jackson St. (which is now at its full height), and is just uphill from the Pleasant Street bridge, now under reconstruction. 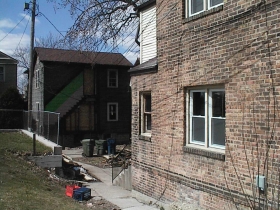 These large projects naturally attract attention and provide confidence in a neighborhood that draws investors. Take, for example, the two buildings at 1508 N. Jefferson St. These structures, front and rear, are modest frame dwellings that each have two living units, sitting on a 30′ x 120′ lot. They were assessed at $220,700, including $39,600 for the land.

However, an outfit called ECO Management, LLC. purchased the property for $50,000 on February 20th, 2013, and took out permits to rehabilitate the buildings over the last couple of weeks. New windows are being fitted, plumbing and electrical improvements are being made, and an old exterior staircase has been ripped off the rear of the front building. With these improvements in place, the property will likely command rents commensurate with its assessment. The low purchase price will certainly help the owner, Timothy J. Olson, who has apparently emerged from a $41 million bankruptcy, afford these improvements, and thus we see a happy sign of confidence in an old neighborhood, and two aging buildings brought back to life.

The property is just across the alley from 1509 N. Jackson St., a vacant lot that has been improved with a number of geothermal wells and awaits development. Just up the street, at 1601 N. Jackson St., the Avante Apartments, a five-story, 35-unit elevator building has been fully framed out, and workers are proceeding with the finishes. It is scheduled to open in July, 2013. Across the street, at 1606 N. Jackson St., a minor but telltale sign of progress can be seen. Where there had heretofore only been one gas meter outside the 1,500 square foot 1900 cottage, there are now two meters, and a fresh patch of concrete leading to the main. This would tend to indicate the owner plans to convert the former single-family dwelling on its narrow 22′ lot into a duplex — another small, but significant project.

Not far away, at 1845 N. Humboldt Ave., a formerly derelict 3-family building set back on its lot just north of Scaffidi’s Hideout is being converted into a four family. A slab for parking two cars was laid last week. On N. Astor St., just south of E. Brady St., restaurateurs Scott Johnson and Leslie Montemurro finally decided what to do with a gravel parking lot outside their side-by-side homes. It is now paved.

Where will the next infill projects happen in urban Milwaukee? One good place to look would be on E. Kane Place, just east of N. Humboldt Ave., where Kane Commons was built in 2009-2010. This “urban courtyard development” consists of a combination of rehabilitated older buildings and new, green construction. In the past two weeks three of these homes were sold, and are now being built out to the new owners’ specifications. All that remains for sale are three smaller rehabilitated condo units in a historic building, and one buildable lot on the street. The success of Kane Commons will likely lead to more investor confidence in the existing housing stock on the street, and it would be reasonable to assume that smaller projects similar to those on N. Jefferson and N. Jackson streets will soon be underway. 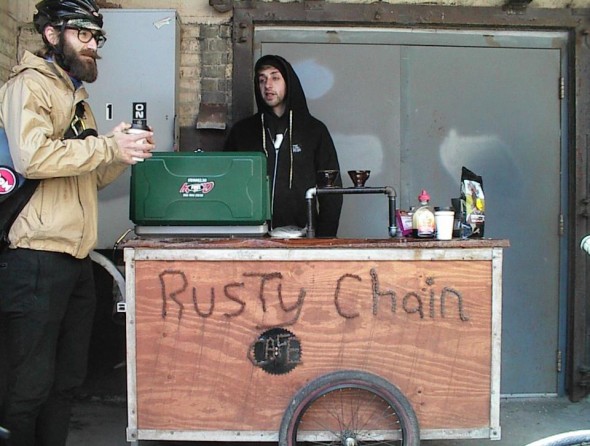 After 8-1/2 years in the Marshall Building, 207 E. Buffalo St., Grava Gallery will close on April 30th, 2013. Owner Michael Wavra will pack up his mat cutter, clear out the shop and retire, he says. Grava Gallery was located in the Brady Street neighborhood for 16 years before Wavra moved to the Historic Third Ward, where he maintained his reputation as one of the city’s best framers. His gallery always included small shows of artworks, impeccably matted and framed. An additional bonus for visitors to the lobby space was being able to look at works of art awaiting pick-up by the owners who had brought them in to be framed. These works ranged from old masters to Bucks jerseys. Grava and his longtime partner Tim Kraetsch will retire to their E. Irving Place home, “and you will still find us at Jamo’s,” he said last Friday while the couple enjoyed their usual Fish Fry at the Swingin’ Door Exchange. “We will still make it down to the Door, and are going to try Steak Night, [Saturdays] as well,” he said. … Speaking of the  Swingin’ Door Exchange, the venerable saloon in the historic 1879 Chamber of Commerce building celebrated it 80th anniversary on Monday, April 22nd 2013. A photo on the wall of the tavern shows the place in 1933, at the end of prohibition, when beer had just become available again. Interestingly, the tavern looks well-worn even at that early date. Perhaps the Swingin’ Door is even older than the official record … Add another bicycle-powered business to our city’s list. The Rusty Chain Cafe is “Milwaukee’s first bicycle-powered mobile coffee shop.” It was built and is operated by Cohl Wiesbrook-Peterik, who works at Bel Air Cantina. The sturdy top of the wagon is built from boards salvaged from his parents’ barn, he said. Wiesbrook plans to set up his coffee shop  on the East Side and Riverwest during the many events in the community. The cart, with its name spelled out in (appropriately) old rusty bicycle chains, has also been a fixture at the Holton Marsupial Bridge Media Garden and will be a regular at the Skyline Music series at Riverwest’s Kadish Park, where a new bandshell and site improvements will be in place this season for the annual Tuesday evening outdoor concert series sponsored by COA Youth & Family Centers. The Selig-Joseph-Folz Amphitheater dedication will be held on July 9th, 2013, and will kick off the season. … Most recently, Rusty Chain was at the starting line of the Milwaukee Messenger Invitational XII, Milwaukee’s premier alleycat race that brought about 100 bikers to Milwaukee, many from Minneapolis and Chicago on 4/20. … Eric Kremin, the longtime bicycle mechanic at Ben’s Cycle and star player of the Milwaukee Bicycle Polo Club‘s world champion Beaver Boys is moving to San Francisco, where he will join fellow former-Beaver Boy Brian Dillman, who moved there last year. Kremin and Dillman were among the 11 bicycle polo players arrested and held for 11 hours in jail in January 2010 for playing polo in the O’Donnell Parking Garage. They were given tickets for trespassing.

Midwest Environmental Advocates held a “pre-Earth Day” celebration at the Clock Shadow Building, 538 S. 2nd St. on Thursday, April 18th. Attendees toured the $7 million green building built by Fix Development and designed by Continuum Architects, where one of the nation’s few urban cheese factories is located. The structure was announced Tuesday, April 23rd as one of the top ten green buildings of 2012 by the American Institute of Architects. At the event, Dennis Grzezinski, the group’s senior staff attorney chatted with Plenty of Horne about current issues, among them the proposed iron mine in Northern Wisconsin. He wondered why state law needed to be changed in order for the mine to be built — something never adequately addressed by mine proponents. He also agreed that it is the region’s abundance of water, rather than its relatively low-grade taconite deposits that makes it economically appealing. Another concern is the likelihood that the mine, if constructed, might never be restored to its original condition, as promised. Uranium mines in Colorado, for example, have been defunct for years since the end of the Cold War, when demand plummeted. However, mine owners have been able to use legal strategems — like re-opening the mines briefly every few years — to avoid being classified as “closed,” and therefore in need of restoration. Do I see that day coming in Wisconsin? Assuredly, yes, if this mine is built… This week, the Milwaukee Brewing Company, 633 S. 2nd St., just down the block and across the street from Clock Shadow, hopes to run all week solely on biodiesel, using no commercial gas, in honor of Earth Day. The brewery’s solar panels, in place for a week, “are soaking up rays,” according to owner Jim McCabe, and might really put out some power once the sun does its part after the world’s most miserable spring.

NAMES IN THE NEWS

Common Council President Willie Hines held a fundraiser Wednesday, April 17th, 2013 at the Milwaukee Public Market where he was joined by colleagues including Alds. Bob Bauman, Michael Murphy and Tony Zielinski. His former aide, Alex Runner, was in the audience of supporters, as was retired Municipal Court judge Jim Gramling, who climbed metaphorical and literal mountains in his career, and Chris Moews, the announced opponent of Sheriff David Clarke.  Jim Kaminski, the former head of the Department of Public Works re-emerged from his recent political obscurity, while Ricardo Diaz, former head of the city’s Department of City Development, made his appearance. Joanne Anton was there after a long career serving former Sen. Herb Kohl, who was not. Spencer Coggs, the City Treasurer, supported the man whose office is a floor above his. Also enlivening the proceedings were Keith Stanley, Moira Fitzgerald, Wallace White, Joel Haubrich, along with James Madlom and H. Carl Mueller of Mueller Communications. When asked if he likes House Confidential in Urban Milwaukee, Mueller was quick to say, “no!” But Madlom diplomatically pointed out that he felt “the Sue Black one was fun.” Mixed verdict. We’ll let them sort that out back at the office.

3 thoughts on “Plenty of Horne: The Ever-Changing City”