With 50 TVs and a Charles Barkley pig, it’s all sports all the time. 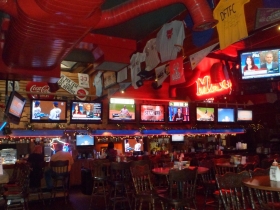 Longtime waitress Angie St. Ledger vividly remembers the time NBA hall of famer Charles Barkley came to Major Goolsby’s: “When he came in, he made all the grown-ups clear out of the area around him so that he could sign autographs for the kids,” she recalls. “He signed for every single one, and then there were like 30 other people around him and he bought all of them drinks.” Yes, she adds, he was a good tipper.

Barkley is among a long list of athletes and celebrities who have hung out at Major Goolsby’s since owner Jerry Cohen took over the building in 1972 and birthed one of Milwaukee’s most iconic sports bars. Prior to this, the establishment was called Time Out, a steakhouse-type restaurant owned by legendary Marquette basketball coach Al McGuire. Because the bar was across from the Milwaukee Arena, “Jerry wanted people to have a quick experience so they could get out to the game,” says assistant manager Marty Petricca. “Back then, the (arena) didn’t really serve much for food. He had the idea and this spot happened to be available.”

Major Goolsby’s spot at 340 W. Kilbourn Ave. is just down the street from U.S. Cellular Arena (formerly the Milwaukee Arena and for many years the home of the Milwaukee Bucks) and a block away from the BMO Harris Bradley Center. Due to its location, many of the bar and restaurant’s patrons are fans visiting either before or after an event at one of the nearby arenas. By the mid-1970s, Major Goolsby’s was so busy that an expansion was necessary. The kitchen and cavernous main dining area were added on to the original section, which now houses a bar, a small seating area, the bathrooms and a life-size Major Goolsby riding a motorcycle.

Who exactly is Major Goolsby? “The owner’s never really told anyone how or why he came up with the name,” Petricca says. But he’s willing to speculate. “Major Goolsby is a post-Civil War character,” he says. And a story has arisen, he adds, “that the guy was just a bumbling drunk and, on his deathbed, had a bunch of empty liquor bottles surrounding him.” Cohen did serve time in the army and might have heard stories about such a major, Petricca muses. Or maybe it’s all made up. 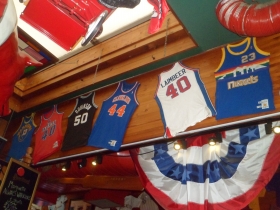 But the bar is real enough. Every inch of the walls and ceiling are covered in jerseys, photos, pennants and other random items from sports of all kinds. One jersey is that of Robin Yount, one of the Milwaukee Brewers’ most beloved players. “He was great,” St. Ledger recalls. “He made me feel like I was his best friend.” Yount visited Major Goolsby’s during his brief stint as the team’s bench coach in 2006. St. Ledger recalled seeing a Yount jersey somewhere around Goolsby’s, so she found it and asked Yount if he would sign it, which he was happy to do.

Then there’s the large red-and-white pig that hangs from the ceiling, just above the entrance. St. Ledger says the pig is actually a bank and was purchased by Cohen through an auction in conjunction with Farm Aid. Interestingly, Charles Barkley was also involved in the event, so Major Goolsby’s asked if they could name the pig Barkley. He agreed, and now the pig sports his number 34. 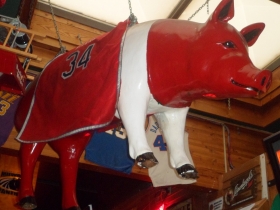 Major Goolsby’s actually put the piggy bank to use in 1996 when Green Bay Packer Reggie White’s church in Tennessee was burned down by arsonists. St. Ledger says the bar put the bank at the entrance so customers could donate to rebuilding the church. Cohen then matched that amount and Major Goolsby’s presented White with the money when he was speaking at an event in Milwaukee.

Other sports stars to visit Goolsby’s include Packer Gilbert Brown, baseball’s Reggie Jackson, NBA player Manute Bol and golfer John Daly. When the Brewers were in the 2011 playoffs, Petricca says a number of sportswriters flocked to Major Goolsby’s. Celebrity visitors include “MacGyver” TV show star Richard Dean Anderson and “Beverly Hills 90210” heartthrob Jason Priestley, who flew in for an event at Major Goolsby’s. St. Ledger remembers that one lucky lady won a limo ride with Priestley.

There was even a fight involving a celebrity at Goolsby’s. In an interview with the Milwaukee Journal in 1976, longtime sports broadcaster Pat Summerall recalled the incident: “Some guy kept bothering me and I wound up choking him.”

Goolsby’s has of course seen its fair share of Milwaukee Bucks players over the years, including current players Monta Ellis and Brandon Jennings. The bar often provides pre- and post-game meals to both the home and visiting players. On a recent Thursday afternoon, Bucks rookie John Henson saved a locker room attendant a trip and stopped in to pick up his order. Petricca says all the talk surrounding the Bucks’ future in Milwaukee and replacing the Bradley Center with an updated arena, is important to Major Goolsby’s future.“Obviously, if the team leaves or (a new arena) is built farther away, we’ll most likely lose some business,” he says.

However, Petricca says Major Goolsby’s is about more than the Bucks, as the bar caters to fans of all sports and teams. That’s pretty easy to do considering the number of televisions Goolsby’s has. When Petricca started working there 13 years ago, he says there were twenty. Today, there are 50 TVs covering every available inch of the bar not devoted to sports memorabilia. “On football Sundays we can have every game on and there’s usually someone here for each team,” Petricca says. Although not many sporting events in Wisconsin can rival Packer football, Petricca says the NCAA basketball tournament certainly gives football a run for its money, especially when Marquette is doing well. Marquette’s 2003 trip to the Final Four was Petricca’s favorite time. “The aisles were filled with people,” he says. “A line ran out the door and down the block. It was just sheer excitement.” 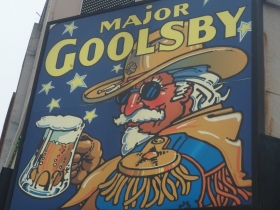 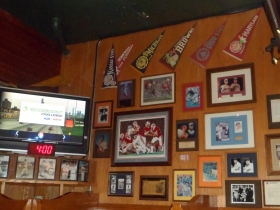 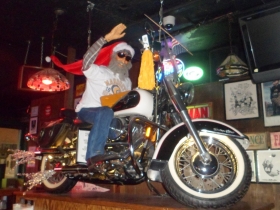