A squad car patrols a high crime neighborhood and turns up a violator. How it works. Part III of a series.

By Mark Doremus, Milwaukee Neighborhood News Service - Apr 10th, 2013 10:46 am
Get a daily rundown of the top stories on Urban Milwaukee

It’s a chilly Friday evening in early April on the north side of Milwaukee – the poor, largely African-American part of town. It’s chilly, but not really cold.

We’re riding in a black-and-white squad with officers Matt Gadzalinski and Mike Miller, who work out of the old District Three police station on 47th and Vliet Streets. They’re part of the police department’s “Neighborhood Task Force,” a specialized unit that targets law breaking in areas identified as high-crime “hot spots” by computerized police data.

The object of the game is to put officers in the right place, at the right time, to intercept lawbreakers, maintain order and deter criminal activity where it’s most likely to occur. The method uses so-called “pretext stops” (in Chief Ed Flynn’s words) of vehicles for minor violations, and interviews of individuals on the street.

The shift starts with roll call at 4:40 p.m. During the afternoon and evening, the two officers will have an almost non-stop series of encounters with civilians, mostly uneventful, but all of which allow them to assert police authority in an area known for violent crime. 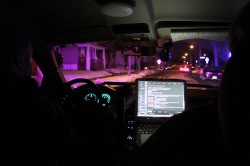 Cruising the north side. Photo by Mark Doremus.

These officers aren’t looking to write up traffic tickets or municipal ordinance violations like spitting on the sidewalk. They’re looking for actionable intelligence that will produce an arrest, or to at least deter crime and disorder by having a visible presence on the street. They cruise through high-crime neighborhoods, watching for suspicious activity or obvious violations of the law. When they see something actionable, they stop and make contact. Then they apply skillful questioning (sometimes combined with “ah shucks” banter) in hopes of developing good leads about criminal activity. 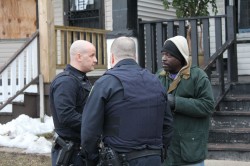 They’re a smooth team. They have an uncanny ability to spot suspicious activity and react quickly and strategically. They are artful at managing their encounters with people on the street.

On this day, the first such encounter begins when a gas-station attendant flags them down. He wants them to roust a loiterer. They talk to the guy, check his ID, warn him that he’s not welcome on the premises. The interaction is cordial, but makes a point: when a law-abiding citizen calls on the cops to help him control his territory, they’ll respond and back him up. That may give the citizen a little more leverage the next time he needs to assert his authority over an interloper.

A little later, Miller and Gadzalinski stop a car that has a temporary license stuck on top of a permanent plate. “That’s obviously a registration violation,” Gadzalinski observes – a small traffic offense, but enough to justify pulling the driver over to the curb.

The two officers approach from either side of the vehicle. Miller talks to the driver. Gadzalinski scans the interior. 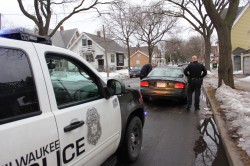 “We don’t know who’s driving the car,” Gadzalinski observes later. “We go up and talk. We don’t have to write a citation. It’s a simple, ‘Hey, get this fixed. Here’s the issues with your car.’”

Even without further action, the stop may have had a deterrent effect, Gadzalinski says.

“People see that our lights are on. We’re in the neighborhood. Who knows who’s getting robbed right here down the alley? The robber may say, ‘The police are doing a traffic stop right there, so I’m not going to do it.’”

In that way, Gadzalinski asserts, “a simple traffic stop where we’re advising the young lady on the violations on the car” makes law enforcement visible and may discourage other, more serious criminal activity…

Darkness falls. Inside the squad (actually a nifty compact SUV), a laptop screen lights up the vehicle interior with a soft glow. An assault-style rifle is clipped to a holder between the front seats, a constant reminder that a routine night can, at any time, turn deadly serious. (Though, as recently reported, Milwaukee police are firing their weapons less often now than they used to).

The officers spot two guys sitting in a beat-up silver-gray Buick outside a house. Gadzalinski rolls down his window and addresses the youth in the drivers seat.

“What you guys up to? How are you guys doing tonight?

Then the officers notice a flat-screen television in plain view in the back seat of the car. “Whose flat-screen is that?” Gadzalinski asks. “You always carry a flat-screen like that in your car?”

By now Gadzalinski and Miller are out of their squad and flanking the vehicle. Miller instructs the driver to get out of the car. 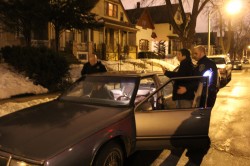 Officer Mike Miller pats down a subject, who is later taken into custody for a probation/parole violation. Photo by Mark Doremus.

“You got anything on you that I should know about? You mind if I pat you down real quick for my safety?”

The driver doesn’t object. Miller pats him down.

Ultimately the young man is taken into custody on a probation violation and transported to the District Five police station for booking.

Back in the squad, and enroute to the station, Miller debriefs me. “We spoke with them about what they’re doing down here. Where you from?”

“The guy didn’t even know his friend’s name,” Gadzalinski interjects. “That was the first sign that something’s not right. He’s got a flat-screen TV in the backseat. Another sign. Then he lies about his name. So it kind of evolved from there.”

Under the 1968 Supreme Court decision in Terry v. Ohio, an officer can stop an individual for questioning if the officer reasonably suspects the individual is involved in criminal activity. In Wisconsin, once a lawful stop is made, the officer can demand the name and address of the subject, and ask for an explanation of the person’s conduct. The officer can require the subject to exit a vehicle, and pat the subject down for weapons.

That’s pretty much how things went down in this case. Then a computerized ID check turned up the probation violation, and the officers acted on that information and took the subject into custody.

“He’s out on probation and parole for, you know, whatever he’s out for. He missed his probation officer’s appointment so his PO put out a warrant out for him,“ explains Miller.

“We don’t have discretion when it comes to probation,” Gadzalinski adds. “You have leeway with municipal warrants, but for state crimes if there’s an active warrant, which there was in this case, he’s got to go.”

One of the striking things about the encounter, and others observed this Friday night, was the casual, almost jocular way the officers handled people once the situation was stabilized. It’s a strategy the officers use to keep the tension down and maintain control.

“We don’t want the situation to go bad,” Gadzalinski says. In the case of the probation violator, “you know he knows he’s going to jail, we’ve got to get him through the booking process. So if it’s cracking a joke here and there, joking along with him, or letting him get in a couple of cracks at us and letting them fall off our shoulders, that’s what we want to do.”

Besides, to the officers the bust is nothing personal.

“Realistically, I’ve never met this gentleman before in my life I have no personal vendetta against him. This is just what it is. I don’t have any discretion. There’s an active warrant and he’s got to go.”