By Andrea Waxman, Milwaukee Neighborhood News Service - Mar 28th, 2013 09:46 am
Get a daily rundown of the top stories on Urban Milwaukee 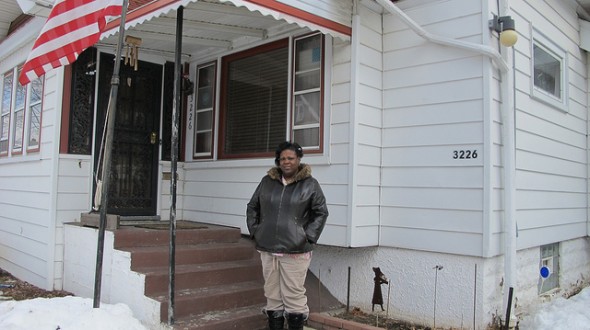 Homeowner Tanyialisa McDowell is the first applicant to be granted a home repair loan under the Borchert Field TIN program. (Photo by Andrea Waxman)

The Target Investment Neighborhood (TIN) initiative aims to enhance the quality of life for residents in central city Milwaukee by providing loans and technical assistance to improve and maintain owner-occupied and rental housing.

The TIN program has existed in Milwaukee for more than 10 years, said Sam Leichtling, program director of the Neighborhood Improvement Development Corporation (NIDC). There are eight neighborhoods that have been granted TIN status, which lasts for three years. Borchert Field, the newest neighborhood in the program, became a TIN in April 2012.

Leichtling said that there were several loan applications in the Borchert Field TIN during its first year but Tanyialisa McDowell was the only applicant who qualified.

“One of the biggest issues is that if people already have delinquent obligations, whether it’s their mortgages or property taxes, then … they are not in a position to take on additional debt,” he added.

“For those people that are able to do it, our program is very attractive because half the funds are forgiven [after five years in the house] and half is paid back at zero interest,” he said.

The money comes from the federal government’s HOME funds and that is why there is a high level of scrutiny in the application process, Leichtling said.  “We want to always insure that we are good stewards of federal funds, so there (is) some paperwork and documentation that goes along with federal funding, and that can sometimes be perceived as overly burdensome,” he added.

The safeguards are set up to protect borrowers, Leichtling pointed out.

In addition to the financial and credit safeguards, NIDC has technical quality control measures built in to the process, including professional help developing the scope of work before contractors get involved, evaluating contractor bids to see that they are in line with NIDC’s independent cost estimates, and inspecting the work during and after construction, before payments are completed.

Leichtling pointed out that in the Borchert Field area, there has been almost no private lending for mortgages in the past couple of years. “There’s a lack of access to credit that we’re trying to fill through the TIN program,” he said.

NIDC has approximately $900,000 from HOME funds and loan repayments available for home and rental rehabilitation loans this year. It will be distributed on a first-come first-served basis, among the eight TINs.

“In total, we’ll probably be able to make only slightly more than half the loans we made last year in this program. …It’s a pretty significant reduction in funding,” he added.

Leichtling said he hopes that more people will take advantage of the home and rental rehabilitation TIN loans as they see the projects that people such as McDowell are doing. “That is the goal of the TIN program to begin with. It’s a really beneficial way for people to invest in their homes.”

One thought on “Eight Neighborhoods Targeted for Home Improvement Loans”