Unlike the last four races, this one won't cost $4 million or so. Why is spending down?

By Bill Lueders, Wisconsin Center for Investigative Journalism - Mar 27th, 2013 10:15 am
Get a daily rundown of the top stories on Urban Milwaukee

What if they held a Wisconsin Supreme Court election and nobody spent staggering sums trying to influence its outcome?

Witness the faceoff between Justice Patience Roggensack and challenger Ed Fallone. With the April 2 election just days away, the race has been supremely quiet — relative, that is, to some of the battle royales of the not-so-distant past.

A tally by the nonpartisan Wisconsin Democracy Campaign shows that spending on the previous four state Supreme Court elections has totaled nearly $20 million, two-thirds of which has come from outside groups operating independently of the candidates’ campaigns.

The current race, like each of these others, pits a perceived conservative (Roggensack) against a perceived liberal (Fallone). Its outcome could preserve or shift the court’s 4-3 balance, now tilted in favor of conservatives.

Yet this column’s prediction a few weeks back that “all signs point to another jaw-dropping spend-fest” seems not to be coming true. The spending is merely substantial, not overwhelming.

The latest filing shows Roggensack raised $497,534 and Fallone $314,269 from Jan. 1 through March 18. That’s comparable to the $400,000-per-candidate grants available when the state sought to contain spending through public financing; the Legislature dismantled this program in 2011.

Several outside groups — Wisconsin Club for Growth, the Wisconsin Realtors and Wisconsin Manufacturers & Commerce — have run radio and TV ads on Roggensack’s behalf. But this spending falls well short of other recent races. And, as if to underscore the lack of urgency, some of these ads have been (gasp!) purely positive.

Meanwhile, the liberal Greater Wisconsin Committee, which poured a total of more than $4 million into the previous four races, appears to be sitting this one out.

Does that mean the role of money in state Supreme Court elections is waning? 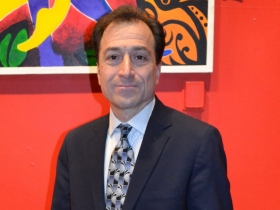 It could just be that Fallone’s allies are reluctant to spend on a fight they don’t think they can win, while Roggensack’s supporters may be practicing moderation because they don’t perceive a serious threat.

Jay Heck of the nonpartisan Common Cause in Wisconsin cites another factor: The ability of public employee unions to back liberal candidates has been diminished — an acknowledged goal of the state’s changes to collective bargaining.

In other words, one side doesn’t have to spend so much because the other side can’t.

And Heck decries the growing partisanship of state Supreme Court races. This includes a recent pro-Roggensack email from Brad Courtney, chairman of the state Republican Party, urging the faithful to ensure that “activist judges do not overturn the great reforms our courageous governor and legislators have fought for.”

“That’s pretty damning and distressing,” Heck says. “This is supposed to be a nonpartisan office.” (The state GOP, through spokesman Nathan Conrad, declined to respond.)

Former Justice Janine Geske agrees it’s been a low-key race. The reasons she gives range from “voter fatigue” after last year’s electoral tsunami, to Fallone’s late entry into the race, to “the recognition that it’s very tough to beat an incumbent.”

Geske draws a comparison to 2009, when Chief Justice Shirley Abrahamson faced Randy Koschnick. Then, too, “people thought there would be a lot of outside spending and there wasn’t.” Both sides apparently assessed that Abrahamson would sail to victory, which she did.

Geske, who like Fallone is a professor at Marquette University Law School, agrees with his critique of the court as being rife with internal division. Watching the justices, she says, it is clearly “very difficult for them to have a prolonged discussion without personality conflicts entering into it.”

Fallone, she notes, has “tried to raise the issue of a dysfunctional court.” She thinks the public has a clear sense that this is a problem on the court.

But, she adds, “there is not a sense of how an election, either way, is going to help that.”