For many years, Gregory Stanford had a regular following for his column with the Milwaukee Journal and its successor paper, the Milwaukee Journal Sentinel. He has had a big impact on the city. He lives in a 1920s Washington Heights house with his longtime partner, art activist Cynthia Henry. But it was in another Washington….Washington, D.C., where he began life on September 11, 1946. 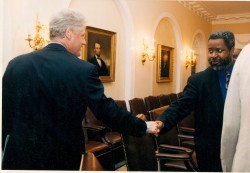 He gives great credit to his parents, both from Birmingham, Alabama, and members of the “Greatest Generation,” as he notes. “They made sacrifices for their children.” His siblings include an electrical engineer brother, a retired lawyer (she prosecuted airline pilots and worked for the F.A.A.), and an administrative assistant sister who has worked many jobs across America. All reside on the east coast. Another brother is deceased.

Their father labored as a cop, a cab driver, and later, as the owner of a trash company with a fleet of trucks that picked up residential trash in suburban Virginia. The business prospered. His mother clerked for the Pentagon and emphasized that education was the key to success, and so it was that Greg’s education began at Our Lady of Perpetual Help Elementary School and continued until he graduated from St. John’s College High School, not because he was Catholic, but because his mother deemed a Catholic education superior to the closest public school.

At the tender age of eighteen, in 1964, he arrived in Milwaukee to attend Marquette University and joined SURE (Students United for Racial Equality), where he became part of the growing struggle for civil rights. Eventually he headed the organization and directed his activism at almost all-white Marquette. “We demanded black courses, black faculty members, the recruitment of black students,” he recalls, adding that the efforts “led to the largest social-justice protest movement Marquette University has even seen, though protests over the abandonment of football may have been bigger.”

SURE had quite an impact. Marquette met one of the demands and established the Educational Opportunity Program (EOP), which continues today, and Stanford says, “is considered one of the top EOP programs in the nation.” In the thick of the civil disturbances in Milwaukee in the summer between his junior and senior years, he found himself interning at The Milwaukee Journal, not as a reporter covering the riots, but rather as a young writer working the sports desk. Meanwhile, he fueled his activism by joining the marathon series of open housing marches led by the NAACP Youth Council and Father James Groppi. 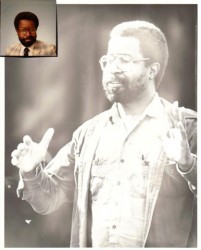 Gregory Stanford in the 70s.

By 1971, with the riots four years in the past, he began working as a general assignment reporter for The Milwaukee Journal. He moved on to the federal beat, urban affairs, and covering the black community. He recalls two high points: One involved covering Police Chief Harold Breier who Stanford says maintained a racially segregated police force, keeping black officers out of south side districts and off of special units, like the tactical squad.

The second high point came in the early 1980s, when Stanford revealed a secret the city was trying to keep: the Justice Department was threatening to withhold federal revenue-sharing funds from the city, because of discrimination on the police force. He wrote follow-up stories revealing the “conditions black police officers faced on the force,” stories stemming from rare interviews of police officers who violated Breier’s gag order against talking to the press.

Stanford says there wasn’t always an awareness of the city’s of racial divide. “I’m the villain or the hero who, for better or worse, created that sense with a blockbuster story in the mid-1980s pointing out that, according to several statistical barometers, black people fared worse in Milwaukee than in about any other metro area in the nation and that the racial gap in well-being was the widest in Milwaukee.”

Here and everywhere, the fortunes of newspapers began a steady decline in the 2000s. Stanford took advantage of the first round of newspaper buyouts of senior staff in 2007 and began to explore other kinds of writing. Since “retiring,” he’s kept very busy.

For starters, he’s written a play titled “Miss Moses,” which recently had a reading at Marquette University. A few more tweaks, and he’ll start looking for a theater company to produce his tale about Harriet Tubman and her efforts to lead two men, two women, and an infant from slavery on Maryland’s eastern shore. As a kid Stanford wondered why Annie Oakley had a show on television, but Harriet Tubman didn’t. He aimed to set that right by writing “Miss Moses.”

In addition, he and Cynthia Henry recently opened a Gallery/Boutique, “AyZha,” in The Shops of Grand Avenue. He’s there several days a week. His sci-fi book is on the back burner, and he also writes blogs at http://gregorystanford.blogspot.com/ That’s where you’ll also find a collection of his newspaper columns. He believes newspapers will somehow survive on the web.

Stanford is still concerned about the city and its progress — or lack of it — in addressing issues like poverty and racism. His favorite quote comes from Frederick Douglas: “If there is no struggle, there is no progress.” An urban guy through and through, Stanford can’t imagine living anywhere else.