The Milwaukee Police In Action

A ride-along shows how a traffic stop leads to a drug bust. Part I of a series.

By Mark Doremus, Milwaukee Neighborhood News Service - Mar 19th, 2013 10:07 am
Get a daily rundown of the top stories on Urban Milwaukee 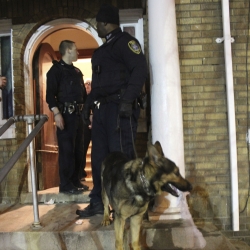 It started with a routine traffic stop on the evening of March 15, 2013. By midnight, officers had followed a lead from that stop to a stash of marijuana, a couple of guns, and a suspected low-level drug dealer.

Urban Milwaukee had a chance to observe this work in action, as this reporter did a “ride-along” with the police, to get a sense of how “data-driven” or “hot-spot” policing, a central tenant of police chief Edward A. Flynn‘s law enforcement philosophy, works in practice.

In this case, the police turned up a small amount of marijuana when they stopped the car for a potential traffic violation. But then, under questioning, one of the occupants of the car offered to make a deal. Go easy on me and I’ll give you a lead on a guy who’s a dealer.

“He says ‘I know this guy, here’s his name, here’s his address. He’s got guns there. He’s got weed there,'” said officer Michael Slomczewski, who was present at the traffic stop and at the later guns-and-drugs bust. This led to the arrest of a suspect we’ll call “Lamont” because his case is still developing.

“So we came here,” Slomczewski continued. “We knocked on the door. They let us in. I said to the suspect, ‘Hey, Lamont. This is why we’re here. We got your information. We got your picture. We got some reported drug activity here.'”

Slomczewski said Lamont admitted using marijuana — but denied selling drugs or having any weapons. Slomczewski then asked Lamont for permission to search the house for drugs and firearms. According to Slomczewski, Lamont signed a consent statement. Then the search, which involved a drug-sniffing dog, began.

According to police, the search turned up marijuana, scales, packing material — items consistent with sales — two firearms and, among other things, an extended magazine that holds 27 rounds.

After he was read his rights, Slomczewski said, Lamont made a voluntary statement and admitted he sold weed. “He manned up to that. He said, ‘Yeah, I sell some weed, when times are tough, to make ends meet.'” Lamont reportedly denied that he owned the guns, but according to Slomczewski he did say that he knew they were in the apartment.

“The information we got from the traffic stop was pretty spot on,” Slomczewski said. “It worked, nobody got hurt — and two more guns are off the street.”

The March 15 bust is a good illustration how Flynn’s aggressive policing philosophy can work — at least when all the pieces of the puzzle come together just right.

“To accomplish our mission to take on crime, fear and disorder head-on,” Flynn wrote, soon after taking over the chief’s job in January, 2008, “we are embracing a community-based, problem-oriented, data-driven policing strategy that emphasizes beat integrity, geographic accountability, the use of problem-solving techniques and a reliance on data to identify threats, measure the results of our interventions, and to hold ourselves accountable to each other and to our community.”

Flynn is not alone in this approach. Other big city police departments have attempted their own versions.

To advance his effort, Flynn combined officers from the Street Crimes Unit, Fugitive Apprehension, Tactical Enforcement, Motorcycle and Canine Units, Marine Operations and Mounted Patrol into a new team called the Neighborhood Task Force or “NTF.” He reduced the number of detectives in favor of more beat cops. And he put a new emphasis on data-driven policing, using a variety of computerized data streams to concentrate police officers in locations where, according to the best available information, crimes have occurred and are likely to occur again, because that’s where the criminals are operating.

Unlike other police officers, members of the NTF aren’t tied to any particular district. They move around as threats arise and reinforce existing police resources in troubled neighborhoods. Their mandate is to sweep into high-crime areas, as identified by real-time police data, and make things uncomfortable for the bad guys.

Based on direct observation during a ride-along with NTF officers, it appears that they spend much of their duty time simply cruising their assigned areas. They look for suspicious behavior. They roust panhandlers and potential troublemakers out of gas station parking lots. They stop vehicles that run stop signs, or have visible defects, or expired plates. They roll down the window and question people who are walking in the street.

The traffic stops, in particular, have been controversial: the Milwaukee Journal Sentinel did a story which found minorities were more likely to be stopped by police. Flynn’s response was that any disparity tends to reflect the make-up of neighborhoods where these crime hot spots are located.

Most of the time the stops produce nothing more than a reminder to walk on the sidewalk, or get that vehicle registration up to date, or pay those outstanding parking tickets, or just a friendly wave. But every once in a while the NTF officers stop somebody who’s wanted for a crime, or a probation or parole violation. Or they turn up a lead that can be developed into an arrest, as was the case with the March 15 guns-and-drugs bust. And this kind of proactive policing is at the heart of Flynn’s approach to crime-fighting.

This is Part 1 of a series on how the police department attempts to fight crime.

2 thoughts on “Flynn’s Force: The Milwaukee Police In Action”