New high-tech companies and their workers want bike-friendly cities, and Chicago is out to beat Portland and Seattle in that regard.

By Dave Schlabowske, Bike Federation of Wisconsin - Mar 15th, 2013 10:31 am
Get a daily rundown of the top stories on Urban Milwaukee 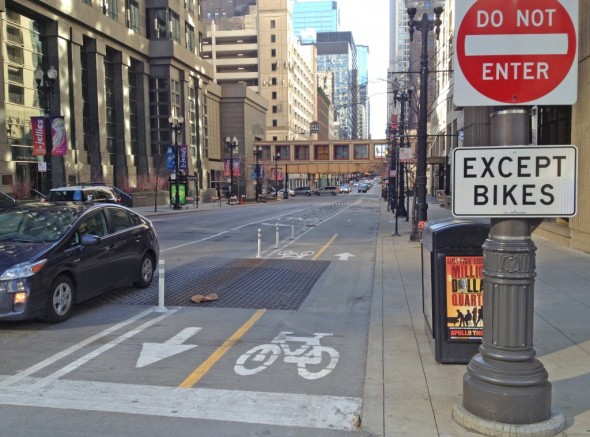 Over the weekend I crossed the Cheddar Curtain to see my brother’s band “The Waco Brothers” play in Chicago. I also went down to deliver him his Schwinn Suburban that he had to leave behind when he recently moved to Austin. The show was great, and the Schwinn hand-off worked like a charm. My brother once again has two-wheeled transport and a way to get around Austin other than walking or transit.

In addition to Dean’s Schwinn, I also brought one of my folding bikes so I could get around in the Windy City. On my way from my hotel to catch Amtrak, I finally got a chance to ride in the new two-way protected bike lane on Dearborn. The Dearborn lane is the first two-way European-style cycle track among 30 miles of innovative, protected bike lanes constructed in the first 18 months of Mayor Rahm Emanuel’s tenure. It is also the first protected bike lane in the Loop.

While the Dearborn Street protected bike lane is not quite as impressive as some I have ridden on in New York City, it offers all the same protections and level of comfort. As you can see by the video I shot with my phone, Dearborn is a two-lane one way street with parking. It used to have three motor vehicle travel lanes, but they put it on a road diet to fit the two-way bike lane, protected by flexible bollards and a narrow buffer zone.

While the innovative facility made the bike ride a breeze from my hotel on the Magnificent Mile to Union Station to catch the train back to Milwaukee, the best thing about this project is why and how it was installed. This is a classic example of a Mayor who gets the link between bicycling and the new economy. Say what you will about Emmanuel’s other policies, he has taken a leadership role in making Chicago a better city for bicycling.

While he is a bike guy, Mayor Emmanuel is making these investments in next-generation bike facilities to do more than help bikers. He seems pretty confident that the 100 miles of protected bike lanes he promised to build by the end of his first term are a key ingredient to attracting new high-tech start-up companies and all the jobs and economic growth that come with them.

I have been holding off reporting on this protected bike lane until I had a chance to ride it, but it has already garnered plenty of media attention across the country. Below you can read some of Emmanuel’s bold statements from the original ribbon cutting press conference December 17th, last year:

“I am pleased that the City of Chicago is leading the country with the most protected bike lanes of any city in the country, and we are not resting until we get to that hundred miles. The great cities of the Pacific Northwest no longer have a free ride as the top bicycling cities in the United States. It is not an accident that, where we put our first protected bike lane is also where we have the most concentration of digital companies and digital employees. Every time you speak to entrepreneurs and people in the start-up economy and high-tech industry, one of the key things they talk about in recruiting workers is, can they have more bike lanes.”

“Two facts in the last year, coincidence? I think not: One, the City of Chicago moved from 10th to 5th of most bicycle friendly cities in the country in one year. No other city has moved up that far, that fast, that quickly… In that same year, Chicago moved up from 15th to 10th word-wide in new start-up economy. No other city has moved that far, that fast, that quickly. You cannot be for a start-up, high-tech economy and not be pro-bike, the two go hand in hand. So when my staff gave me this headline from a magazine in Portland, I couldn’t help but smile. The headline read ‘We talk in Portland, they do in Chicago.’ The Seattle Bike Blog wrote, ‘Seattle can’t wait. We are now in the position of being envious of bike lanes in Chicago.’

You can see more of his speech and additional photos and a before and after video of the Dearborn bike lane on Dottie’s great Chicago blog Lets Go Ride A Bike.

Those are inspiring words from a city mayor. They tell the citizens that he cares about jobs, and he understands that for cities to compete, they need things other than tax breaks and multi-billion dollar freeway interchanges. Cities still need to provide for motor vehicles, of course, but they have to think about moving people and goods, not just cars. They need culture and healthy, fun, convenient and attractive ways to get around other than driving a motor vehicle.  Heck, even Motor Trend understands,

“Young people are returning to big cities and to near-urban, walkable suburbs, co-author Dutzik says. Many remain connected via smartphone for their entire mass transit commutes to and from work. They also are more interested in saving the planet, he says, though the economy remains the biggest factor. These young non-drivers are weaning themselves from cars, and won’t necessarily rush to buy them when the job market improves.”

There are lots of reasons why companies choose to locate in youth-magnet cities, but good opportunities for bicycling is one of the easiest things any city can add to get in the race for talented workers and start-up companies. Does a good school system help? Sure, but that is a tough and expensive nut to crack if you don’t already have one. Does a great climate help?  Yeah, but there is not much we can do to change the weather (don’t get me started on climate change). Of course culture, cafes, and entertainment are important too, but if you don’t already have that, it takes time to incubate.

Innovative new bike facilities like protected bike lanes on the other hand are cheap and easy to build. Want to be the best big city for bicycling in the country? Portland managed it on about $60 million of total investment. Compared to education budgets, and highway and transit costs, bicycling is a cheap and easy date.

So, who will be Wisconsin’s first mayor be to stand up and warn the rest of the country to watch out for his city? Will we see a Milwaukee mayor challenge Minneapolis for bicycle bragging rights? Will a Madison Mayor challenge Boulder? We we be able to compete if we don’t?

One thought on “Bike Czar: Will Chicago’s Bike-Friendly Policies Steal Jobs from Seattle?”