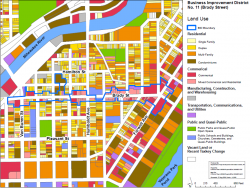 The Brady Street neighborhood on Milwaukee’s Lower East Side has long considered itself a land bridge between the Milwaukee River and Lake Michigan. It was the site of a now-retired Tax Incremental Financing District that made significant street improvements in the early 1990s. The street now includes a Business Improvement District #11 that works with the neighborhood association to promote the street. The newly elected president of the BID is Alaa Musa, whose Casablanca on Brady Restaurant was significantly expanded last year, bring new attention to the west end of the street, which has been slower to take off than the end east of N. Humboldt Ave. [The new vice chair is Julilly Kohler, returning to the district after many years’ absence.]

But now, with development  heating up, district members are informally considering expanding its borders to take in account current and future development. Since the district’s establishment over 20 years ago, new locations have gone into business in the general area, others not originally included in the district might care to join, while still other companies will likely locate in the area, which has seen considerable development recently with such things as the North End, 1910 on Water, and other projects.

Businesses not in the district, but within reasonable proximity include Trocadero, The Hamilton, Brocach Irish Pub, Bel Air Cantina, Finks, The Standard, and even Lakefront Brewery, located across the river. None of these was in operation when the original BID map was drawn. The BID could conceivably expand north and south on N. Farwell Ave. at its eastern limits.

The western end of the street awaits the development of the former Habhegger Co. site on N Water St., just south of the Holton Marsupial Bridge, where the Wangard Companies, developers of the 1910 on Water building, planned to start work this summer on 150 apartments and 15,00 sq. ft. of commercial space at Brady’s western end, overlooking the Milwaukee River. Ald. Nik Kovac said Wangard wants a Tax Incremental Financing District for its site, but the city does not seem to be making them anymore, especially for commercial space, parking structures and other development components. Wangard also proposed the Park East Square apartments for a block west of the East Pointe Pick ‘n Save in the Park East corridor, with over 100 new dwelling units and about 15,000 square feet of commercial development. But the shovel has not hit the ground at that location. These are all very plausible locations for an expanded BID. 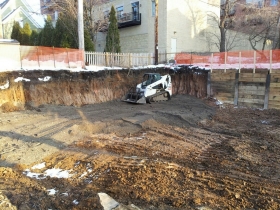 In other recent development news, apartments at 1601 N. Jackson St, at what was once Joey’s restaurant, are well out of the ground, with work continuing steadily. Elan Peltz has bulldozers grading his project at 1530 N. Jackson St., while a project just to the south at 1509 N. Jackson St. has had little visible recent progress.  According to an email from the project developer Michael O’Connor, “18 [geothermal] wells were sunk to an average depth of 350 ft” on the site. But today there are no footprints in the snow outside the portable toilet there, a sign of nothing going on.

Things are a little bit livelier on N. Water St. where the old O’Brady’s tavern at 1632 [a.k.a. 1634] N. Water Street is being remodeled by Dan Fitzgibbons, who closed his bar further down the street a few months ago. Fitzgibbons had hoped to open the place by St Patrick’s Day, which is drawing nigh. He said, “I don’t think I am going to give this place an Irish name. I tell people the address, and they can’t seem to place it until I tell them it’s located where Water Street curves up there. Then they all know the place I’m talking about, so I think I’m going to call it “The Curve.”

Fitzgibbons rents the property from Jim and Sue Wiechmann, who hold it for future development and have told Fitzgibbons he should have about “four years” before that happens, he says. 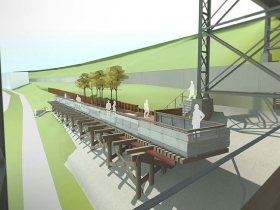 As reported here earlier, a long-delayed pedestrian connection to the Holton Marsupial Bridge is underway, with completion expected late this summer. When finished, the walkway suspended beneath the Holton Viaduct will have an entry point at the front door of Lakefront Brewery, which has become one of Milwaukee’s leading tourist attractions.

According to Sandra Rusch Walton of the City of Milwaukee: “Improvements consist of re-decking the old trestle with a new concrete deck, adding concrete steps at both the east and west ends of the trestle, adding concrete benches, a custom steel railing with LED lights, an IPE wood deck as used on the Marsupial Bridge, added wild flowers and planters, trees and up lighting.

“The Marsupial Bridge is to remain open during construction except for a few weeks when additional asphalt is applied to the north landing area.”

La Dallman Architects, the original architect of the Marsupial Bridge is reprising this role; T J John and Son of Butler is the contractor. 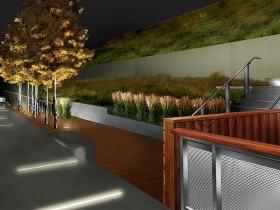 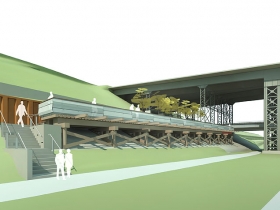 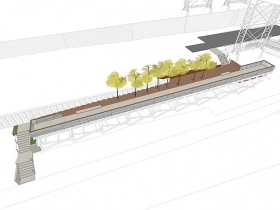 But none on the list was from Wisconsin, home to 9 Fortune 500 companies. Among those companies, Milwaukee-based  Rockwell Automation was one of three Wisconsin corporations chosen as  Best Places to Work 2013 by the Human Rights Campaign, along with “Family Company”  S C Johnson and Foley & Lardner, the nation’s 29th largest law firm.

The New York Times said the filing of the briefs was a “corporate call for change,” calling it “the latest sign of the rapid shift toward acceptance of same-sex marriage in the corporate world as well as in the country. Recent polls indicate that a majority of Americans now agrees that same-sex marriage should be legal.”

But Wisconsin corporations, even those with active policies encouraging equality in the workplace, missed the chance to add their voice to a historic call. Maybe the folks at Rockwell were too busy automating factories, and the family at S C Johnson had their hands full with consumer questions about Pledge and Edge.

But Foley and Lardner, with 874 attorneys on staff, clearly should have been aware of the amicus call, and certainly could have found somebody to draft one, possibly at one of the firm’s offices in Massachusetts, New York or the District of Columbia, all of which permit gay marriage. [Rockwell has sales offices in the gay marriage states of Iowa, Maine, Massachusetts, New York and Washington.]

The companies did not immediately respond to a request for comment on this matter. 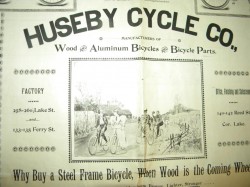 This month I will discuss “The Bicycle History of Milwaukee” at Shakers, 422 S. 2nd St. on Wednesday, March 13th 2013. I’ll get there after work, hang for awhile and then get down to my topic, based on original research compiled here and there over the years, and augmented by the efforts of many bicycle enthusiasts here. A special treat will be an authentic 1896 advertisement for the Huseby bamboo bicycle, made on S. 2nd St. in 1896, and hidden away in the basement of the Milwaukee Public Museum. Free, 7 p.m. Sign up here!