Yes, Urban Milwaukee's founder is an immigrant to the city. Why he loves it and would like to see improvements. 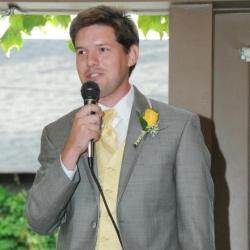 Editor’s Note: Yes, it’s a bit unusual to profile this publication’s founder, but the choices for this weekly feature are made by NEWaukee’s president Ian Abston, and we thought readers would be interested to read this. As always, you can let us know in the comments section.

How long have you lived in Milwaukee and why did you choose to move here?

I grew up in Janesville and moved here in 2005 to study Management Information Systems at the Milwaukee School of Engineering. I was excited at the notion of moving to a big city, and especially with the prospect of going to college in the heart of it. I graduated no worse for wear in 2009 and have been joyfully self-employed since.

What about Milwaukee makes it a place you want to work and play?

The big city amenities are certainly nice, be it the sheer number of parks, events, bars, restaurants, etc., etc., but with rare exceptions every big city has those. What sets Milwaukee apart is the historic built environment and the willingness of a growing group of people to open doors for you. On the built environment side, we have unique Cream City brick buildings, while cities like Minneapolis and many others demolished nearly everything historic they could find and put in surface parking lots. On the doors opening side, if you’re willing to work hard it’s relatively easy for an entrepreneur to get noticed in Milwaukee. The success of businesses like NEWaukee, ART Milwaukee, and Spreenkler is proof of that.

What is your favorite Milwaukee event?

Bastille Days is easily my favorite. It incorporates just about everything that makes Milwaukee a great city. It’s an ethnic festival (although I can’t remember the last time I’ve met a French Milwaukeean), but it’s not held in the same, isolated place as so many other festivals are. It’s kicked off by a night-time run through the city streets that, up until MJ’s on Milwaukee bar closed, featured an unofficial beer stop (get on that Smoke Shack) as you ran through East Town and the Historic Third Ward.  For the duration of the festival the streets are closed and filled with vendors, and later in the evenings the fun doesn’t stop as the bar-going crowd takes hold. Numerous stages offer nearly non-stop entertainment, and not just the same stuff you see at every street festival. Plus, there is a mini-Eiffel Tower. What’s not to like?

What is one thing you’d like to see change about Milwaukee?

I wish I had a genie in a bottle to fix a number of issues. Most pressing in my opinion is finding a dedicated funding source for mass transit. Most Milwaukeeans are blissfully unaware of the substantial cuts coming to the Milwaukee County Transit System thanks to reductions in state aid that were temporarily replaced with federal funding. When those cuts do come in 2014, they’re going to make a bad issue worse. The Milwaukee region is heavily Balkanized at the county lines. Milwaukee needs a truly regional mass transit system, not only to better connect the city’s most densely populated areas with downtown and each other, but to provide transportation at a reasonable speed for workers in Milwaukee (many of whom lack cars) to jobs in Waukesha County. Infrequent, long bus rides across Milwaukee County that drop riders at the county line aren’t the recipe for success for a region struggling to carve out an identity in the 21st century. People move to places like Portland and Denver without a job because these cities have chosen to invest in themselves, spending on parks and transit and other public infrastructure, and Milwaukee needs to catch up with them.

What do you do?

I’m the founder and President of UrbanMilwaukee.com. We’re an online daily that champions urban life in the Cream City. It’s crazy to think how it’s gone from a dorm room idea I had in 2007 to something with thousands of daily visitors. It, however, wouldn’t have happened without the contributions of the two key partners I’ve accumulated along the way, Dave Reid and Bruce Murphy, and support from others too numerous to mention. Dave and I also operate Urban Milwaukee: The Store at 755 N. Milwaukee St. selling Milwaukee merchandise. And because, for better or worse, I can’t sit still, I also do web development work for a number of local businesses.

3 thoughts on “Newaukeean of the Week: Jeramey Jannene”