Cycling novels are on the rise. Three good reads I can recommend.

By Dave Schlabowske, Bike Federation of Wisconsin - Mar 1st, 2013 10:28 am
Get a daily rundown of the top stories on Urban Milwaukee

Curling up with a good book by the fire is one of my favorite things to do on a cold night. I enjoy a wide variety of books, but I make a point of reading most novels that have to do with cycling. In the last couple weeks, I’ve read three new cycling-related novels. All three I can recommend as good reads, but honestly none of them is going to knock Moby Dick off top of the literary heap. 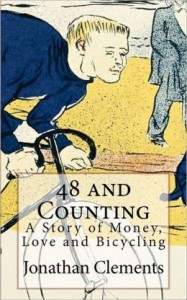 I started off with Jonathan Clements’ 48 and Counting, A Story of Money, Love and Bicycling. Clements novel follows Max Whitfield, a wealthy 48-year-old investment advisor who dusts off his old bicycle and takes up cycling just as his marriage and business begin to collapse. While Max seems to be losing everything he worked so hard for, he takes solace in turning pedals and training for a race.

Clements is an avid cyclist who lives in New York City, but his real expertise lies in personal finance. Currently the Director of Financial Education for Citi Personal Wealth Management, for 18 years he was the personal-finance columnist for The Wall Street Journal. This is Clement’s first novel, but he has written four other books about personal-finance. While the book is about how bicycling can help a man through a mid-life crisis, fans of his finance books will probably enjoy the side-story about how his business fell apart.

Women might take a bit of offense that Clement does not paint a very positive characterization of women in the book. If that sort of thing bothers you, skip this book and try one of the other two below. 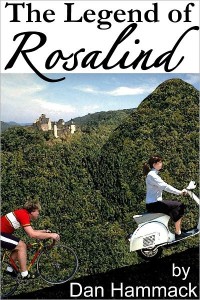 The Legend of Rosalind by Dan Hammack is a romance wrapped in a pro cycling jersey. While the protagonist, Jason Mitchell, is still a guy, the women he falls for in the book are both strong female characters, neither of whom is named Rosalind by the way.

Instead, Rosalind is the nickname Mitchell’s bike, which gains legendary status throughout the course of the novel. An American racing in Europe, Mitchell is forced to find a new team after his US team suddenly disbands. After a bit of international intrigue, he ends up riding for the Luxembourg team. The novel is set in 1978, back in the days when racing was very nationalistic, Europeans ruled the peloton and before Greg Lemond and 7 Eleven team began to make their mark.

Hammack is an amateur cyclist himself, but you can tell he has clearly drunk the Kool-Aide by all Facebook photographs of him riding up Alp de Huez, the Galibier or with Luk the Devil at the 2005 Tour de France. If that is not pedigree enough, he has photos of himself with some excellent references pro cycling references: Eddie Merckx, Phill Liggett and Paul Sherwan and Jens Voigt. His writing reflects a great understanding of bike racing, and more importantly, imparts a real feeling for what bike racing was like back in the 70s. I definitely recommend this book. 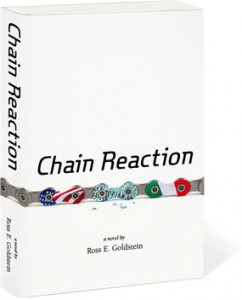 Finally, I end with a contemporary story set in our current days of pro cycling, replete with all the issues of big money sponsors, doping and the struggle to race clean. Chain Reaction, by Ross E. Goldstein was the last of the three cycling novels I read, and I think it was my favorite.

In Chain Reaction, we are introduced to 23-year-old Cal Scott, who is working as a barista at home in California and for some reason no longer rides for his former T Mobile team. Not only does he not race for T Mobile, Cal has quit racing entirely. Feeling like his son’s life is going nowhere, Cal’s father, a serious amateur cyclist himself, talks Cal into going to Italy with him for a “vacation” to ride.

Like The Legend of Rosalind, Chain Reaction is a novel about bike racing with a thread of a love story woven into the carbon fiber. Goldstein does a good job balancing the racing story with the side story of romance. The main characters in this book are also very well-developed. If you are only going to read one of these books, I suggest you begin with Chain Reaction.

All of these books were enjoyable page turners. Once I started reading, they were all interesting enough that it did not take more than a few long nights sitting by the fire to go from cover to cover. Obviously, that leaves me looking for a new cycling novel to read. Any suggestions?

One thought on “Bike Czar: Three Novels About Bicyclists”