A Veteran Who Helps Veterans

The challenges and joys of helping veterans find jobs. 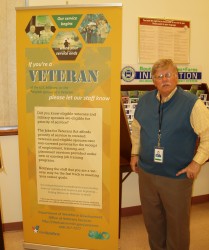 A placard at the entrance to all the job centers alerts veterans to the services available to them. Photo by Peggy Schulz.

No Marine is a “former Marine,” Greg Williams insists: “Once a Marine, always a Marine.”   For Williams, who served with the Marines in Vietnam, that sense of collegiality extends to all armed forces members.  It’s the primary motivation that keeps him serving as a lead employment representative for the Wisconsin Department of Workforce Development, Office of Veteran Services, in Milwaukee.  “I felt I owed the veterans who didn’t come back, or who came back broken,” Williams says.  “We all owe them something.”

While Williams sometimes works one-on-one with veterans, his main function is to recruit employers, and work with the Milwaukee County Veterans Services centers and the Veterans Administration Medical Center to find jobs for vets.

Williams began working for the state in 1980.  In 1986, he left to start his own business, in the environmental area.  He ended that phase of his work life in December 2002 and was back working for the state by March 2003.  All of the Department of Workforce Development employees who work with veterans are themselves veterans with service-connected disabilities.  Williams acknowledges that Post-Traumatic Stress contributes to his partial disability.  And, he knows he’s not alone.  “People in our society deal with PTS for any trauma, not just veterans – a horrible car accident, Hurricane Sandy, there are all these traumas out there,” he says.  “Obviously, the trauma of war may last longer.  I don’t think you could ever say you’re cured of PTS; it doesn’t go away.  But, you can learn how to live with it successfully.”

Williams was among many who helped plan the upcoming Veterans Only Job Fair on March 7 at the War Memorial Center.  This will be the ninth such event in Milwaukee.  Williams expects between 70 and 100 employers to be there interacting with veterans. 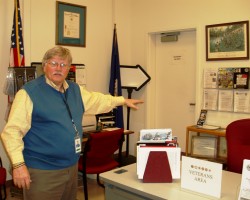 Greg Williams highlights the many print resources available in the veterans area at the Job Center of Wisconsin Southeast. Photo by Peggy Schulz.

A newer challenge is older veterans who recently lost jobs due to the poor economy, and face a more complicated application process today.  “The work search process is so much different now than 15, 20, 30 years ago,” Williams says.  At the March 7 job fair, in fact, many of the employers will take the veterans’ information, but the veterans will have to then go on-line to complete formal applications on the company’s website.  One of the popular job center features  a computer area where job seekers can get assistance navigating the Internet.

They may also need retraining. “If a guy has spent 30 years in the printing industry, for example, and he loses his job, he’s gonna’ need re-training to get into some other field.”  That’s part of the challenge for Williams, to keep on top of which industries are “hot” at any given time.  He sees a lot of potential now in the skilled trades.  With both state and federal GI Bill resources, a veteran can begin a job in many of the trades as an apprentice and receive monthly stipends for living expenses, or attend a technical college for an associate degree, in fields such as masonry, pipe-fitting, machining and carpentry.

Veterans who come to any of the job centers are first given a comprehensive assessment.  “We look to see whether they’re job-ready now, or need some training, or to go back to school before they can go on to a career.” Williams encounters workers hampered by limited or no computer skills, or vets who haven’t dealt with service-related, psychological issues.  “Because we’re all veterans here, we can relate well to the veterans who might not be as open with non-veteran job counselors,” Williams says.  “We’re not clinicians, but we are trained to see those signs.” 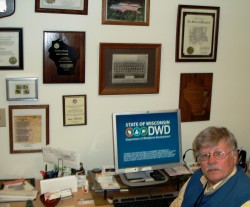 Some of the many certificates Greg Williams has earned over the 16 years he’s been with the DWD are displayed in his office, as well as a photo of his father’s Marine unit from World War II. Photo by Peggy Schulz.

Williams completed a training program at the University of Denver National Veterans Training Institute in Colorado.  “That’s part of the federal government making sure that, throughout the country, veterans are receiving continuity of service regarding employment.”

Once he has what he thinks is the right match for an employer, Williams emphasizes the value of what he’s promoting – mature, experienced, responsible veterans who can contribute to the employers’ bottom lines.  “They’re businesses first. They’re looking to hire the best people.  With vets having extensive training and practical experience in the military, why wouldn’t you want to hire a vet?”

Despite the everyday challenges, Williams loves what he does.  “This isn’t like work to me.  There isn’t any better job than what I’ve got. If you can do what you like and get paid for it, how great is that?”