The life and times of an award-winning school social worker.

Al Cimperman’s dad served in six World War II campaigns but his son didn’t want to serve in Vietnam. Like many of his generation, he saw a different way of serving. He thought about becoming a priest and ultimately became one of Milwaukee’s most well-regarded school social workers. 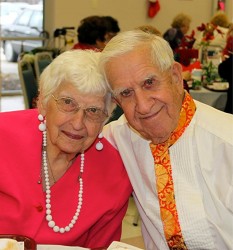 When Barack Obama campaigned for the 2012 presidency in Parma, Ohio, a suburb of Cleveland where Al grew up, it was his dad who led the Pledge of Allegiance.  “Dad was a security guard for a huge General Motors (Chevrolet) plant in Parma. He served at D-Day on Omaha Beach in Normandy, and for that he received the French Medal of Honor,” says Al. “Mom graduated from high school and went right to work in a plant that made parts for WWII planes. Later in life, she made vestments and altar cloths for priests.”

The Cimpermans’ heritage was Slovenian but they were true blue Americans. The family car was always a Chevy, and they saw quite a bit of the USA in their Chevrolet.  His dad still drives a Chevy; the plant where he worked is still going. The family’s backyard was a combo baseball and football field, with a basketball court as well.  Al played a lot of sports. Home-run hitter Rocky “The Rocket” Colavito was his favorite player on the Cleveland Indians’ team.

His full name was Albert Louis Cimperman. He was the oldest of six children and attended one Catholic school after another: for starters, St. Francis De Sales elementary school, then Padua Franciscan High, where he once almost beaned his principal with an eraser. “Today I’d probably be diagnosed with ADHD, but back then,” he says, “it was dealt with by strict discipline.” Cimperman had became involved with a group of boys who envisioned a calling to the priesthood, which led him to enroll in a Franciscan Seminary in Quincy, Illinois. Eighteen months later, he decided it wasn’t his niche. “But the experience helped me focus more on academics,” he says.

For many young people who attended college in the tumultuous 1960s, sociology was a way to help them figure out what was going on in their world. Cimperman found a mentor (a professor from Milwaukee) when he transferred to Quincy University, yet another Franciscan venue. “He told me about social work, and set up an internship for me with a Boys Treatment Center in Quincy, and that led to learning about the civil rights movement and Martin Luther King.”

Quincy, like many other places, was in the grips of open housing protests. Cimperman joined the protestors. In the summer, it was back to Cleveland to work for the welfare department. That included the summer of 1967-68, when race riots erupted and the National Guard was called in. He vividly remembers the Jeeps and armed Guardsmen roaming the inner city neighborhood where he was working. It was a “War at Home,” as some later dubbed it,  and the era of the draft lottery.

Cimperman’s number? 308. He says he had all of his conscientious objector papers in order, but after his luck-of-the-draw, he decided not to pursue CO status. His dad didn’t know about his CO plans, but did object to his son’s long hair and beard.

The search for graduate schools began, and because UW-Milwaukee was recommended by the mentoring professor who knew it, Cimperman applied, and received a stipend that paid for his tuition, books and some lodging. President Johnson’s War on Poverty was still going, he says, “and funding was available to train and hire social workers.” In June, 1970, he graduated with an M.S.W. in Social Work. That same year he wed Pat. The two met at a Milwaukee concert a year earlier. “It was at ‘The Barn’ (now Shank Hall),” he says. They returned during the following years and often listened to Jim Liban and his band.

Pat, too, became involved in helping others, and for many years after their marriage, worked as a City of Milwaukee public health nurse, and at St. Mary’s Hospice program, and for the past 19 years, as a school psychologist at Gaenslen School. One of their grown daughters uses her social work degree, in Missoula, Montana, in a program that helps families and children cope with learning and mental health issues. 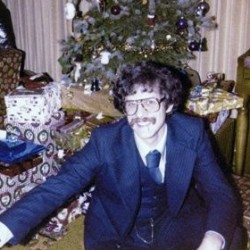 Al worked at the VA Hospital in Milwaukee (1970-73), at the Martin Center, a now defunct residential treatment for boys (1973-76), the Farwell Counseling Clinic, and finally, as a social worker for Milwaukee Public Schools, from 1977-2009. It was a job that more commonly attracted women, but Cimperman loved it. In 1989, he received the MPS “Social Worker of the Year” award.  During the latter years of his career, he trained new social workers, co-coordinated city wide assignments and graduate social work students placed with MPS. Like the professor who mentored him decades earlier, Cimperman shared his vast experience with others. For his work with college social work students placed at MPS, Cimperman was awarded a “Lifetime Meritorious Achievement Award” by UWM’s Helen Bader School of Social Welfare.

Cimperman bikes (he lauds Trek, a Wisconsin product), jogs, hikes, and weather permitting, hits the snow to cross-country ski. City riding is a combination of the bike trail (both Oak Leaf and Henry Aaron), as well as road rides up Lake Drive. For several years prior to retirement, he directed the ropes and challenge program for Milwaukee Public Schools. Kids learned about team building, social interaction and physical skills that helped strengthen their still young lives. 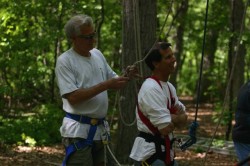 Ropes & Challenges. Al Cimperman (on the left) and colleague.

But Al Cimperman isn’t about to really retire. He works part time at UWM, teaching a practice course required for school social work certification, and also teaches two summer courses in experiential education through McPherson College. “In addition,” he says, “I do part time counseling for Life Span Family Services, which has offices both on the East Side of Milwaukee, as well as in Elm Grove.

Did we mention he’s seeking some volunteer work?

Wauwatosa Struggles With History of Racism by Corri Hess

Is Trump a Problem for Down Ballot Republicans? by Melanie Conklin

State Spends 15th Most on Police, Corrections by Henry Redman