By Dave Schlabowske, Bike Federation of Wisconsin - Feb 22nd, 2013 10:20 am
Get a daily rundown of the top stories on Urban Milwaukee 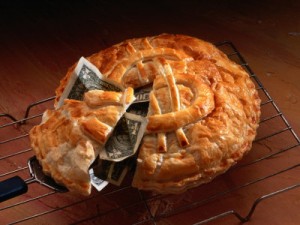 A smaller slice of the pie.

The 2013-2015 budget (AB40) Gov. Scott Walker submitted to the State Assembly  yesterday proposes to increase the biennial transportation budget from $5.7 billion to $6.4 billion. Hold on though, even though the pie just got a lot bigger, the slice for people who ride bikes is significantly smaller. I have consolidated the many line items that make up each program into the simple table below. I also added the total amount of money the federal transportation budget makes available to Wisconsin for projects related to bike-transit, compared to what the state proposes to actually use for that purpose.

You can see the federal transportation budget has made $44.6 million available to Wisconsin in 2014 in  categories that can be used to pay for bicycle facilities, but the state is allocating just $25.5 million in 2013-’14 for those categories. For 2014, the feds have again provided  $44.6 million in bike transit-related funding but the state plans to spend just $25.6 million in those categories. Of about $89 million provided by the feds over this two year period, the governor’s budget only proposes to spend about $51 million (compared to nearly $70 million in the last biennial budget). So where is the remaining $38 million going? The federal transportation budget allows states to shift 50% of the Transportation Alternatives funds to highway projects, and that’s likely where the money went. I’m sure we are not giving that money back to the feds.

But the bottom line to bike folks is that even though there is a lot more money in the proposed two-year state transportation budget, this budget not only shorts us the money the feds are offering, it allocate even less money than was in the last state budget. That is quite a double whammy.

If you care about this, it is extremely important to remember that the state legislature still has until some time around July to modify and approve the budget. That gives advocates, business leaders and civic leader who care about our treasured bicycle assets time to talk to their elected representatives in the Senate and Assembly to convince them to restore the full funding for programs that fund bicycle projects.

The easiest way to effect change is to call, email or meet with the people who represent you in the State Capitol and tell them that you would like them to spend every one of the comparatively few dollars the feds give Wisconsin for bike projects on bike projects. It is also critically important that people who care about funding for bicycle projects come to the Bike Fed’s Lobby Day, April 9th. We do a lot of the work for you by setting up meetings for constituents in each district. We also give you clear, detailed information so you can make an intelligent ask.

In the mean time, we are working to set up a meeting with the Governor and key legislative leaders to explain all the good that bicycling does for Wisconsin. From the nearly $2 billion economic impact to the quality of life  benefits that make our state a great place to live and an attractive place to do business, few things have as high a return on investment as bicycling.

So please, contact your elected state officials and tell them you bike and you vote, and stay tuned here for updates.