Common Ground has a $5 million plan to rehab foreclosed properties in the Sherman Park area.

By Brendan O’Brien, Milwaukee Neighborhood News Service - Feb 20th, 2013 09:00 am
Get a daily rundown of the top stories on Urban Milwaukee 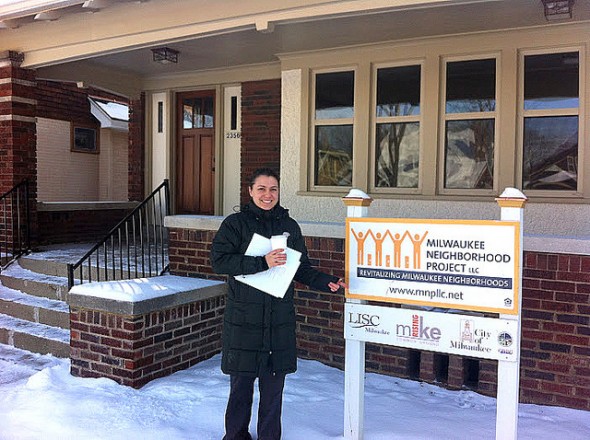 Common Ground, a grass-roots political organization, has created a separate entity to continue its housing stabilization effort in Sherman Park, a neighborhood that was hit hard by the foreclosure crisis.

Milwaukee Rising needed autonomy from the organization’s political activities so it can receive property and cash donations as well as loans, according to Kathleen Patron, the lead organizer at Milwaukee Rising.

“At Common Ground we fight and not everyone likes that, so we can’t be beholden to anybody,” she said.

The Milwaukee Rising LLC is seeking low- or no-interest loans of $500,000 or more from individuals and corporations with the hope of raising $5 million for a revolving loan pool. 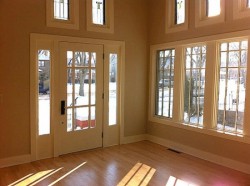 Milwaukee Rising rehabbed the interior of this house at 2837 N. Grant Blvd. (Photo by Brendan O’Brien)

Because Milwaukee Rising LLC is generating capital through individual and corporate lenders, it will not need to rely on funding from the government, such as Neighborhood Stabilization Project funds that come with restrictions, according Frank Finch III, a Milwaukee Rising LLC board member.

“There were so many restrictions that there was no way for us to function well,” he said.

Milwaukee Rising LLC will use the money it borrows to acquire and rehabilitate property and to provide no-interest lines of credit to contractors and developers. The money made from the sale of rehabbed properties will be put back into the pool. After five to 10 years, loans would be returned to lenders.

Milwaukee Rising focuses on the area bordered by Grant Boulevard to the east, 60th Street to the west, North Avenue to the south and Concordia Avenue to the north.

Two years ago when the project began, more than 300 homes were vacant in the zone. Now, there are 218.

“Part of what (we) do is organize people on the block,” Patron said. They then do whatever it takes to improve the property.

One approach has been for Milwaukee Rising to provide up to $5,000 to owners to make home improvements such as fixing a roof or replacing windows.

The effort has resulted in a drop in crime in the area, according to anecdotal evidence Patron has gathered from police.

The Milwaukee Rising project began to take shape in 2008 when members of Common Ground took a tour of Sherman Park and asked people what concerned them about their neighborhood.

“It was vacant properties,” Patron said. “So we decided to do something about it.”

Volunteers and Sherman Park residents hounded bank executives and went to bank stockholder meetings where they voiced their displeasure about what vacated, foreclosed houses were doing to their neighborhood.

They also had a list of demands: market-rate mortgages, $300,000 for a rehab fund and $100,000 to start a quality property servicing company that would maintain foreclosed properties and provide jobs.

After two years of persuasion, Wells Fargo, Deutsche Bank, Bank of America, Chase and U.S. Bank agreed to help Milwaukee Rising’s effort in Sherman Park, making a $33.8 million commitment to the neighborhood. Milwaukee Rising also received $2 million in Neighborhood Stabilization Project funds through the federal stimulus program. Bank of America is giving the group 10 houses a year and $10,000 to rehab each of the houses.

Recalling her success convincing Wells Fargo to work with Common Ground, Mary Utschig said, “It was quite a high.” The soft-spoken 75-year-old, who lives in Sherman Park, has been instrumental in the Milwaukee Rising effort.

“I’m very proud of the work we have done and it continues to be hard work, but that’s OK because I think the city’s worth it.”

One thought on “Raise High the Roof Beams, Carpenters”