The Story of Fund Milwaukee

A remarkable group of small fry investors have raised $300,000 to fund start-up businesses in the city. 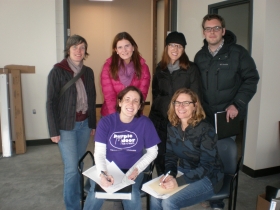 Eight Fund Milwaukee members made their first local investment in Purple Door Ice Cream to assist in their expansion in the Walker’s Point neighborhood of Milwaukee. Photo courtesy of Fund Milwaukee.

The idea for Purple Door Ice Cream goes back to a middle school kid named Lauren who loved ice cream. She and her girlfriends decided that when she grew up, she would run a neighborhood scoop shop called “Purple Door,” because purple was her favorite color.

Many years later that little girl met Steve Schultz, married and became Lauren Schultz. She also sold him on her middle-school fantasy. They started Purple Door Ice Cream in 2011, renting kitchen space in a Cudahy catering business, making their ice cream on nights and weekends, and marketing their business through t-shirts and word-of-mouth. Their move to the Clock Shadow Building at 130 W. Bruce Street would give Purple Door more visibility, but they needed a showcase: a scooping cabinet where walk-in customers could see the ice cream on display, watch it being scooped and talk to the owners. “It connects you to the community in a very personal way,” says Steve.

That’s where Fund Milwaukee came in. This unique group of investors provided $25,000 worth of loans to Purple Door on affordable terms (5 year payback at 4.5% interest) so the couple could buy the scooping cabinet.

Fund Milwaukee was founded by a small group of people lead by activist and real estate investor Juli Kaufmann. It was formed and began researching investments in 2011 and launched publicly in 2012. It now has 40 members who have invested a total of $309,000, and who may pick and choose which loans or deals they want their money to support. 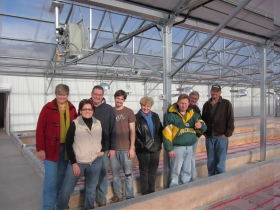 In addition to the Purple Door loans, the group has provided $10,000 in loans to Bolzano Artisan Meats, $9,500 in loans to Martha’s Pimento Cheese, $30,000 in loans to Central Greens (the new aquaponics company on 51st and Bluemound), and $150,000 in equity to help develop the Clock Shadow Creamery, which Kaufmann developed.

Fund Milwaukee is a unique approach to funding emerging businesses. The typical venture capital investor is a millionaire who puts money into numerous start-up companies and demands a huge return on the money, on the theory that some investments will go bad when the new company goes belly up. Fund Milwaukee is offering money at incredibly reasonable rates, typically at 4.5 percent for loans (with interest only due in the first six to 12 months) and the equity in Clock Shadow at a projected return of 3 percent to 5 percent.

“We are not venture investors,” Kaufmann says, “we are believers in Milwaukee and each other. Our returns are not only measured in an interest rate, but in building local businesses that mirror our values, in nurturing entrepreneurs that give back to our city and our people. This is not lip service, it is deeply meaningful to all of us.”

It is equally meaningful to companies like Purple Door. “You have people from the community—customers of ours—that are investing in our company,” Steve Schultz marvels. “They’re giving us loans to help us do better for ourselves and also for the city. When you think of the idea of actual community members, not big banks, actual citizens of the city, wanting to take that role on, it’s such a more powerful connection… it reconnects you to the community in a whole different way.”

When Kaufmann talks about Steve and Lauren, she doesn’t talk about “an investment,” but about “my amazing friends.”

And the group is careful about who it invests in. To date, it has had 19 requests for funding and has funded just six of them (that includes partial funding provided to Brenner Brewing Company and Coast In Bikes).

Fund Milwaukee is also interested in deals that promote sustainability and are sensitive to the environment. Clock Shadow arose in what was once a barren brownfield half-built from recycled materials, with a green roof, geothermal heating, rainwater for flushing the toilets — the whole nine yards. Some of Fund Milwaukee’s investors believed in Kaufmann, who seems to have a knack for rallying people. Others had a passion for holistic health care, economic development, local food, or the environment, all of which were represented in some way in the Clock Shadow building and its future tenants.

Fund Milwaukee considers a “triple bottom line,” with potential investments, emphasizing “people, planet and profit,” its members say.
It was while she was raising money for Clock Shadow that Kaufmann began to see the potential of joining together people who wanted to invest not just for the possible financial benefit, but at least as much for the impact they could have on the community.

“All these individuals in Milwaukee really believe in this project, but they’re not what we call accredited investors, or they don’t have enough money to pass the Securities and Exchange test to participate,” Kaufmann notes. The SEC rules have a threshold that tends to rule out those who aren’t wealthy, on the theory that wealthy people can make wiser investment decisions, and if they don’t, can better afford the losses from a bad investment.

Kaufmann’s group may have been smaller fry, but still invested every day in their 401(k)s or in their communities when they buy goods and services. So how could they join together as investors? As the group looked for answers, “we all got mystified and surprised by how hard it was to have a different model,” she says. But over time, they found a network of innovative thinkers across the country who were “stumbling along the same journey” with them, Kaufmann adds.

Through a North American network called the Business Alliance for Local Living Economies, Kaufmann’s group discovered the Local Investment Opportunities Network investing model. Kaufmann says it’s based on an SEC private offering exemption that lets businesses present investment deals to a group of “closely related persons,” meaning that potential investors and entrepreneurs who need funding have a pre-existing relationship and familiarity. That way, the deal can be considered a nonpublic offering. This solves the difficulties unaccredited investors have with accessing private deals the SEC says are too risky.

Membership in Fund Milwaukee therefore requires people to get to know each other and to get to know the entrepreneurs they may fund.
Fund Milwaukee’s membership is diverse. Many are Milwaukeeans, but the suburbs are represented too. Retirees, city government employees, a lawyer, an accountant, and a financial broker are among them.

Casanova, 30, is an employee for Milwaukee’s Department of City Development. “My passion is about growing the city and growing small businesses,” he says. “I try to do it every day at my job but there are limitations to that, and this is another way for me to do it.”

Casanova says there comes a point when beginning businesspeople may have tapped out their friends, family, credit cards or savings, but aren’t yet established enough to qualify for a venture capital loan or bank loan. Fund Milwaukee saw this gap in funding as an opportunity.

“Our goal is not to put all your life savings or your retirement into local companies,” Casanova said. “But you take just a small percentage of that… instead of having it sit in a savings account or a CD that’s earning under 1 percent, why not try investing in a local company? You make a higher return, you get to see a local company grow, you get some perks like some free ice cream. So it’s a little altruistic, but it’s also, so far, been a wise investment choice.”

And those investors tend to become supporters of the businesses, who may also serve as customers and informal marketers who spread the word about the company.

In the course of creating Fund Milwaukee, its members learned of another such group in Madison and a book by Amy Cortese published in 2011, “Locaavesting: The Revolution in Local Investing and How to Profit From It.” Cortese notes that Americans have about $30 trillion tied up in investments. Just one percent of that is $300 billion that could stay in America’s local economies and boost local businesses.

“Wouldn’t it be great,” Kaufmann muses, if Fund Milwaukee “had like 10,000 other Milwaukeeans, where we pool our money, and then those are meaningful loans to incredibly cool ideas?” 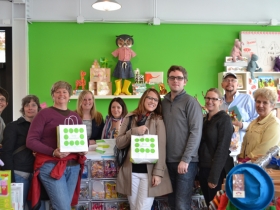 On May 5, 2012, Fund Milwaukee held its first Cash Mob at Little Monsters, a children’s clothing and toy store. Photo courtesy of Fund Milwaukee.

Of course, Fund Milwaukee’s person-to-person or high-touch model has limitations when managing a huge group. How do you manage a steady stream of business pitches and all the investors interested in them? A hybrid between online and high-touch interaction would be ideal, Kaufmann says.

Kaufmann thinks that within the next year, 100 percent of her own investments will be local. She’s convinced its less risky than traditional investment: “People abdicate an incredible amount of responsibility—their own money—giving it to people they don’t even know, investing in companies they have no idea about. I find that about as crazy as people think it might be to invest 100 percent of your resources locally.”

“The risks inherent in this system are so much more exciting than the risks with the Wall Street kind of financial system. It’s like, ‘well, we’re all in it together. It’s all Milwaukee.’”

And the idea is catching on. This month, Kaufmann expects to enroll another dozen or so members in Fund Milwaukee.

One thought on “The Story of Fund Milwaukee”