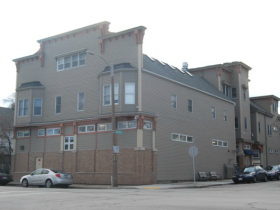 It’s easy to find the Hope House using the Allen-Bradley clock tower as your beacon. The center is just outside the shadows of the iconic structure in the Walker’s Point neighborhood on 2nd and Orchard. Opened in 1987, the Hope House began as temporary housing for those seeking shelter.

Many of the homeless it serves are children. According to the 2011 Annual Homeless Assessment Report (AHAR) for Milwaukee, there are approximately 3,500 people in Milwaukee without permanent residence, including an estimate 1,500 or more children. Some of these children live with their parents at Hope House. Others stop by for the after-school program in a special room on the first floor.

“Some of our kids travel from miles away by bus to come to the after-school program,” says Hope House Executive Director, Ken Schmidt. “It’s an important part of their lives.”

Colors of every shade fill the children’s room with murals depicting wild nature. Student volunteers from Milwaukee’s Institute of Art & Design painted the room years ago. An after-school meal greets the children as they hang up their coats outside of the room. A painting above the coat rack reads: Shining Stars.

Schmidt says that 80 percent of the students using the program are from the neighborhood, while 20 percent are from families living in the center. The average length a family spends in the center is four months. When things are impermanent, new faces are a way of life.

“We had to learn a technique to work on integration with the two different groups,” Schmidt says. “It’s really about the students themselves; we’ve formed leadership within the student body.”

The neighborhood children work hand-in-hand with the new residents as they adjust to a new life. They teach them how to behave, what boundaries not to cross, and more importantly, how to get the most out of the center. For the Shining Stars, friendship is as natural as is the need for math help.

Over the years, Hope House has evolved to focusing on other issues besides homelessness. “We do anti-crime, anti-graffiti work in the neighborhood,” Schmidt says. “We have a primary care health clinic which is here because of the shelter, but the majority of people that use it are from the area.”

The Angel of Hope Medical Clinic, which operates on the grounds of the facility and is a co-operative with Wheaton Franciscan Healthcare, served 3,636 people in 2011. There is also an emergency food pantry on site which serves the entire 53204 zip code. Schmidt says it is one of the only pantries that is open on Saturdays. In 2011, the pantry distributed food to over 10,700 people – including 4,300 children.

Hope House secures 98 percent of its funding through gifts and contributions, with the largest portion (64 percent) from government grants. According to the organization’s most recent federal tax form, its administration accounts for less than 6 percent of Hope House’s total expenses.

Ken Schmidt praises the staff and volunteers for helping 11 adults complete their General Education Diploma. The Pathways to Progress Adult Education offers educational and personal classes for low-income, less-educated adults. Schmidt believes there is a direct connection between education, employment and homelessness. 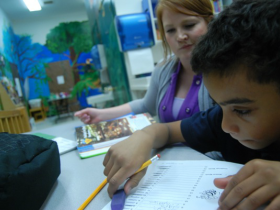 The Shining Stars program is a particular point of pride for staff. In 2011, the after-school program served 108 neighborhood and on-site youth and the number grew in 2012. The program has been in existence for 22 years now. Beth Neuens and her small staff manage the daily operations of the program.

“Did you read your 25 minutes yet?” Neuens asks a speeding youngster. “You know where the books are.”

Neuens, or Miss Beth to the kids, stresses the importance of daily reading. She says some of the kids have no idea of how talented they are. Miss Beth got involved with Hope House in September of 2011 while volunteering in the youth program. She started working for the center five months after that and in June of this year became the Youth Services Supervisor.

The staff offers intense one-on-one tutoring every school day for 2 ½ hours, which is followed by two hours of workshops. These workshops are designed to enrich the lives of the youths educationally, socially and culturally.

“We talk about what a healthy relationship looks like, or how to talk about the election,” Miss Beth says. “It’s really about teaching new behaviors.”

One recent teen night, the local YWCA came in and held a workshop focusing on resume building and interview skills. The idea was to prepare teens to apply for a job and start earning an income. Skills and talents of the group ranged across the board: math skills, Internet proficiency, and one 14-year old who had cash handling skills. He said he was in charge of over $200 daily.

The room that kids travel from miles around to spend their evenings in is a haven from the troubles that have invaded the world of their family or neighborhood. Here they can relax and feel safe, snack on fruit provided by the center, or seek guidance for anything on their minds.

“A lot of our students come here with a negative mind-set,” Miss Beth says. “We try to to show them something different — and have fun with them.”

For more on the Hope House: