He’s a numbers guy, not a people person. Yet he sings and dances in his spare time. 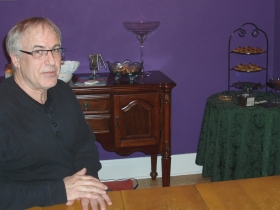 Brian Dettmering, CPA, doesn’t lack for work. He provides accounting services for 15 regular, monthly clients, has steady weekly clients, mostly small businesses in Riverwest, and at this time of year will prepare some 400 income tax returns. He even makes house calls of a sort: trekking to businesses to do their books. Dettmering is his own boss, the sole proprietor of Riverwest Accounting Services, operated out of his home since 2000, and sometimes he cuts himself a little slack.  His closest client is just two doors down, and on a recent icy morning, after making his way down the alley, Dettmering wondered if he could convince them he was late because of the weather. Maybe not.

In accounting terms, being his own boss has more assets than debits for Dettmering.  In the plus column, “I can do it whenever I want.”  He can take time off if work is slow, and if he can’t sleep at 3:00 a.m., he can get up and go to his desk.  “When you’re working for somebody else,” he says, “there might be no work to do, but you still have to sit there.”  As a sole proprietor, he’s more flexible; it’s just him that needs to adapt his business to revisions in tax laws, accounting software and even IRS policy changes.  This year, no federal taxes could be filed until after January 30, because of the potential tax changes arising from the fiscal cliff discussions.

Working at home could be entered on both the asset and debit sides. On the one hand, it’s convenient, the work is immediately accessible. On the other hand: “The worst aspect of working at home is your work is always sitting right there,” Dettmering says. “You get up in the morning, the work is right where you left it the night before.” 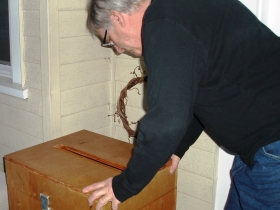 Clients of Dettmering can use the locked drop box on his front porch when he’s not home to receive their documents. Photo by Peggy Schulz.

Dettmering’s “pile” method for handling work wouldn’t get by in your average office.  “I put everything in a pile,” he says.  “My day is complete if I can get through one pile.  My own self-imposed deadline stresses me out, though,” Dettmering says.  He occasionally watches the hoarder program on TV, “just to make me feel better about myself.”

Dettmering has been an accountant for 30-some years.  He got his degree from Concordia College in Mequon. “I enjoy the sanity of numbers,” Dettmering says, “the logic of numbers.”

The logic of people is another matter. His move to start his own business came about primarily due to the impersonal style of the boss at the small accounting firm where he worked in the late 1990’s.  His boss would have his underlings talk to customers, rather than doing it himself.  “One tax season,” Dettmering says, “the boss fired someone by leaving a note on their desk.”  That did it. Dettmering figured he already had a computer and a desk at home.  So he gave notice to the boss by leaving a note on his desk, with just two words: “I’m leaving.”

The funny thing is, Dettmering admits he’s not really a people person, either. “People can be very selfish and demanding,” he says.  He’s trying to train all of his clients to use e-mail as the preferred method of contacting him. “I get too frustrated, too quickly, and then people call me crabby,” he says.  “But I don’t mind.”

He gets annoyed by the Quickbooks accounting software some people use to try to handle their accounts. “I correct many Quickbooks errors at tax time.”  He recalls two women customers who formed a cottage industry making tamales, called Mamasita’s Tamales.  When they first started the business, the women told Dettmering: “We want you to train us on Quickbooks.”  Dettmering’s response?  “I don’t make my own tamales, I buy them from the experts.”

Still, Dettmering says the best part of his job is the appreciation he gets from clients.  “I have people who marvel at my abilities,” he says.  “It’s not that amazing, really, but I’ll take the positive feedback.”

And for his recreation, he often performs with others. He’s a singer who regularly participates in the Plymouth Chorale at Plymouth Church on the east side.  And, he is a casual member of the Iberian Spanish Dancers, joining after an acquaintance told him they needed more male flamenco dancers.  He last danced with them at the Holiday Folk Fair in 2012. He’s even tried acting. Two years ago, Dettmering played the lead in a community theater production of “The King and I.”

A friend of his, Katherine Beeson, recently wrote a play called, “Is Murder Tax-Deductible?”  It will be performed this spring by the West Allis Players.  Riverwest Accounting Services is drolly referenced in the play as “the offices of Dett and Merring, Accountants,” which ends up being the scene of a murder.  Dettmering, the playwright told him,  had inspired her.

2 thoughts on “Working: The Singing Accountant”