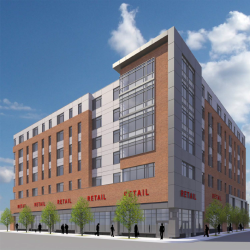 The Opus Group’s proposed six-story mixed-use building for 1400 West Wells Street, the corner of N. 14th St. and W. Wells St., received a key approval from the Common Council yersterday. The developer was requesting a change of zoning from Local Business (LB2) to a Detailed Planned Development (DPD) to allow for the building to be built on the site.  This request had been held for a special hearing of Zoning, Neighborhoods & Development Committee just prior to the Common Council meeting due to concerns over a portion of the design.  It was approved by the zoning committee on a 4 to 0 vote, with Ald. Willie Wade being excused.  Shortly thereafter it was approved by the full common council.

The hold was in response to Ald. Robert Bauman’s request for changes to the north side, the back, of the building to minimize the impact to the neighboring residents.  Initially the designs included a large blank wall, because city code didn’t allow the building to be built to the property line and have windows. Korb Tredo Architects, altered the designs to the north wall to include metal and cement panels, and details to create a level of depth to the wall.

The building will have 80 high-end apartments, which will include 10 studio, 10 one-bedroom, 45 two-bedroom, five three-bedroom, and 10 four-bedroom apartments.  The first floor will have a mix of retail uses, possibly a book store and fast food restaurant if tenants at the site currently are retained. Due to its proximity to Marquette University the project is geared toward MU students as potential renters. 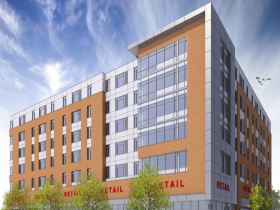 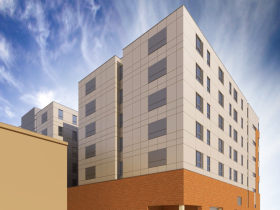 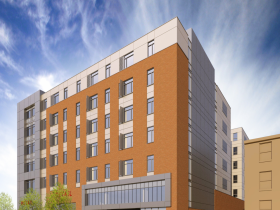