“We can’t have amateur hour running our schools for the next four years. Those who remember the TV show “[Original] Amateur Hour” knows it did not turn out that well.”
— Wisconsin Superintendent of Public Education Tony Evers 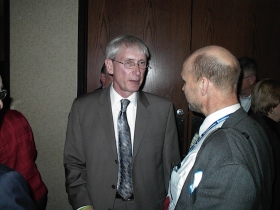 About 150 supporters of Tony Evers gathered at the Hyatt Regency Hotel Lakeshore Ballroom on Wednesday, January 23rd as he kicked off his campaign for re-election as state Superintendent of Public Instruction.

The superintendent is the only state constitutional officer to run on a non-partisan ticket, which you wouldn’t necessarily know from the campaign of his opponent, Rep. Don Pridemore, a Republican who represents the 99th District in the Assembly.

“We have differences, and the differences are on the record. We are as different as night and day,” he told the audience, which included Mayor Tom Barrett, Supreme Court candidate Vince Megna, Chair of the Milwaukee County Democratic Party Sachin Chheda, Rep. Jon Richards [D-19], Rep. Fred Kessler [D-12] and Rep. Evan Goyke [D-18] who was there with his father, former Sen. Gary Goyke. Betty Jo Nelsen, also a former legislator (but a Republican!) joined the festivities.  Also in attendance were numerous teachers, administrators and education union representatives in town for the Wisconsin Association of School Boards convention, which Evers had addressed earlier in the day. 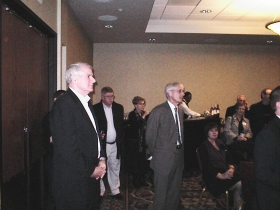 Evers said he has done the “right things” on “accountability, testing, technology and funding.”

Funding was also one of the topics of his campaign, he said, since he is obliged to “spend a lot of time raising money, which is not the most beautiful thing in the world. My opponent has access to money I will never have.”

Evers said a successful superintendent needs “experience, background and a broad coalition” of support to be successful in the position, characteristics he was happy to claim as his own.

Although Evers signed a recall petition against Scott Walker, he has “reached a common ground” with the governor, he said. (The governor later addressed the convention and promised an increase in public education funding.)

“That’s what leaders do,” Evers said, referring to the common ground that some feared might be a sellout. “But I will never sacrifice my principles.”

Evers told Urban Milwaukee that the Milwaukee Public Schools are “destitute for the resources the district needs to deal with its problems.”

“I am concerned about the quality of independent schools,” he added.

PRIDEMORE PRESENTS CHALLENGE FOR HIS BASE

Governor Walker, for his part, has said that he holds no grudge against Superintendent Evers, (the Evers-signed recall petition notwithstanding), but as of December had not decided whether to endorse either candidate in the election.

A Pridemore endorsement could be a tough call for the governor, since even such conservative voices as Charlie Sykes and James Wigderson have expressed doubts about Pridemore, who damaged his creds with them when he supported a “nullification” theory, asserting that Wisconsin should nullify federal health care legislation and suggesting state officers should arrest any Federal officials who come to the state to implement the dreaded Obamacare. This was a bit much for the conservative commentators.

Wigderson wrote “I am saying that the Pridemore campaign will founder and we should let it founder on it’s [sic] own.” He added, “Pridemore has gone beyond the quirky to full-jacket crackpot.”

Pridemore did himself no favors when he explained his nullification theory. Speaking in the third person, he wrote: “Rep Pridemore answered a survey 2 years ago that asked the question: If Wisconsin had a law on the books that made it illegal to establish ObamaCare exchanges in the state of Wisconsin, would you support arresting these federal officials? My answer was, yes, If anyone breaks our laws, it is up to our state law enforcement to arrest those individuals. Period. End of story. “ I suppose those undocumented Hispanic students in Waukesha County schools are probably violating Pridemore’s sense of law, as well. As Superintendent, he’d have a list of their names, and of their families’ names, as well as their addresses.

Plenty of Horne heard reports from two sources that Rep. Pridemore was an aggressive poll watcher during the November elections at Washington High School in Milwaukee. He did not respond to e-mails sent to his office, campaign office and campaign Facebook page. Pridemore, a Milwaukee native, included Washington High School as a stop on his statewide campaign announcement tour on December 4th 2012, so he’s familiar with the place, although he is a Wisconsin Lutheran graduate himself.

His nine-hour odyssey took him from Madison at 8 a.m to Milwaukee, and then to Green Bay and Wausau before winding up in Eau Claire at 4:45 p.m. This would tend to indicate a campaign expenditure for chartered air travel. Pridemore has received two tickets for speeding in the last two years, going double digits over 55 mph, but even that kind of leadfoot wouldn’t haul him all over the state in 8 hours. Let’s just hope he isn’t driving while suspended any more in an unregistered auto!

I asked Evan Goyke, new to the legislature, whether he has ever found himself heading down the wrong corridor in the cruciform maze that is the Wisconsin State Capitol Building. “All the time,” he said. You can take one wrong turn in that place and find yourself in the middle of a Supreme Court brawl if you’re not careful. … His dad said that when he was a State Senator he would have occasion to escort groups of the blind on a tour of the massive building. “They count their steps,” as a navigational aid, he said, “and would ask me if I wasn’t just leading them up and down the same corridor.”

An East Side native, Paul was one of the great walkers of this city, making his way about on foot — and making friends as he did it. He was a gentle spirit, and very well informed on the affairs of the day, including those of his customers.

Paul was one of the first in his profession to follow the writings in the city’s alternative press. At his death he was a subscriber to the print edition of the Milwaukee Journal Sentinel. In fact, it was the untouched newspaper outside his door that tipped off neighbors that something was amiss. He would have been amused at this ironic endorsement of the value of subscribing to the daily paper.

When word of his death first spread through the Milwaukee tavern hop vine on Friday, there was still some uncertainty regarding funeral plans.

As Germaine Bowers, a longtime friend said, “I don’t know what church the mass will be held at, since he went to all of them,” in his Sunday strolls.

It has since been determined that the services will be held at Holy Rosary, the church nearest his home, with burial to follow at Calvary Cemetery, 5503 W. Bluemound Road, where tavern signs still illuminate tombstones.

Here is a link to the death notice.

SCENE ON THE STREET

Pablove 4, a benefit concert for The Pablove Foundation, was held Saturday, January 26th 2013 at Turner Hall, 1034 N 4th St., drawing hundreds to the benefit for childhood cancer research. The benefit was inspired by the short life of Pablo Castelaz, who died of the ailment in 2009 at 6 years of age. He was the son of former Milwaukeean Jeff Castelaz, now president of Elektra Records in Los Angeles, who got his start in Milwaukee reviewing bands in the alternative press in the early 1990s. He later got into management and promotion, handling such bands as Citizen King before moving to the west coast.

The concert was produced by Scott Ziel, who got his start selling ads to concert venues in the alternative press before getting into promotion himself. He now works for Milwaukee World Festival, putting on a little gig called Summerfest each year.

One of the headliners on the bill that evening was the Kane Place Record Club, and Ziel and I reminisced on the name.

Citizen King, of course was a play on “Citizen Kane,” and in the late ‘90s the band was based at what was known as “The Compound,” a number of buildings located in the 1100 block of E. Kane Place, where I also lived. (Why, I had Eric Benet in my back yard when he was still worth talking about!)

Two of the buildings have since been razed, and two others preserved as part of the Kane Commons housing development, which has only one riverfront “Bluff Home” remaining according to real estate agent Katie Falk, who just sold one this week. … Further down the street, the Mandel Group is having an open house at its ONE at the North End, 1551 N. Water St., on the site of the former, dreadful, Pfister & Vogel tannery along the mighty Milwaukee River. The event will be Friday, February 1st, 2013 from 6 p.m. to 9 p.m. and will feature “The Spectacle! “ An immersive cinematic experience. A film in six genres, directed by six up-and-coming local directors, projected throughout the apartment homes,” because that’s the way we roll these days. … Get there early and then head to the Coffee House, 631 N. 19th St. where Louisa Loverage Gallas, Liana Kapelke-Dale, Desmond Bone and Bill Murtaugh will read at 8 p.m. The price of admission is $4 and two cans of food.

12 thoughts on “Plenty of Horne: Evers Vs. Pridemore”