Will City Get Bike-share Program?

Midwest Bikeshare has one-third of the money it needs to install 25 bikeshare stations with 250 bikes.

By Dave Schlabowske, Bike Federation of Wisconsin - Jan 25th, 2013 09:00 am
Get a daily rundown of the top stories on Urban Milwaukee 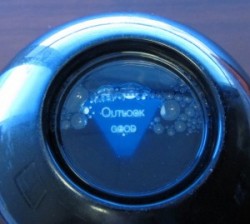 Recently announced grants have spurred hopes that Milwaukee may soon join most other major cities and have a bike-share system.  On Monday the 14th, it was announced that Midwest Bikeshare, Inc. received a $45,000 grant from the Funder’s Network for Smart Growth and Livable Communities. That grant will be matched with $75,000 from the Brico Fund.

With these grants, Midwest Bikeshare, a non-profit group set up to bring a bike-share system to Milwaukee, now has $500,000 of the estimated $1.5 million it needs to install 25 bike-share stations with 250 bikes. 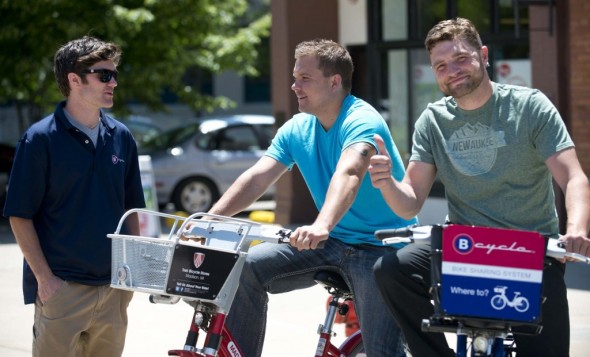 Thumbs up for the B-cycle demonstration in Milwaukee’s Third Ward last summer.

Bruce Keyes and Barry Mainwood, co-founders of Midwest BikeShare, Inc., said they remain hopeful they can raise the remaining funds and announce a Milwaukee system this year. “We are looking at a late June launch date, in time for Summerfest.  At this point, I will be surprised if it doesn’t happen,” said Keyes.

Mainwood agreed, saying he thinks the recent commitment of a matching grant from the Brico Fund will encourage local business improvement districts, college campuses, large office building owners and corporations who have expressed interest to get off the fence and commit to stations or sponsorship. 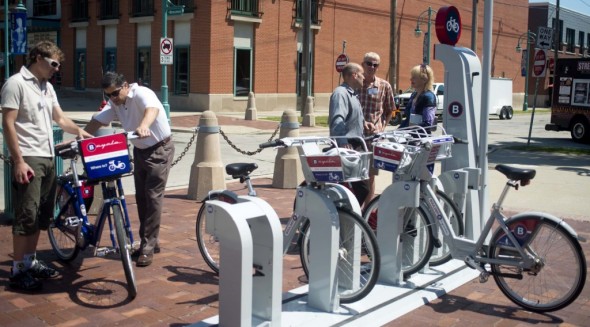 The kiosks are solar powered and wireless, so they can be set up quickly at any location. This one was part of the B-Cycle demonstration project in Milwaukee organized by Midwest Bikeshare last summer.

Because bike-share systems has proved so popular, 30 bike-share systems have sprouted up in medium to large cities all around the country in just the last handful of years, with more on the way. Chicago and New York are both set to launch large systems in 2013. I have written several times about the great Capital BikeShare in Washington, D.C. In the Twin Cities, Nice Ride Minnesota, now has about 1,400 bikes at 150 stations, and closed 2012 with 275,000 rides, up from 217,000 in 2011 and 100,000 in 2010. In all those years, only 4 bikes have been stolen or vandalized. 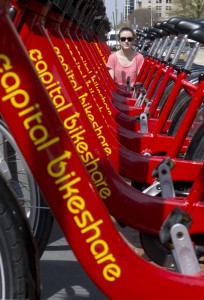 My daughter Frankie at a Capital Bikeshare kiosk in D.C. on our last trip there.

Bike-share systems are not like typical rental bikes. They are designed for short trips rather than all-day rentals. A kind of pedestrian accelerator, the closely spaced stations allow people to make trips that are too long to walk but issues of parking and traffic make them too short to make driving practical in urban areas. Typically trips less than so minutes are free after a person purchases an annual or short-term membership. The last time I was in Washington for the National Bike Summit, I bought a three-day membership and made all my trips from Arlington (where I was staying) to the Hill with the bike-share bikes. When my teen-aged daughter came out to visit at the end of the trip, we got her a membership too and that made getting around from museum to museum much easier for the two of us. 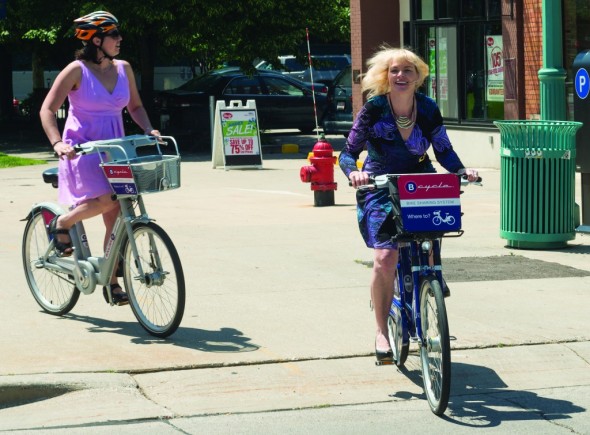 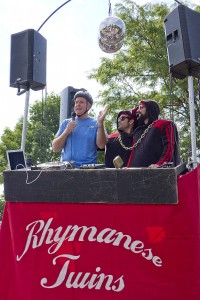 Bike-share in Milwaukee makes a lot of sense to link the campuses, central business district, and nearby neighborhood destination in Bay View, Brady Street, the East Side, Walker’s Point, Historic Third Ward, etc. By putting stations downtown and near the restaurants and retail stores in these neighborhoods, people who work downtown could get lunch or do shopping during their lunch hours, tourists and visitors staying downtown could see more of the city as well. Midwest BikeShare estimates it will cost about $15,000 a year to have a 10 bike kiosk, that seems like a no brainer for the hot retail neighborhoods with business improvement districts.

I am already fielding calls from visitors to Milwaukee who have come to expect to find a bike-share system where they travel for business. About a month ago I got a call from someone from Montreal visiting for a convention. He told me he was pleasantly surprised at the quality of the Milwaukee Art Museum, but didn’t have time to walk there between sessions at the convention he was attending. He asked if there was a bike-share system, but I had to direct him to a shop to rent a bike for the three days he was in town. That cost a lot more than a short-term bike-share membership would have.

Any businesses interested in sponsoring a kiosk or advertising with a Milwaukee BikeShare system should contact Jack Hirt, Barry Mainwood or Bruce Keyes at Midwest BikeShare.

12 thoughts on “Bike Czar: Will City Get Bike-share Program?”