Well, at least it has less than 18 other cities, according to a new ranking. Is that something to brag about? 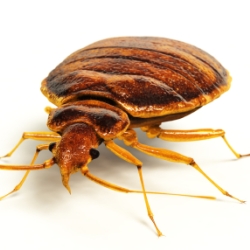 Thinking of traveling to Chicago for an overnighter? Think again. The city is crawling with bedbugs, according to a new ranking of metro areas in America by the experts in pests of all kinds, the Orkin company.

Or how about a stay in glitzy Los Angeles, or maybe the Queen City, as folks in Cincinnati like to call themselves.  Might be better to wait. LA ranks third on the list, and Cincinnati ranks fifth, which is at least a little better than last year, when it ranked first while Chicago was, well, the Second City.

All told, the Midwest is looking like it’s gone bugs, what with Chicago heading up Orkin’s list of infamy, followed by Detroit (ranked second), Cincinnati (fifth), Columbus (ranking first in Buckeyes and sixth in bedbugs) and Cleveland (8th). What is about a bedbug that it so loves Ohio?

That’s not to say the west or east coasts were spared, what with Los Angeles ranked third and Washington D.C. (7th) and New York (10th) making the top ten.

Meanwhile, the lowest-ranked (50th) city for bedbugs was Sioux City, Iowa, which come to think of it ranks pretty low for any kind of excitement.

Milwaukee’s relatively low ranking (32nd) two years ago is alas, no more: this year our city has jumped 13 places to a ranking of 19th. No, this is not great news but we still think VISIT Milwaukee could fashion some nice ads with a message like “Way Less Bed Bites than Chi Town” or maybe “Try LA for vermin, try Milwaukee for people,” which could also summon visions of slippery Hollywood agents.

Orkin, which by the way is a wholly-owned subsidiary of Rollins Inc., whatever that is, operates eight different pest control brands, and saw a 33 percent increase in bed bug business compared to 2011. Yes, business is booming, and that’s stock exchange symbol ROL, which right now seems like a good bet.

At the rate Milwaukee is going, we could hit number five next year. At that point, heads should roll, perhaps the honcho of Milwaukee’s health department, maybe the top dog at VISIT Milwaukee, or better still Mark Belling for not Standing Up For Milwaukee and warning us our hotels are going buggy.

Should any of this transpire, you can count on Orkin, and Urban Milwaukee, to report the details.

Correction: An earlier version of this story confused the years and thus had much of the data wrong. This is what comes from concentrating too much on the jokes and not enough on the data. Our apologies.

3 thoughts on “Milwaukee Has Fewer Bedbugs!”