Romney was the choice of exurban road warriors while slower-moving urbanites picked Obama. How we move through the world is a key difference between the parties.

As Paul Ryan noted, Republicans would be in the White House but for all those people packed into cities.  Ryan is no Nate Silver, but he has a point.  There is a sharp political line between urban and suburban, and even more so between urban and exurban. This race was arguably more about population density differences than red states versus blue states. 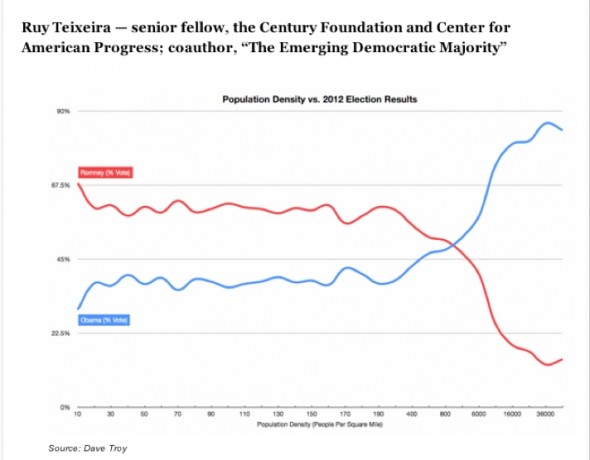 The vote for Obama was nearly unanimous in some of the densest areas of New York City.  In San Francisco, Obama took 83 percent of the vote. Milwaukee came in at 79 percent.  Just over the subcontinental divide, twenty miles from Milwaukee, Obama got only 33 percent of the vote in Waukesha County.

This difference can prompt all sorts of theories about urban togetherness versus isolated Republicans, but there is another way to look at this difference in density: It’s all about relative speed. The average Republican may drive longer and faster than Democrats.

Until the invention of the automobile, no one drove at more than 8 miles per hour.  An automobile could go a mile a minute.  It was a deal that no one in their right mind could refuse. An hour-and-a-half buggy ride from Fox Point to Milwaukee became just 16 minutes, or 74 minutes saved on one trip. Multiply that by ten, the number of trips to and from work, and according to this line of thinking you saved 12 hours each week.

My grandfather’s entire life revolved around the time traveled to work.   When he moved further out from the city he proudly noted, “it’s just 20 minutes from Downtown.” He  started out his journey to work at 4.4 feet per second and ended up at 88 feet per second or 60 miles per hour.  It was a great way to get to work, but 20 times faster than our eyes can track the world.

Think about it — at 60 mph, streets, homes, lawns, trees, skyscrapers, retail stores, cars and kids whiz by in a second.  Everything passes in a blur. Starting at 20 miles per hour humans lose eye contact with each other.  Elegant storefront windows are replaced by huge plastic signs that fly by in a half second. Large buildings are noted but not really noticed.  Cars compress space. Our vision narrows and blood pressure rises. Drive-time is a means to an end with nothing in between.

As a pedestrian, bumping into someone is often a pleasant experience.  Bumping into anything on a freeway is 15 times more likely to become a death sentence that driving on a city street at 25 mph. The same route, every day to work, back and forth, passing other anonymous humans, is a hostile act that pits you against the world.  You are on our own, locked into in more than a ton of steel, a half second from oblivion.

No wonder researchers have determined that many speeders are angry.  At 60 or more mph we have nothing to gain and everything to lose. Anything that slows our forward momentum is a problem and every year there seems to be more traffic and more “idiots” on the highway getting in the way.  Everyone complains about them.  All that traffic is caused by other people who have the same idea you do —  to make up time “lost” by finding ways to speed up, further depriving your senses and increasing your odds of death.

Drive time brings out the worst in all of us. We seem to keep losing the time we never really saved. As the daily commute becomes a hostile act where other people are a problem, maybe you feel a bit victimized, more open to the talk radio rants of a Sykes or Belling or Russ Limbaugh about a world going bad.  Maybe it’s not where you live so much as how you move through the world that makes the difference.

The world has changed since the early 20th century, when cities were cesspools of disease and pollution.  Back then, putting more space between everyone was hygienic. Moving away from the city became a rite of passage; outward mobility equalled upward mobility.

But today, cities are cleaner, and urbanites actually have better health than rural residents. Younger adults in their 20s and 30s are rediscovering cities, and the joys of walking or bicycling to work. Older suburbs like Shorewood or Whitefish Bay have far more density than exburbs, and are closer in lifestyle to Obama’s cities than Romney’s isolated islands of sprawl. Democrats live in communities where you are much closer to other people, more likely to bump into the neighbor, encounter foot traffic and linger at a coffeehouse, farmers market or corner bar.

The more isolated lifestyle of Republican voters was celebrated at the national convention, which conservative David Brooks criticized for “its rampant hyperindividualism. Speaker after speaker celebrated the solitary and heroic individual. There was almost no talk of community and compassionate conservatism.” Or for that matter, no talk of car pooling. Most Republicans are driving that long commute all by themselves and trying to restrain their rage at all the idiots in the next lane.