A bit of fake Milwaukee history, some questionable MATC ads, and debunking a war on pot. 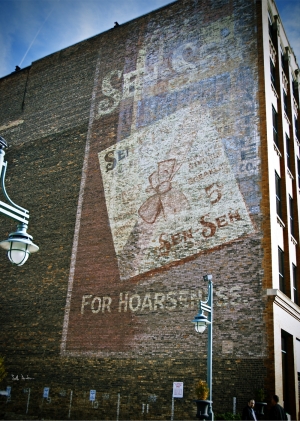 Talk about getting your history wrong.

The city’s most prominent “ghost sign,” an ad for Sen-Sen on the north wall of the Broadway Theatre Center, 158 N. Broadway, is the centerpiece of “Collage: The Pilot” a video by Kurt Raether of Plaid Tuba that explores the city’s wealth of faded late 19th century and early 20th century outdoor advertising signs. On-camera experts including Michael Drescher and Faythe Levine wax ecstatic about the sign. Levine says the reason it lasted so long is that it was made with lead paint. Modern signs would never last as long, she tells us. The magnificent specter inspires her to think about “the people who made it,” conjuring for us images of immigrant laborers toiling in the city’s early commercial district as the smoke of the great Third Ward fire of 1892 cleared.

As Rosemary Lane wrote in “Ghost Signs” in the December 2010 issue of Milwaukee Magazine, the sign was painted in 1968 for the movie musical “Gaily, Gaily,” which was set around 1910 and filmed in part in Milwaukee. Furthermore, this sign was repainted in 1993 when the Skylight Music Theatre moved into the joint. So the centerpiece of this documentary, alas, is not even 20 years old.

Perhaps future episodes of this promising series will be more vigorously researched. There are ample historic photographs in Milwaukee collections that could document these original signs before they faded into ghost-like images,  which should aid in their identification and dating.

A questionable advertisement for Milwaukee Area Technical College [MATC] aired recently on television. In it two women discuss a home purchase, with one saying she wants her children to attend a good school. The other woman suggests Oak Creek, Mequon or West Allis, where MATC has campuses, suggesting the lucky children could grow up to be police officers, firefighters, or heck, any number of other careers taught at MATC. However, nowhere in the advertisement is the MATC main campus, located in downtown Milwaukee, ever mentioned. By extension, since the ad is focused at people with young children, the Milwaukee Public Schools are also dissed. This advertisement strikes me as a blatant pitch for suburban support at the expense of city residents who make up the bulk of MATC students, and the Milwaukee Public Schools, which likewise provide more students to MATC than any other school system. The technical college receives over $650,000 annually through its Emerging Scholars Program to educate MPS students who are at risk of not graduating from high school. MATC spokesperson Kathleen Hohl did not respond to repeated requests for information and for a copy of the ad.

Milwaukee native Issa Kohler-Hausmann has issued a report for the Human Rights Watch entitled, “A Red Herring: Marijuana Arrestees Do Not Become Violent Felons”. Her study debunks the claim that vigorous enforcement of the city’s marijuana laws deters violent crime.

The city instituted its get-tough approach in 1994, when there were 1,800 misdemeanor pot arrests in the city. By the turn of this century, arrests numbered over 50,000 annually, with over 500,000 arrested in the past 15 years. Possession of small quantities of marijuana is the number one offense in New York City, which has over 90 per cent of all marijuana arrests in the entire state, despite having only 42 per cent of its population. Yet fewer than 4 per cent of those arrested later are found guilty of violent crimes — which is where police should concentrate their efforts, she asserts.

The arrests are a waste of police resources, an interference with the rights of the public, and ineffective, Kohler-Hausmann says. They also overwhelmingly target young minority males.

“As long as they keep arresting people and making them pay such a heavy price for possessing marijuana in public view, New York City officials owe the public an explanation for how these arrests contribute to public safety.

“If these arrests have crime control benefits that outweigh the costs, public officials have yet to identify them,” she said.

Her comments were echoed in a New York Times editorial which cited the study. [“An Ineffective Way to Fight Crime.”]

Glorioso’s Italian Market moved to its 1011 E. Brady Street location in November 2010, leaving its old location across the street at 1020 E. Brady Street empty. Last Friday, the old place reopened as a demonstration kitchen / classroom with an appearance by New York City chef Michael De Georgio and John Coletta of Chicago. … Not far away the former Redroom 1875 N. Humboldt Ave. is scheduled to reopen as “Fink’s.” The operators will be Leslie Montemurro and Scott Johnson, who also own Bel Air Cantina across the street at 1935 N. Water St. and any number of other properties across town. … The old folks at St. John’s on the Lake, 1840 N. Prospect Ave. will be able to buy their drinks legally — just like the rest of us — if the Class “B” tavern license for the Episcopalian home is approved by the Common Council. The license would apply to its restaurants and common areas, which have never been “dry” from my personal observation. “I.D., please.”…

Plaid Tuba (“Manufacturing Creativity”), a Reginald Baylor project, moved from its location at 120 N Broadway last week to its new quarters in the Marshall Building, 207 E. Buffalo, Suite 600. (Baylor already had space in the Marshall.) Bob Monnat of Mandel Group, also of 120 N. Broadway, says a number of people have expressed interest in the old space which overlooks Catalano Square and the Broadway (or is it Young Street?) bridge.

One thought on “Plenty Of Horne: The Ghost Sign That Wasn’t”