Observe the Wonder of the Moon 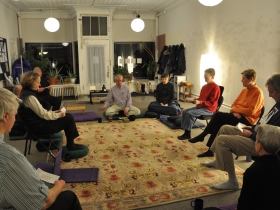 In the heart of Milwaukee’s Upper East Side, on East Park Place, is a modest brick building. Something about it makes people walking by curious enough to cup their temples and press their face to the window for a peak inside.

The Milwaukee Mindfulness Practice Center has quietly been a place for people to come together and share their experiences with mindfulness for nearly 20 years. They call this meeting a sangha, one of the three gems of Buddhism meaning “group” or “community.”

Bob Weiss has been attending the center for four years. He volunteers in leading Saturday morning sessions.

The sangha practices in the tradition of Thich Nhat Hanh, a Vietnamese monk and peace activist. He is a well-recognized figure in the world-wide Buddhist community, perhaps second only to the Dalai Lama.

The Mindfulness Community of Milwaukee was established in 1993 after several people attended a retreat with Thich Nhat Hanh in Illinois, including the center’s president, Paul Norton.

The group met in members’ homes for the first five years, then found a regular location on Milwaukee’s East Side. The community has been using its current location at 1922 E. Park Pl. for about four years now.

The Thich Nhat Hanh tradition is one of the least dogmatic takes on Buddhism, according to Weiss. People of all backgrounds and beliefs are welcome to participate.

Indeed, the center fosters a welcoming atmosphere. New faces are warmly greeted and people introduce themselves as they pass a stone around during discussion. During breaks, the sangha sips tea and converses in the back of the room.

Different sessions are offered throughout the week. On Monday through Friday there is sitting meditation from 6:30-7:00 a.m. Wednesday evenings combine sitting and standing meditation with readings and discussion. Saturday mornings feature a briefer meditation period, leaving more time for discussion and socializing.

Beginners are always welcome, but there is an introduction to the center and meditation instruction the first Wednesday of the month.

All sessions are free and open to the public. The center is self-sustaining, operating through the donations of members and the time of volunteers.

A free introductory booklet explains how to perform sitting and walking meditations. The main priority during meditation is concentration. Human minds are constantly racing with thoughts — the work yet to do, the dishes in the sink, the rude cashier at the store, the recent dispute with a loved one.

Meditation is about centering the mind so you can look at these things more impartially, without the immediate reactions of our emotions. Most people choose to focus on their breath to center their thoughts, but one may also choose to concentrate on an object or a mantra.

In sitting meditation, the basic steps are to sit up straight and follow your breath. There are different breathing patterns you can follow, but the most important step is to return your concentration to your breath when you catch your mind wandering.

“When thoughts come, we don’t reject the thoughts. We just kind of observe them, treat them somewhat neutrally, and then return to the object, which could be a mantra or the breath,” says Weiss. “In that way, we get moments of stillness.”

In walking meditation, the sangha circles the room inhaling on one step, exhaling on the second. According to the introductory booklet, you should “really feel your feet massage the earth.” It is one time where it is perfectly acceptable to wobble in public.

People come for different reasons. Lisa Kaemmerer says she comes to escape those things in life that keep her busy — work, family, friends — and the center gives her a place to clear her mind.

Paul Brodwin is a professor of anthropology at UW-Milwaukee who began reading about Buddhism in the 1970s when he was a college student. He learned meditation from a visiting Sri Lankan professor who was also a Buddhist monk.

“The teachings immediately made perfect sense to me,” says Brodwin. “And the meditation process has helped me deal in a balanced way with the inevitable ups and downs of life.” Brodwin has been going to the center since 2000. He appreciates the egalitarian spirit of the sangha. “No one is a guru, and there are basically no other distinctions of rank,” he says.

Meditation can have positive effects on our minds, but also on our bodies. “Very often we are living out of our fears, our insecurities, our knee-jerk reactions because of the way the brain operates,” says Weiss. “That creates adrenaline and cortisol and the fight-or-flight syndrome.”

Too much of these chemicals can lead to long-term physical health problems. “If we can learn to let go of the thinking that causes so much of that [negative attitudes], we can be healthier,” says Weiss.

Martha Spencer is a member of the center who says meditation’s anxiety-relieving properties are gaining more attention. She says that more people are using mindfulness to supplement their prescribed treatments for stress-related conditions.

But is it for everybody? No, says Brodwin. “Obviously, some people are perfectly happy with their own religious path, or lack thereof.”

“Meditation is one method of learning mindfulness,” says Weiss. “It’s a powerful method. It may not be right for everybody.”

Still, Weiss says people are capable of meditation if they achieve enough practice and discipline. And there are ways to meditate that do not involve sitting for an hour, or even fifteen minutes, he adds: “We can learn to take mindful breaths throughout the day and just try to clear our heads and see the moment for what it is. You can walk outside and see the blue sky. You can look at the stars, the wonder of the moon, air that envelops this earth and that we breathe and becomes part of every cell of our body. It’s all kind of a wonder, and if we slow down and just observe this moment, that’s what mindfulness is about.”

One thought on “Observe the Wonder of the Moon”