Witkowiak Runs Off to Siberia

The former alderman is an obsessive marathon runner. And the city gets 2000 more trees. 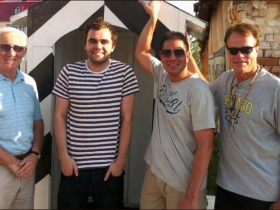 James Witkowiak, first from the right, pictured a day before the start of 2012 Omsk International Marathon. Picture: Stuart Warren, courtesy of the Siberian Times.

Everybody likes a good “where are they now?” story. So if you’ve been wondering what former Alderman James Witkowiak has been doing since losing his seat to Jose Perez in the April 2012 election, the answer is running —  all over the world.

Witkowaik started running when he was 47, and in the 15 years since he has completed 34 marathons. Having set a goal to complete 100 in his lifetime, with one marathon each year to be run overseas, he has quite a bit of running around left to do.

This past year Witkowiak’s running took him all the way to the Omsk International Marathon in Siberia. In a story by the Siberian Times, Witkowiak is quoted explaining the response of his friends when they learned he was off to Siberia to run in a marathon. Oh, “this is the one where you wear snowshoes?” they asked.

In fact, race day in Omsk, Siberia could not have been any further from cold and snowy. It was a 100 plus degrees, causing many runners to drop out, but not Witkowiak.  In fact, he says he ended up winning his age group and according the Siberian Times story he finished in five hours 29 minutes. Still, that was “Not too good by my standards,” he says.

Guerrilla Urbanism can be thought of as any small public improvements made by citizens with the intent of enhancing their community, but not necessarily with the approval of the property owner or local municipality.  In many cities guerrilla gardening is carried out by people who under the cover of darkness covert long-time vacant lots into gardens.

In October Michael Horne reported for Urban Milwaukee about an act of Guerrilla Urbanism here in Milwaukee. Swings were installed by Keith Hayes‘ beintween.org organization underneath the Holton Street Viaduct.  At the January 9th, 2013 meeting of the Public Works Committee the committee took surprising action and voted unanimously in support of two files related to these swings.  First, the committee voted to accept the swings as a donation. And secondly, the committee voted to rename the Marsupial Bridge Media Garden as the Marsupial MaTIREal Garden, in recognition of the efforts of beintween.org, and to help draw attention to the use of recycled vehicles tires in the swings.

At the January 9th, 2013 meeting of the Public Works Committee the committee voted to accept a U.S. Department of Agriculture Forest Service Great Lakes Restoration Initiative Grant, which will provide the city $100,000 for the city to purchase and install 2,000 new trees.  The thrust of this effort is to increase the city’s tree canopy from 21.6 percent to 40 percent, because an increased tree canopy can help to reduce runoff, minimize the urban island heat effect, and improve air quality. The city plans to begin planting new trees in Fall 2013 and again in Spring 2014. The grant will target placement of trees on private property and will be voluntary to those property owners who wish to participate in the program.

Support for accepting the grant was unanimous. Ald. Bob Donovan, often not a supporter of government programs, was bullish on this grant, saying, “I wholeheartedly support  this.”  Donovan went on to suggest looking at properties on 35th St. between Lincoln Ave. and Rodgers St., and asked that the city work with the Layton Boulevard West Neighborhood Association. Ald. Bob Bauman also lent his support to the measure, and kidded “there’s a house on 29th and Kilbourn that could use a few trees.”  His suggestion drew laughs.

-Sean Ryan, of the Business Journal, reports that Northwestern Mutual’s TIF request will go before the Redevelopment Authority of the City of Milwaukee at the January 17th, 2013 meeting.

-I just wanted to give a quick mention of Patricia Murphy (we worked together in a former life), being named to the Bicycle and Pedestrian Task Force.  As a dedicated bike commuter and part of the bike team at Northwestern Mutual she is a great fit.  Asked during the Public Safety Committee meeting as to why she wanted to be on the task force, she responded, “I just love to ride my bike.”

2 thoughts on “Eyes on Milwaukee: Witkowiak Runs Off to Siberia”