New Water St. complex has 87 apartments, many with a river view. And the Business Journal begins the push to pressure taxpayers for a new arena. 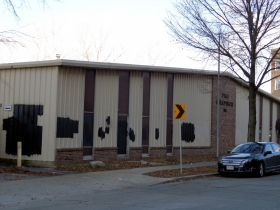 As has been reported by multiple media organizations, HSI Properties LLC is working to develop an 87-unit, four-story, market-rate apartment building at 1887 N. Water St. along the Milwaukee River, just west of Humboldt Avenue.  At a recent neighborhood meeting the project team from HSI Properties and Eppstein Uhen Architects presented additional details about the project.

The units will have “condo like finishes,” explained Ryan Schultz, Co-owner of HSI Properties.  They will include such amenities as a washer and dryer in each unit. About half of the 87 units will be one bedroom apartments, 25 percent studios and the remainder a mix of two and three bedrooms. When complete the units will rent for $1.70 to $1.80 a square foot. “We think there is pent up demand for this type of housing,” Schultz said.

The building design has two primary frontages it attempts to address: Water St. and the Riverwalk. Below grade there will 97 parking spots, with only one curb cut along Water St., allowing for minimal impact to pedestrian traffic.  On the street side the building will have metal shingles hung on the masonry facade. Along the river the project will include a new Riverwalk section, and a plaza with a swimming pool raised five feet above the Riverwalk. Below the Riverwalk there will be planters at the river level, patterns and windows in the riverwall, and windows that daylight the garage. Said Schultz, “we want this building to function well and also look good.”

During last week’s neighborhood meeting public input was taken and neighbors were able to raise concerns. The number one concern revolved around insuring that the exhaust fans were not noisy as that has been a problem with a neighboring building. Ed Richardson, a city employee and neighboring resident, was concerned about how close the building would be to the building next door and if it would cast shadows on his unit.  The project team explained that buildings will be about 22 feet apart and a shadow study will be conducted. One resident complained that this will make Water St. too much of a tunnel, that it is “looking like Chicago.” Responded project architect Chris Gallagher, Design Principal for Eppstein Uhen Architects: “the idea was to create something urban in character.”  Ald. Nik Kovac added, “we do want buildings on Water St. flush with the sidewalk.”

Although the plan calls for a mixed-use project for this site, it is currently zoned Industrial Light 2.  For the project to move forward it will need to receive a change in zoning and will go through the typical city approval process. If all goes as planned, HSI Properties will submit their zoning change request in January 2013 with approvals to come in February.  Demolition of the existing building on the site, the former home of Pro Graphics Inc., would start in April, 2013 and construction, depending on the weather, will take about 12 months. -Dave Reid

I hold elected representatives to a higher standard, especially when it comes to written communication. That higher standard applies to social media, even though Twitter limits a message to 140 characters. With that in mind, I give you the first installment in a new series, “Name That Representative.” Which elected official tweeted the following message?

Field of Schemes, a former Urban Milwaukee Book Club selection, lays out the playbook owners use to land a new publicly-financed stadium. It’s discouraging to see some of the tactics described starting to take shape in Milwaukee regarding a Bradley Center replacement, including the threat to move the team.

Rich Kirchen, senior reporter at The Business Journal Serving Greater Milwaukee, recently penned a pile of articles about Oklahoma City and the use of a sales tax to build their arena. He’s followed that up with an article that tosses out Louisville as a city where an NBA team like Milwaukee could relocate.

While Herb Kohl (who is set to be full-time with the team in a few weeks) and the Milwaukee Bucks would be wise to use every move in the book to get a new arena, it’s up to the public to be smart enough to see through them and drive a hard bargain. With that in mind, the potential relocation threat is lining up nicely for the Bucks (especially considering Seattle is moving ahead with a replacement arena and has yet to find a team), but will the public buy it?

Earlier this week we asked you to weigh in with your thoughts on combining a sales tax for transit with a new arena. Let us know in the comments on that article.

Full disclosure: I’m a Milwaukee Bucks season ticket holder, and about as conflicted on publicly funding a new arena as they come. – Jeramey Jannene

–Sean Ryan, of the Business Journal reports that Brian Taffora “will be laid off Dec. 28 as a result of an amendment to the 2013 budget.” Taffora, the head of economic development, has announced he will be leaving. Hopefully, County Executive Chris Abele will avoid such issues with his next hire, and just pick a Milwaukee County resident. There’s almost a million of us; certainly there is someone qualified to do the job.

-The Return of Johnny V:  Ryan reports that Johnny Vassallo, of Mo’s, is back with plans to finally redevelop the Posner building, but this time as apartments. In recent years a number of hotel projects had been proposed for the site, only to fall through.  It’s good to see something moving ahead finally, but Johnny V might be missing a golden opportunity: I was looking forward to Mo’tel Milwaukee.

7 thoughts on “Eyes on Milwaukee: Watching the River Flow”